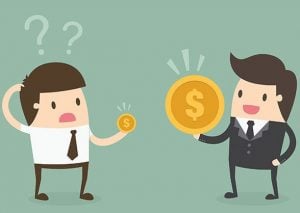 September 26, 2016 – Low pay is the top reason why applicants turn down jobs, while lack of advancement opportunities is the main reason employees leave jobs, according to a just-released survey of businesses released by Express Employment Professionals. The report was designed to reveal the hurdles that stop applicants from accepting jobs, as well as the top reasons employees leave them. What’s next for executive recruiters is to assist client companies in talent retention.

Respondents were asked, “What hurdles stop applicants from accepting a job at your company?” Low pay topped the list at 28 percent, followed closely by lack of advancement / opportunity at 27 percent. Long hours was cited by 18 percent, 15 percent listed perfect fit, and 14 percent selected inflexible schedule.

The report also asked, “What hurdles cause employees to leave a job?” The top answer was lack of advancement / opportunity with 40 percent. Second was low pay at 29 percent. This was almost the reverse of results from the same question in 2015, when 40 percent said low pay and 33 percent said lack of advancement. Not a good cultural fit was the third highest answer at 28 percent, followed by long hours and unlikeable boss / management, both at 18 percent.

“Pay and advancement really do seem to be the driving factors when applicants and employees make decisions about the future of their careers,” said Robert Funk, chairman and chief executive officer of Express. “In a way, this is reflective of the economy in general. Many companies still struggle to offer competitive wages and may not be growing fast enough to offer upward advancement.”

Other studies have shown the obvious importance of pay when looking for their next employer. Yet, many workers feel they must find a new job to receive a pay raise.

More than half of employees globally (56 percent) believe they must switch companies in order to make a meaningful change in their compensation, according to the ‘Global Salary Transparency Survey‘ released by Glassdoor. Perception among employees appears to be that the grass is greener elsewhere, as many believe they could earn more at another company. Close to half (49 percent) of U.S. employees feel they must switch companies in order to obtain any meaningful change in compensation.

Employers will continue to reward their best performers with significantly larger pay raises as they look for ways to retain their top talent and strengthen existing pay-for-performance cultures, according to a survey released by Willis Towers Watson. The survey found virtually all respondents (98 percent) plan to give employees raises next year, with salaries for exempt non-management employees to increase three percent.

A separate recent Korn Ferry Hay Group ‘Salary Forecast study’ found that workers are expected to see wage increases of 2.5 percent, the highest in three years. “This year’s global salary forecast shows that for the majority of countries real wage increases are set to be the highest in three years,” said Philip Spriet, global managing director for productized services at Hay Group. “Differing macro-economic conditions means there are stark variations globally, but overall decent pay increases, coupled with extremely low (and in some cases, zero) inflation, mean that the outlook is positive for workers.”

According to the survey, companies focusing on offering ‘higher salaries’ and ‘promoting quickly’ alone may not be as competitive when recruiting talent, with responses at just six percent and five percent respectively.

“Focusing on culture and how that brand is represented in the marketplace has a critical impact on attracting and retaining the talent that will drive business success,” said Neil Griffiths, Futurestep global practice leader – talent communications and employer brand. “The survey results indicate that employers need to think more broadly about what attracts top talent to their organization.”

A separate Korn Ferry study shows that the top factor that improves people’s feelings about their job is working for a company whose culture aligns with their values. This study found that executives report the most widely used strategy to improve culture is “communications,” followed by “leadership development,” and “embedding culture change in management objectives.” In addition, it found that “improving organizational alignment and collaboration” is the primary reason executives choose to focus on improving culture, followed by “improving organizational performance.”

“Culture is no longer seen as an afterthought when considering the business focus of an organization,” said Mr. Rabinowitz. “Culture is the X-factor. It’s the invisible glue that holds an organization together and ultimately makes the difference between whether an organization is able to succeed in the market or not.”

According to a global study of senior executives by Egon Zehnder, mounting evidence shows optimal performance comes from the alignment of an executive’s personal values with an organization’s culture and the role’s responsibilities, yet few executives or organizations have made the adjustments necessary to take advantage of this synergy. The report found that only 40 percent of executives said their organization helps them unlock their potential.

Seventy-four percent of HR leaders have identified leadership succession and speed of development as the primary internal challenges they face, according to a survey by talent solutions provider Lumesse and research company Loudhouse.

While career advancement and development continues to be one of the most important services to be offered by employers, companies also understand the importance it has for attracting and retaining the best talent.

“In prioritizing all of the elements that go into building a successful business, it would seem that many corporate heads consider leadership development to be a low priority ‘nice to have’ instead of a strategic imperative,” said Niels-Peter van Doorn, head of leadership consulting at Borderless. “While most argue that effective leadership is necessary to achieve positive business results, the lack of focus on development suggests that leaders are expected to possess all essential leadership skills innately.”

In response to reports of the lack of leadership development among companies, a handful of executive search firms have added or expanded this service to address these growing needs. Here is a look at five of them, by way of partnership, acquisition or new launch: