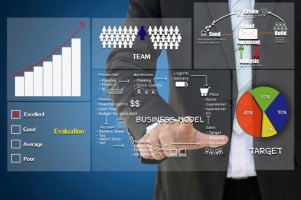 February 17, 2016 – Executives see the need to make culture a priority to drive alignment, collaboration, and performance, according to the recently released ‘Real World Leadership’ study by Korn Ferry Hay Group. The report, which polled more than 7,500 executives from 107 countries, found that “driving culture change” ranks among the top three global leadership development priorities.

The report affirms the critical role that leaders play in steering culture. Executives reported the most widely used strategy to improve culture is “communications,” followed by “leadership development,” and “embedding culture change in management objectives.”

Yet, research finds the alignment between strategy and culture is more often the exception than the rule in most organizations. In a 2014 Korn Ferry survey, 72 percent of respondents agreed that culture is extremely important to organizational performance. However, only 32 percent said their culture aligns with their business strategy.

The findings suggest that organizations need to make culture change a more significant aspect of their leadership development programs and overall leadership agenda.

“Culture change occurs, ultimately, when a critical mass of individuals adopt new behaviors consistent with their organization’s strategic direction,” said Mr. Rabinowitz. “Leadership development can be the most effective tool to change behaviors. And when leaders change their behaviors, others do so, too.”

“We believe that talent, leadership, and culture are intrinsically linked, and they are crucial to strategic execution,” said Arvinder Dhesi, a KF Hay Group senior client partner. “It’s a mistake for top leaders to believe that culture is somehow separate from themselves or a separate project. Everything that we do contributes to the culture. There’s no culture-neutral behavior.”

A separate study released by Korn Ferry Futurestep found that nearly two-thirds (61 percent) of executives said organizational culture was the most important recruiting advantage for global organizations, followed by possessing a leading employer brand at 26 percent.

“Focusing on culture and how that brand is represented in the marketplace has a critical impact on attracting and retaining the talent that will drive business success,” said Neil Griffiths, KF Futurestep global practice leader for talent communications and employer brand.

Senn Delaney, an international culture shaping firm owned by Heidrick & Struggles, has shown through its work with hundreds of companies around the globe that successful culture transformation is possible. Mike Marino, a Senn Delaney partner and executive vice president, said four key principles must be followed to get it done: 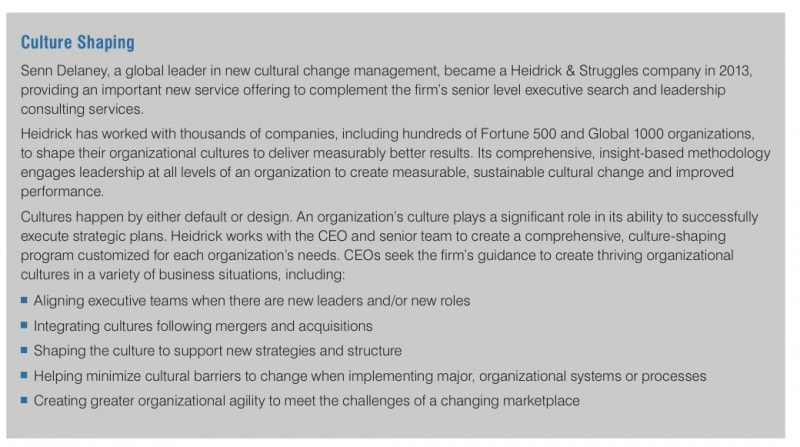 Mr. Marino said that culture shaping is not about providing a detailed list of actions leaders should take to effect change. Rather, it’s more about recalibrating how they think and behave, and in turn how everyone in an organization thinks and behaves. “We try to create a mindset,” he said.

Organizational culture has reached a tipping point, said Senn Delaney founder and chairman Larry Senn. Dr. Senn is a pioneer in the field of corporate culture and has led culture shaping engagements for CEOs and other leaders of dozens of Fortune 500 companies, state governors, deans of business schools and presidents of major universities in a career spanning more than 37 years.

“Every company has its own unique culture, defined by a collective set of values and habits that condition actions of people within the organization,” he said. “Cultures happen either by default or design, and successful leaders shape their cultures instead of allowing their cultures to shape the company.”

Most CEOs know that culture matters (“Culture is driven from the top down,” he said) and that it can have a strong impact on business results. “Companies that focus on culture are becoming icons for job seekers, especially the future generation of leaders who place a premium on work-life balance and culture fit in choosing where to work.”

What Attracts Top Talent to Companies? This Might Surprise You Work Culture Seen as Leading Motivator Among Senior Executives