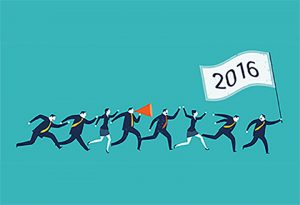 September 13, 2016 – U.S. employers indicate a slight increase in hiring plans for the final three months of 2016, according to the latest Manpower Employment Outlook Survey, released today by ManpowerGroup.

Taking into account seasonal variations, the Net Employment Outlook for the fourth quarter is up 18 percent, which matches the strongest post-recession Outlook since 2007. Hiring plans nationwide improved by three percentage points compared to the previous quarter, with all 13 industry sectors planning to increase their payrolls.

When compared to Q3 2016, mining sector employers across the U.S. anticipate a considerable increase in hiring. Moderately stronger hiring activity is expected by employers in the leisure & hospitality sector while slightly stronger hiring prospects are reported for government, financial activities and wholesale & retail trade sectors.

Net Employment Outlooks strengthened in all four U.S. regions surveyed when compared with the third quarter. Hiring prospects are slightly stronger in the Northeast, the South and the West when compared with Q3 2016. In the Midwest, the Outlook remains relatively stable. Compared to one year ago at this time, hiring plans are slightly stronger in the West and remain relatively stable in the Midwest, the Northeast and the South. 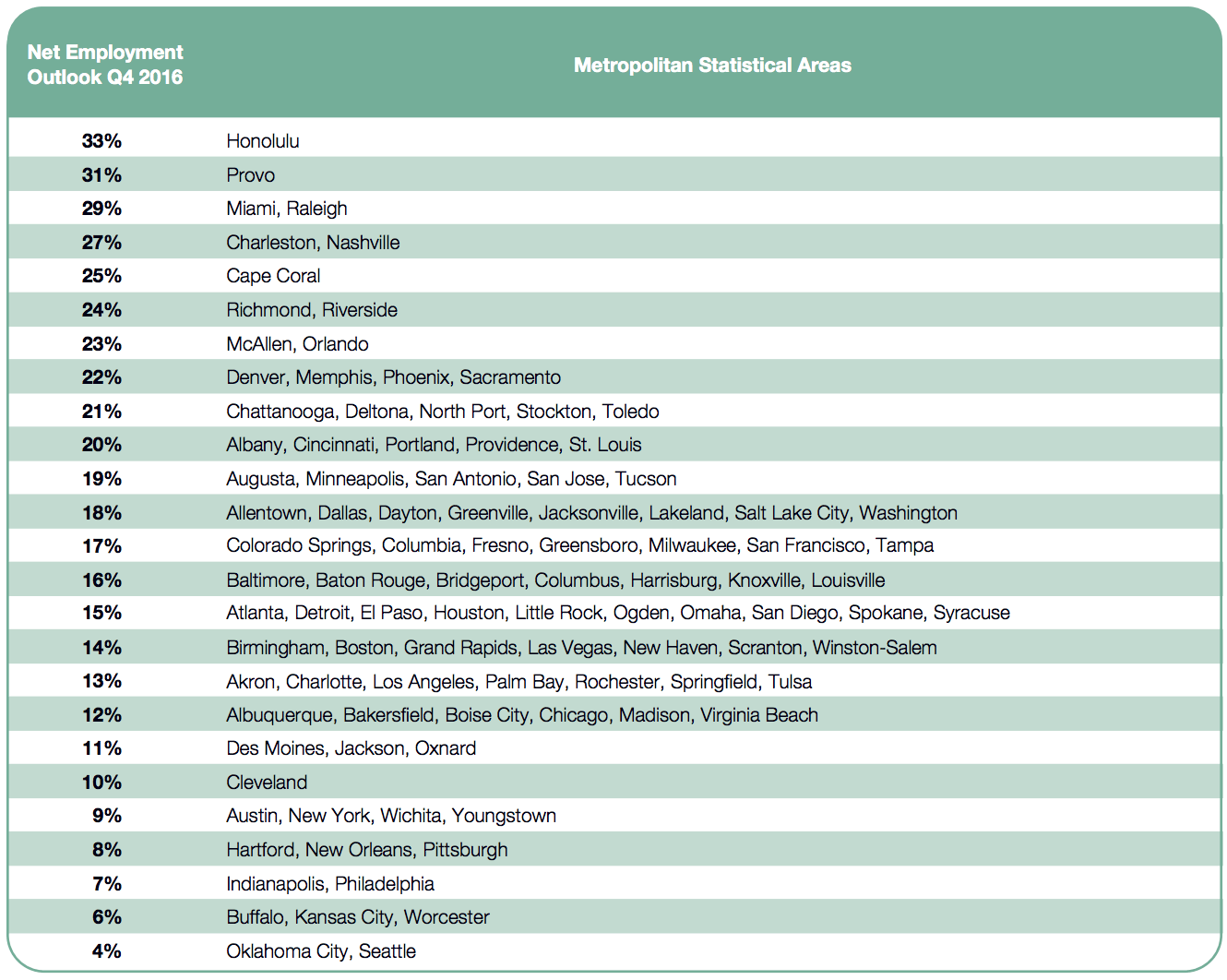 Employers added 151,000 jobs last month as the U.S. unemployment rate remained unchanged at 4.9 percent. Employment in food services continued to trend up during the month (+34.000). Over the year, the industry has added 312,000. The social assistance sector added 22,000 jobs over the month, with most of the growth in individual and family services (+17,000). Financial activities employment continued on an upward trend in August (+15,000), with a gain in securities, commodity contracts, and alternative investments (+6,000). Over the year, financial activities has added 167,000 jobs. And healthcare employment continued to trend up during the month (+14,000). In August, hospitals added 11,000 jobs, and employment in ambulatory healthcare services trended up (+13,000).

ManpowerGroup interviewed nearly 59,000 employers across 43 countries and territories to forecast labor market activity in the fourth quarter. All participants were asked, “How do you anticipate total employment at your location to change in the three months to the end of December 2016 as compared to the current quarter?”

Staffing levels are expected to grow by varying degrees in 42 of 43 countries and territories through the end of the year. Only employers in Brazil expect payrolls to decline in the October to December time frame. Uncertainty associated with the slowdown of the global economy, the Brexit referendum and continued financial market volatility appears to have had little impact on employer hiring confidence.

Slightly more than half of the forecasts strengthen by varying margins when compared to results reported three months ago, with hiring plans improving in 23 of 43 countries and territories, remaining unchanged in nine, and declining in 11. Outlooks improve in 21 countries and territories when compared with Q4 of 2015, are unchanged in six, and decline in 15.

Hiring confidence is strongest in India, Japan, Taiwan and the U.S., while employers in Brazil, Belgium, Finland, Italy and Switzerland report the weakest hiring plans.

In the Americas region, fourth quarter workforce gains are expected in nine of 10 countries. However, employer confidence is mixed when compared to prior reports with forecasts improving by varying margins in five countries in comparison to the July to September period, declining in three and remaining unchanged in two. When compared to Q4 of 2015, forecasts weaken in five countries, strengthen in two, and are unchanged in three. Employers in the U.S., Colombia and Mexico report the region’s most optimistic fourth quarter hiring plans, while opportunities for job seekers are expected to be weakest in Brazil.

Employers in all 25 countries in the Europe, Middle East & Africa (EMEA) region expect some level of staffing level growth over the next three months. In a quarter-over-quarter comparison, forecasts improve in 12 countries, weaken in six and are unchanged in seven. When compared year-over-year, job prospects are expected to improve in 16 countries, decline in six and remain unchanged in two. Employers in Ireland and Israel report the region’s strongest fourth quarter hiring plans, while the weakest are reported in Belgium, Finland, Italy and Switzerland.

However, fourth quarter forecasts weaken in four countries and territories when compared year-over-year, improve in three and are unchanged in one. For the fifth consecutive quarter, employers in India report the most optimistic regional and global hiring plans. China’s forecast improves slightly from three months ago, but employers here again report the region’s weakest fourth quarter hiring plans.