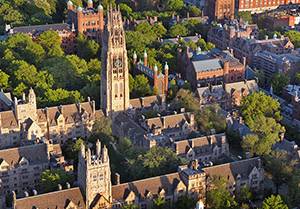 November 27, 2017 – Executive search firm Witt/Kieffer has been retained by Yale University to lead its search for a new director of athletics. Thomas Beckett, who has served in the role for 24 years, is retiring next June. Greg Santore, principal and practice leader of Witt/Kieffer’s sports leadership practice, is leading the search along with senior associate Katy Young.

The incoming leader will oversee a staff of more than 200, a department budget of $51 million and facilities that include 22 separate venues, including a golf course and an outdoor recreation center. The new AD will manage a wide array of recreation and wellness initiatives and an active community outreach program, according to Witt/Kieffer. The new director is charged with maintaining strong relationships with a variety of important stakeholders, including students, staff, faculty and alumni.

The successful candidate must have unquestioned integrity and excellent management skills, said the search firm. Yale is seeking an individual who is visionary, strategic, collaborative, resourceful and innovative. He or she should be responsive to the opportunities and challenges of leading the program into the next generation in the highly complex and competitive environment of an NCAA Division I (FCS) athletics program within the Ivy Group, said the recruitment firm.

Founded in 1701, Yale is the third oldest institution of education in the U.S. Boasting 33 varsity sports and over 900 student athletes, Yale has averaged more than 10 nationally ranked teams each year and has won national championships in men’s hockey, men’s and women’s squash, sailing and rowing.

Mr. Santore has recruited CEOs, presidents and other senior executives for organizations in healthcare, higher education and the not-for-profit sector. As head of the firm’s sports leadership practice, he also specializes in recruiting college athletic directors and CEOs for major sports foundations, associations and charities. He is currently leading AD searches for West Chester University of Pennsylvania and Muskingum University.

Ms. Young has supported over 40 searches for Division I head coaches and athletic directors. She has also worked with clients across professional sports (including NBA, MLB, and NHL teams) as well as major events and venues.

Parker Executive Search has been selected by Northeastern University in Boston to find new athletic director. Peter Roby will retire in June, concluding more than 15 years with the university. Daniel Parker, vice president and managing director, is leading the search along with associate Hayden Garrett. Athletic directors are playing an increasingly vital role across the country.

Sports and entertainment recruitment firm Turnkey Search placed Bill Moos as athletic director at the University of Nebraska. The chancellor said Mr. Moos rose to the top of a group of candidates that included several sitting athletic directors from Power 5 conference schools.

Collegiate Sports Associates retained by University of Texas at San Antonio (UTSA) to lead search for a new athletic director. UTSA president Taylor Eighmy said that the group’s goal should be “to identify an exceptional leader who is committed to the university’s advancement to excellence in academics, research, engagement and athletics.”

TurnkeyZRG Recruits Commissioner for the Big 12