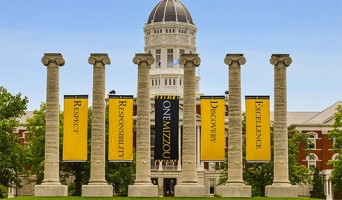 March 3, 2016 – Atlanta-based executive recruiters College Sports Solutions (CSS) has recruited Barry Odom to the new head football coach post at the University of Missouri (MU). The search began just over three months ago, two days after Gary Pinkel announced that he would step down as coach after the season ended. The team had gone 5-7 after winning consecutive SEC East titles.

Mr. Odom, who was previously the team’s defensive coordinator for the past four years, inked a five-year deal that makes him the 32nd head coach in MU history. A longtime fixture at Mizzou, he takes over a program he has been immersed in at every level for some 14 years – including six in an administrative capacity (2003-08), four as a coach (2009-11, 2015) and four as a successful student-athlete (1996-99).

“We met with a number of highly-qualified candidates from across the country in a very short period of time and CSS proved to be very helpful in coordinating travel and logistics for all parties in an efficient and discreet manner,” said Ryan Bradley, MU’s senior associate AD of strategic communications. “We are thrilled to have identified Barry Odom as the new leader of Mizzou football and appreciate CSS for their assistance throughout the search process.”

Athletic director Mack Rhoades said he was “extremely excited” to welcome Mr. Odom. “We had the opportunity to visit with a number of excellent coaches throughout our search. At the conclusion of that process, Barry was the clear choice to serve as our next coach. He is a man of high integrity and possesses all the qualities you look for in a successful head coach. He has an undeniable passion for Mizzou, a strong track-record of success at each level of his career and a clear vision to mentor our student-athletes and lead our program to even greater heights.”

MU has a history of turning to executive search firms to fill important positions within the school’s athletic department. In 2014, it used North Carolina-based Collegiate Sports Associates to land its basketball head coach which resulted in Central Missouri’s Kim Anderson taking the job. Last year, MU also tapped Korn Ferry to assist it with the search for a new athletics director; that assignment put Mr. Rhoades into his current AD post.

As the largest university in Missouri, MU enrolls 35,000 students and offers over 300 degree programs in 19 academic colleges. It is the flagship campus of the University of Missouri System, which also maintains campuses in Rolla, Kansas City, and St. Louis.

College Sports Solutions provides consulting and recruiting services to universities, intercollegiate conferences and collegiate organizations. Jeff Schemmel serves as the founder and president of the firm.

Check Out These Related Articles On College Sports Recruiting: