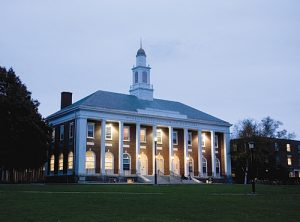 June 21, 2016 – Executive search firm DHR International has recruited an insider, Jeffrey Schulman, as athletic director at the University of Vermont (UVM). He succeeds Dr. Robert Corran, who will complete his 13th year of service in the position upon his official retirement at the end of June. The search was led by DHR managing partner and global sports practice leader Glenn Sugiyama.

Mr. Schulman, who has worked at UVM for over two decades, beat out seven other semifinalists. In his new role, he will have primary responsibility for the department’s financial operations, including budget development as well as coordination and oversight of all capital projects. He will also assist in the department’s development efforts and will supervise the field hockey and women’s hockey programs.

“Jeff’s strong commitment to honesty and integrity, his extensive experience in Division I athletics, and his love for our university make him the right choice,” said Tom Sullivan, UVM president. Going forward, the athletic director will report directly to Mr. Sullivan, emphasizing the importance of the sports post to UVM.

DHR is said to have been paid $75,000 to look for, vet and present candidates to UVM, along with another $9,000 for indirect costs and reimbursements of over $30,000 for advertising placements and traveling.

UVM has used Boston-based search firm Issacson, Miller for searches in the past, but the firm doesn’t generally handle assignments for school’s athletic departments.

Founded in 1791, UVM is among the oldest universities in the U.S. and the fifth institution of higher education established in New England after Harvard, Yale, Dartmouth, and Brown. It enrolls nearly 13,000 students and comprises seven undergraduate schools, an honors college, a graduate college, and a college of medicine.

DHR’s sports practice is a global specialty for the firm with capabilities that serve clients in six continents across all sports-related organizations, ranging from Fortune 500 companies and professional sports teams to public and private universities athletics squads. The firm has handled a number of athletic director searches, including Scott Barnes for the University of Pittsburgh; Joe Parker for Colorado State University; Jim Bartko for Fresno State University; and Greg Amodio for Quinnipiac University.

DHR was recently selected by Purdue University to lead the search for its next AD. Current Purdue athletic director Morgan Burke announced he would retire in July 2017 after serving in his position nearly 26 years. Mr. Sugiyama is also leading that search assignment.

UVM is one of an expanding number of schools turning to an executive search firms to find new athletics directors: