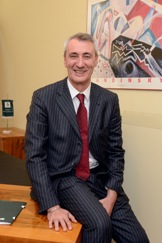 Piero joined Horton International Italy in 2009 as Managing Partner, and is based in Milan. Prior to this, Piero co-founded Elan International (part of the Inac International network). He specialised in industrial sectors (particularly automotive, home appliances and mass market) and established solid partnership with several key organisations. In 2000, Piero joined Cosm Consulting, with a brief to develop the company within the industrial, mass market and general services sectors. His career began as Head of Personnel in 1986, with Ceat Cavi. In 1997 he was appointed Human Resources Director for an American company that produced cables and systems, and was based in Turin, Milan and UK. Piero has had considerable experience within a multinational environment, in the fields of industrial relations, recruiting and selection, organisation, human resources management, training and development, logistics and cost accounting.