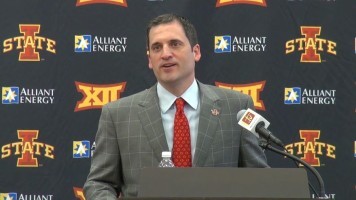 June 10, 2015 – Parker Executive Search has placed Murray State coach Steve Prohm as head basketball coach for Iowa State University. He replaces Fred Hoiberg, who recently accepted the position of head coach for the Chicago Bulls. Mr. Prohm has four years of head coaching experience, all of which came at Murray State. In those four years, he was 104-29 and 54-10 in Ohio Valley play. Murray State, the two-time defending Big 12 tournament champion, has a reputation for being one of the best mid-major jobs in the country. It is projected to be a top-10 team and a challenger to Kansas next season in the conference.

Phoenix Suns coach Jeff Hornacek, Stephen F. Austin’s Brad Underwood, Valporaiso’s Bryce Drew, and Cyclone assistant T.J. Otzelberger were rumored to be among the potential candidates who were looked at for the Iowa State coaching position.

“We feel Steve and his family are a perfect fit for Iowa State University,” said Iowa State athletic director Jamie Pollard. “Steve’s personal values, style of play and proven success as a head coach make him an outstanding choice to be our next coach. He is a proven winner who is widely respected by his current and former players.”

Searching for collegiate athletics directors, coaches and sports teams leaders has become big business for executive recruiters. Besides Atlanta-based Parker, which conducts searches for colleges and universities, collegiate athletics, and corporations, a number of rivals specializing in the sector can be found around the country, including Alden & Associates of Florence, MA, Collegiate Sports Associates, and Sports Group International, both based in North Carolina. All of the major search firms also have sports practices devoted to finding leaders for the sector.

“The sports management field has changed drastically in the last decade,” said Ms. Alden of Alden & Associates. “With the advent of bachelors, masters, and doctoral degrees in sports management, more people have become involved in athletic administration. And the work itself has become more complex.” Fundraising expertise, for example, and media / crisis management skills have become just as important as specific sports field knowledge.

Hunt Scanlon Media, which has tracked sports leadership searches for more than two decades, has seen pay packages in the field rise stratospherically — and with it has come a need for discretion, confidentiality, and a high degree of professionalism in how sports leaders are groomed and recruited.

“There’s more at stake today,” said Hunt Scanlon president Christopher W. Hunt. “And clearly with the larger colleges, sports is big business. As a result, there’s more on the line. And when there’s more on the line, it is imperative that the right talent is selected.” Mr. Hunt said he’s also noticed a developing trend: search firms are being called in more frequently for their talent assessment advisory services as the hunt to find sports leaders intensifies.