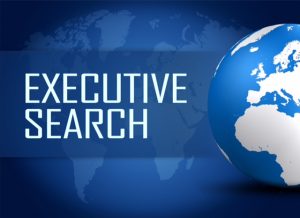 July 21, 2016 – Using a search firm to recruit a new president or provost today can cost colleges nearly $100,000 or more in recruiting fees. So, is it worth bringing in outside agencies to help?

Research compiled by James Finkelstein, a public policy professor at George Mason University, estimates that fees called for under executive search firm contracts with public colleges and universities for the 2015 / 2016 academic year averaged $78,769. These costs varied from a low of $25,000 to a high of $160,000. With additional associated costs thrown in, average search firm fees jumped to $87,186 per assignment.

Executive search firms are being used more frequently by universities, Mr. Finkelstein’s research shows. And a look into reporting activity at Hunt Scanlon Media bears this out: At a time of the year when many colleges and universities are ramping up efforts to fill their C-suites, a large number have, in fact, turned to executive search firms rather than hunt for the talent themselves.

“There is an increasing reliance on executive search firms to assist colleges and universities in filling key positions,” said Mr. Finkelstein. But, by doing so, he said, governing boards and university administrators are outsourcing key aspects of one of their most important responsibilities— hiring institutional leaders — to for-profit companies. Of 106 recent top job postings seeking higher education leaders for the 2015 / 2016 academic year, said Mr. Finklestein, a breathtaking 82, or roughly three out of every four, went to search firms.

“It is no wonder that universities and institutions of higher learning are turning to executive search firms in droves to fill their top roles,” said Diversified Search CEO Dale Jones. At a time with many academic leaders are retiring or leaving their posts to pursue other interests, he said, competition to replace them is intense.

“Recruiters have the requisite skills to manage a process that at times can be unwieldy, but more importantly they can help to expand a university’s reach and use their well-honed assessment skills to find the very best leaders in and out of higher education,” said Mr. Jones. Diversified Search has, to date, worked with more than 400 educational institutions across the nation finding leaders for every conceivable academic size and setting.

What About the Cost?

But as Mr. Finklestein’s research suggests, these searches can get expensive. “We estimate that over a 10-year period public universities in Ohio spent $25 million on search firm fees,” he said, adding: “There is no evidence of which we are aware to support the claims that using a search firm results in a better pool of candidates or the hiring of more effective leaders,” he added.

Mr. Jones, the search firm head, takes issue with that. “Our practice has consistently enhanced candidate pools, bringing individuals to the search who otherwise might not have entertained a new opportunity,” he said. “We have done this while facilitating the search process itself,” he added, “allowing search committee members to devote their time to critical evaluations and decisions, rather than paperwork and logistics.” Diversified Search just wrapped up a major search for Texas Southern University, placing Dr. Austin A. Lane as its 12th president. Managing directors Dr. Charles Taylor and Euris Belle led the search. The firm also placed Dr. Mike Hardin recently as provost of Samford University. That search was led by managing director Gene Head. 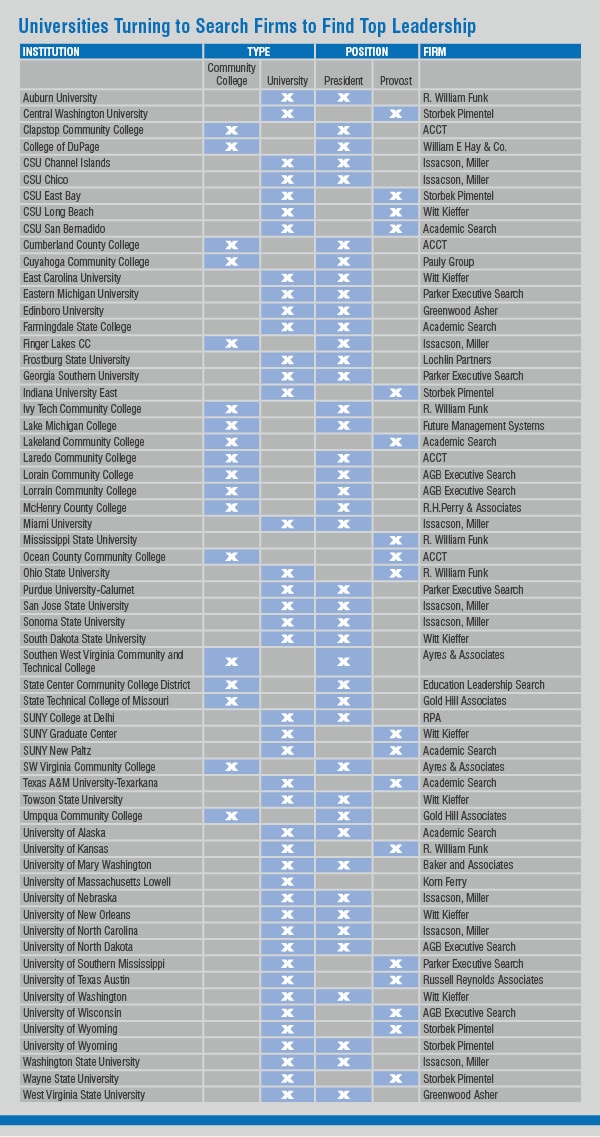 Most contracts called for calculating fees based on a fixed price model or a percentage model. The fixed price model was used in 52 percent of searches, while a percentage of a leader’s base salary was used in calculations in 25 percent of searches. This methodology seems to correlate with cost modeling research conducted this spring by Hunt Scanlon, which showed that fixed fees have supplanted percentage based fees for searches in general management positions at for-profit organizations. The percentage of base salary used to calculate fees varied, according to Hunt Scanlon, but ranged from as low as 18 percent to as high as 33 percent. In Mr. Finklestein’s university research, 22 percent of searches that charged on a percentage model included bonuses in their calculations.

According to Mr. Jones, looking at administrative-type fees is, essentially, looking in the wrong direction. “We provide a highly inclusive process to allow the voices of all stakeholders to be heard as well as a strategic and disciplined partnership with the search committee,” he said. He noted that his firm’s process includes thorough market research and outreach, in-depth interviews, assessment and cultural fit reviews, as well as on-boarding services. “We also know that respect for due process and equal treatment is critical, as is a focus on diversity. Our practice has developed flexible search models that have allowed us to work successfully with all types of institutions,” he added.

“The market for executive search in universities and colleges has expanded dramatically over the last 25 years,” said Vivian Brocard, president of Isaacson, Miller, one of the leading recruiting specialists serving the needs of higher education institutional leadership. A nationally recognized search firm focused on finding transformative leaders for mission-driven organizations, Isaacson, Miller has conducted some 5,600 placements over 34 years. Of those, some 2,800, or half, have been in the education sector. It expects overall demand for its talent acquisition services to continue to increase as baby boomers retire and there remains continued flux within the higher education sector.

The market expansion is a direct result of increased pressure on the economic model in higher education, said Ms. Brocard. “That pressure comes not only from competition, but also from reduced state funding, rising pressures on tuition, escalating student debt, and decreasing federal research funding.” All this, while the importance of leadership escalates steadily. “As a result,” said Ms. Brocard, “universities use every method available to reduce the risk of failure and increase the likelihood of success; hence, the dramatic rise in the use of search.”