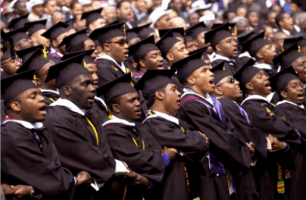 The team of founding principals will leverage their combined leadership experience to recruit and support college presidents, chancellors, provosts, deans, and board members.

In addition to its founding principals, Christopher Braswell will serve as the firm’s president. Mr. Braswell has over 20 years’ experience partnering with organizations in talent management, executive search, and leadership development. Previously, he was a founding partner of Talent Bridge, where he managed the the firm’s search practice, career services division, and diversity talent practice.

These issues compound the challenges for leaders, and have contributed to “fairly significant turnover of leadership” in the black-college community, said Mr. Garland. “We are experiencing a critical moment in the black college community and our new firm was created to ensure that all schools have access to superior executive level talent.”

Mr. Braswell said his search firm is dedicated “to building the capacity of our black college community” by helping to identify and build the next generation of leaders. “Like most higher education institutions, our colleges and universities are facing critical times; however, our schools have a unique history and mission that makes the challenges even more acute.”

He said enrollment difficulties, funding disparities, budget shortfalls and enrollment declines have forced black college leadership to make harder and more strategic choices about their academic program offerings “and how best to serve the students and their academic future.”

The firm will also offer guidance and act as a sounding board for up to a year for the new leaders TM2  places. “We understand how lonely these jobs can be,” said Mr. Garland. “And we also understand how important it is to have someone who you can call on for advice.”

“Completing a successful search is only part of the job,” said Mr.  Braswell. “We intend to maintain long term relationships with leaders and schools, providing the coaching necessary for successful transitions.”

TM2 plans to work with boards of trustees to help them understand what they should be looking for in candidates, and to set realistic expectations for new leaders.

An important element for black colleges and organizations of any kind is emphasizing cultural fit. Organizational culture has reached a tipping point, said Senn Delaney founder and chairman Larry Senn, a pioneer in the field of corporate culture who has led culture shaping engagements for deans of business schools and presidents of major universities in a career spanning more than 37 years. Senn Delaney is the culture shaping leader acquired by Heidrick & Struggles three years ago.

“Historically black schools not only have a different culture than majority-serving institutions do, but they might also differ in how they view prospective leaders,” said Ms. Cowser Yancy. “We might look at the preparation level differently and look at the skill set differently.”

While a growing number of recruiting firm offer executive search services to colleges, she said, “they are rarely deeply engaged with the black college community,” said Ms. Cowser Yancy. “You don’t see a lot of diversity in terms of the principals and the folks involved in the searches,” she added.

Mr. Braswell said TM2 will use its combined experiences in higher education with both black colleges and majority institutions to partner with schools “to build highly effective and functioning leadership” through increasing the quality of talent acquisition and developing strategic leaders, he said.

TM2 had initial financial support from, and shares office space with, the Thurgood Marshall College Fund in Washington, D.C.

Check Out These Related Articles On C-Level Searches for Higher Educational Institutions: