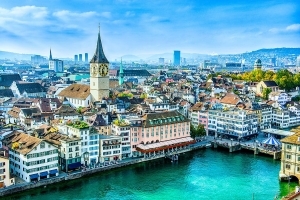 February 13, 2018 – Executive search firm Pedersen & Partners has opened an office in Zürich and named Thomas Heeger as the country manager for Switzerland.

Switzerland has a stable, prosperous and high-tech economy and in multiple rankings is listed as the wealthiest country in the world per capita. It is home to several large multinational corporations. The largest Swiss companies by revenue are Glencore, Gunvor, Nestlé, Novartis, Hoffmann-La Roche, ABB, Mercuria Energy Group and Adecco. Switzerland’s most important economic sector is manufacturing, which consists largely of the production of specialist chemicals, health and pharmaceutical goods, scientific and precision measuring instruments and musical instruments.

Mr. Heeger has been working in executive search since 2009. He was previously the managing partner for Switzerland for boutique firm DELTACON Executive Search &.Recruiting, where he focused on the life sciences sector. Mr. Heeger has conducted searches within the pharma, biotech, medtech, diagnostics and IT industries. Prior to starting his executive search career, he was VP of finance and strategic operations, Europe, at Novo Nordisk. He designed and implemented a broad financial strategy across that company, while also exploring new areas of growth and improvement for each of the divisions.

“I am excited to join Pedersen & Partners – a value driven and dynamic executive search firm that gives priority to its clients,” said Mr. Heeger. “In Switzerland, we will be a trusted advisor to our clients as they strengthen their management teams locally or internationally.”

Pedersen & Partners operates 56 wholly-owned offices in 52 countries across Europe, the Middle East, Africa, Asia and the Americas. Mr. Pedersen has conducted executive search assignments since 1995 and has completed over 700 searches.

Over the past year, Pedersen & Partners has expanded its footprint in various parts of the globe:

Just recently, it named Mark Paviour as its country manager for the U.K. He joined Pedersen & Partners from Egon Zehnder, where he worked for 24 years in the U.K. and the Middle East. During his tenure there, he served on the global financial services practice group leadership team, ran the asset/wealth management and sovereign wealth fund practices and participated in the …

In November, it expanded with the addition of Simon Mansfield to its London team as a client partner within its industrial practice and global head of its defense search practice. Mr. Mansfield has decades of in-depth expertise in the developing and emerging markets, recruiting board members for global firms.

In September, the firm appointed Keith Labbett as a client partner in Canada. Over the course of two decades, Mr. Labbett has placed hundreds of executive leaders and built teams across all management functions, focusing on upper management to C-level positions. Previously, Mr. Labbett spent two years as partner with DHR International in Toronto.