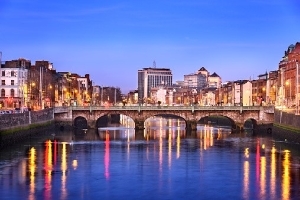 December 12, 2017 – Executive search firm Odgers Berndtson has continued its growth and expansion plans with the opening a new office in Dublin. The move will enhance the firm’s capacity to support global companies looking to establish new centers of operation in Europe in readiness for Brexit, according to Odgers.

The new location will be led by Damian Ringwood, who becomes managing partner, Odgers Berndtson Dublin. This extends the firm’s global reach across 58 offices in 29 countries.

The move comes as increasing numbers of organizations look to invest in Ireland prior to Brexit. They include JP Morgan, Bank of America, Citibank, Standard Life and Barclays in financial services and Google and LinkedIn in the tech sector.

“The growth of our business depends on being able to provide a high level of support to major global clients as they address some very significant challenges posed by Brexit,” said Kester Scrope, CEO of Odgers Berndtson. “We are delighted to welcome Damian and his team to our firm, who bring over six decades of experience and specialize in key sectors like financial services, consumer, public sector, professional services, tech and media.”

Mr. Ringwood, who will also now lead the financial services practice, also has extensive experience across other sectors such as professional services, healthcare and industrial. He previously held senior strategy consulting positions with EY London (director), Prospectus Strategy Consultants (director) and BearingPoint (managing director). He began his career with the Smurfit Kappa Group.

Executive Search Fallout from Brexit Could Run Wide and Deep
There’s a crisis slowly unfolding at executive search firms across London – especially for those with exposure to the financial services markets. But the reverberations in the world’s 2nd largest search market are also being felt as far away as Chicago and L.A., home to the sector’s two publicly held talent giants.

Ireland has a modern knowledge economy, focusing on services and high-tech industries and dependent on trade, industry and investment. The country’s famous drinks industry employs approximately 92,000 people and contributes billions annually to the Irish economy, making it one of its biggest sectors. It supports jobs in agriculture, distilling and brewing. But a growing financial services sector base is also important, employing some 35,000 people and contributing billions in taxes annually to the Irish economy. Ireland is, in fact, the seventh largest provider of wholesale financial services in Europe.

Odgers Berndtson has seen a wave of growth this year. Recently, the firm added Susannah Crabtree as partner and head of its Ottawa office. She specializes in the recruitment of senior executives in the Ottawa market, with a focus on the public and not-for-profit sectors. She is also a key member of Odgers Berndtson’s leadership practice, helping clients assess and develop their leadership teams, succession plans and high-potential talent. Ms. Crabtree previously served as Ottawa office leader for Mercer Canada.

In April, Odgers Berndtson added Lisa DeConto, Jane Swan and Brad Pierce. Ms. DeConto joined the firm as a partner and serves clients in the financial services sector. She had been a senior member of the asset and wealth management practice at Russell Reynolds Associates. Ms. Swan became a partner and head of Odgers Berndtson’s U.S. wealth management practice. Before joining the firm, she headed the wealth management practices at Sheffield Haworth, Korn Ferry and Heidrick & Struggles. Mr. Pierce was named a partner and serves clients in the international consulting and professional services sector, where he has 17-plus years experience. He previously founded a boutique search firm, in addition to earlier roles with Korn Ferry, Russell Reynolds Associates and Heidrick & Struggles.

Check Out These Related Articles On Search Firms In Ireland: