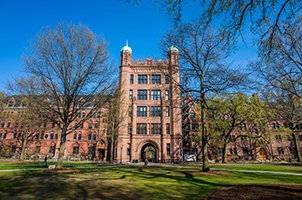 February 2, 2018 – Executive search firm Witt/Kieffer has placed Victoria M. Chun as the new director of athletics of Yale University. Thomas Beckett, who has served in the role for 24 years, is retiring in June. Greg Santore, principal and practice leader of Witt/Kieffer’s sports leadership practice, led the search along with senior associate Katy Young.

In her new role, Ms. Chun will oversee a staff of more than 200, a department budget of $51 million and facilities that include 22 separate venues, including a golf course and an outdoor recreation center. She will join Yale on July 1.

“Yale’s approach to athletics, in keeping with the tradition of the Ivy League, prizes the development of the ‘student-athlete,’” said Peter Salovey, president of Yale. “Vicky believes, as do I, that a strong athletics program can help us fulfill Yale’s mission to educate aspiring leaders worldwide who serve all sectors of society. Vicky is a respected leader and a national advocate for excellence. She has an extraordinary ability to create a culture of enthusiasm and pride within an athletics program, and she brings many gifts to Yale.”

Robin Harris, executive director of the Ivy League describes Ms. Chun as an outstanding individual whose background and experience are well suited to the AD job at Yale. “As a former student-athlete and coach, Vicky champions an exemplary focus on the overall student-athlete experience,” said Ms. Harris. “She understands the importance of fostering successful athletics programs within the context of rigorous academics and preparing student-athletes for lifelong success in their chosen professions.”

Recognized by Street & Smith’s Sports Business Journal as a “Game Changer,” Ms. Chun has earned a stellar reputation as one of the most innovative and well-respected leaders in NCAA Division I athletics. She has served as vice president and director of athletics at Colgate University for the past six years.

At the national level, Ms. Chun has been an advocate for excellence in intercollegiate sports. One of only 40 members of the NCAA Division I Council, she also serves as vice chair of the NCAA Division I Football Oversight Committee and on the newly created Division I Football Competition Committee. She recently served as president of the Women Leaders in College Sports and as a member of the Harvard University visiting committee Board of Overseers. The first female Asian-American athletic director in NCAA Division I history, Ms. Chun will be the first woman and the first Asian American to serve as director of athletics at Yale.

Founded in 1701, Yale is the third oldest institution of education in the U.S. Boasting 33 varsity sports and over 900 student athletes, Yale has averaged more than 10 nationally ranked teams each year and has won national championships in men’s hockey, men’s and women’s squash, sailing and rowing.

Mr. Santore has recruited CEOs, presidents and other senior executives for organizations in healthcare, higher education and the not-for-profit sector. As head of the firm’s sports leadership practice, he also specializes in recruiting college athletic directors and CEOs for major sports foundations, associations and charities. He is currently leading AD searches for West Chester University of Pennsylvania and Muskingum University.

Ms. Young has supported over 40 searches for Division I head coaches and athletic directors. She has also worked with clients across professional sports (including NBA, MLB, and NHL teams) as well as major events and venues.

Sports and entertainment recruitment firm Turnkey Search placed Bill Moos as athletic director at the University of Nebraska. The chancellor said Mr. Moos rose to the top of a group of candidates that included several sitting athletic directors from Power 5 conference schools.

DHR International placed Heather Lyke as athletic director at the University of Pittsburgh. Glenn Sugiyama, DHR’s managing partner and global sports practice leader, led the assignment along with partner Pat Richter. DHR also recruited an insider, Jeffrey Schulman, as athletic director at the University of Vermont (UVM).  She becomes the first woman to take on this leadership role at the school, replacing Scott Barnes.