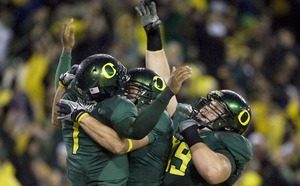 The Ducks fired Mark Helfrich after four seasons at which time the search was commenced. Oregon finished the season 4-8, the first time it has finished a season with a losing record and without a bowl appearance since 2004. The move comes just two years after Mr. Helfrich got the Ducks within a victory of the program’s first national championship.

Laurie Wilder, the search firm’s president, said she targeted “high-profile” candidates. The school asked the firm to look at a broad, diverse pool of potential leaders that would embrace the student-athlete experience and understand the expectations at the university.

Mr. Taggart coached South Florida to a school record 10-2 regular season mark this fall, three years after the Bulls went 2-10. He will be the 33rd head coach in Oregon football history, and will have the distinction of being the football program’s first African American head coach.

He began his coaching career as an assistant with Western Kentucky 1999-2006. He then spent three seasons as an assistant to Jim Harbaugh at Stanford from 2007-09, coaching running backs and helping Toby Gerhart win the 2009 Doak Walker Award. Mr. Taggart returned to Western Kentucky as head coach in 2010, taking over a program that had lost 20 straight games and leading the team to their first bowl bid in 2012.

“Willie places an emphasis on ensuring a positive student-athlete experience and on winning, and his previous stops have proven his success at both,” said Mr. Mullens. “We have a very bright future under his leadership.”

“I want to congratulate Willie on becoming the University of Oregon’s next head football coach, and welcome him and his family to the flock,” UO president and professor of law Michael H. Schill said. “I am confident that Coach Taggart fits with the UO’s values and culture of excellence as it relates to supporting our student-athletes’ personal growth and success both on and off the playing field.”

“I am grateful for the trust that president Michael Schill and Rob Mullens have put in me to be the next head coach of the Oregon football program, and I thank them for the opportunity,” Mr. Taggart said. “Oregon has a strong national presence and a proud recent history of playing among the nation’s elite, and I look forward to the challenge of upholding the excellence. I can’t wait to get started.”

The firm recently recruited David Benedict as athletic director at the University of Connecticut. It also placed Mark Jackson as director of athletics at Villanova University as well as Jennifer Cohen as the new AD of the University of Washington (UW). A UW spokesperson said the school paid the search firm $105,000 for its role in generating leading candidates and seeing the search process through to completion.

As the college football season comes to an end for teams not competing in the post season, expect to see a lot of firing and hiring activity among coaches. And schools are expected to continue to turn search firms to fill the resulting vacancies.

The University of Delaware retained Korn Ferry recently to lead its search for a new head coach for its football team. The search is being led by Jed Hughes, vice chairman of Korn Ferry’s sports recruiting practice. Dave Brock, who coached Delaware to a 19-22 record, was fired earlier in October. Mr. Hughes’ highest profile placements include New York Jets GM John Idzik; Mark Murphy, CEO of the Green Bay Packers; Larry Scott, commissioner of the Pac-12; Bob Bowlsby, commissioner of the Big 12; and Dave Brandon and Jim Harbaugh, the athletic director and the head football coach of the Michigan Wolverines, respectively.