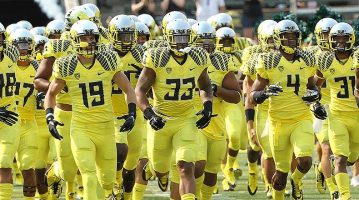 December 5, 2016 – The University of Oregon has retained Atlanta-based Parker Executive Search to lead its search for a new head football coach.

The Ducks fired Mark Helfrich after four seasons and the search for his replacement now begins. Oregon finished the season 4-8, the first time it has finished a season with a losing record and without a bowl appearance since 2004. The move comes just two years after Mr. Helfrich got the Ducks within a victory of the program’s first national championship.

Athletic director Rob Mullens must interview at least one minority candidate to comply with state law. In 2009, Oregon became the first state to adopt a law — similar to the NFL’s “Rooney Rule” — that requires all public universities to interview a minority candidate for every open head coaching job. Laurie Wilder, the search firm’s president, said she will be targeting “high-profile” candidates.

“This is a highly desirable job,” said Mr. Mullens. “So [we will look at] a broad, diverse pool of candidates. We want somebody who embraces the student-athlete experience, who understands the high expectations at the University of Oregon, who understands our community and really, really wants to be here.”

The firm recently recruited David Benedict as athletic director at the Universtiy of Connecticut. It also placed Mark Jackson as director of athletics at Villanova University as well as Jennifer Cohen as the new AD of the University of Washington (UW). A UW spokesperson said the school paid the search firm $105,000 for its role in generating leading candidates and seeing the search process through to completion.

As the college football season comes to an end for teams not competing in the post season, expect to see a lot of firing and hiring activity among coaches. And schools are expected to continue to turnsearch firms to fill vacancies.

Executive search firm Eastman & Beaudine was recently selected by Baylor University to lead its search for a new head football coach. Coach Art Briles was fired by Baylor in May in the wake of a sexual assault scandal that also cost school president Ken Starr and athletic director Ian McCaw their jobs. Eastman & Beaudine has conducted numerous assignments to find head football or basketball coaches for a number of universities, including the University of Missouri, Arizona State, Clemson, the University of Mississippi, Texas Tech and other top college sports programs.

The University of Delaware retained Korn Ferry to lead its search for a new head football coach. The search is being led by Jed Hughes, vice chairman of Korn Ferry’s sports recruiting practice. Dave Brock, who coached Delaware to a 19-22 record, was fired earlier in October. Mr. Hughes’ highest profile placements include New York Jets GM John Idzik; Mark Murphy, CEO of the Green Bay Packers; Larry Scott, commissioner of the Pac-12; Bob Bowlsby, commissioner of the Big 12; and Dave Brandon and Jim Harbaugh, the athletic director and the head football coach of the Michigan Wolverines, respectively.