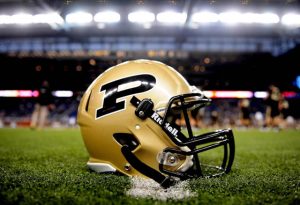 Mr. Brohm is a former NFL quarterback and coaching disciple of Bobby Petrino. He has been head coach at Western Kentucky since 2014, going 30-10 and 2-0 in bowl games. He is also coming off back-to-back Conference USA championships. In addition, he has coached in the Big Ten before, serving as quarterback coach at Illinois from 2010-11.

Purdue athletic director Mike Bobinski said he spent a week to 10 days “getting organized” and considering his own list of possible candidates. “You work down from a group and the funnel narrows until ultimately you find your person,” said Mr. Bobinski. “Jeff was someone who early on was high on our list. We didn’t get to see him until later on because he was playing and coaching, but he was someone I had interest in from the get-go. Once we saw him and once I did all this background and research on him, it was positive, positive, positive — no negatives were unturned at any point.”

“We were fortunate to meet with many talented coaches from around the country during our search, and Jeff’s name was one that rose to the top early in the process,” Mr. Bobinski added. “He is a coach who already has achieved tremendous success and, at the same time, has incredible upside. His reputation and record of accomplishment as an innovative offensive coach and developer of quarterbacks is second to none.”

DHR was responsible for placing Mr. Bobinski as Purdue’s AD in September. Mr. Sugiyama also led that search. Mr. Bobinski has worked as a collegiate athletics administrator for more than 30 years with successful stints as athletics director at Georgia Tech, Xavier and Akron.

The Purdue University Boilermakers football team traces its origin back to October 29, 1887. The team compete in the Big Ten Conference as a member of the West Division. It has participated in 17 bowl games throughout its history, compiling a 9–8 record.

DHR’s sports practice is a global specialty for the firm with capabilities that serve clients in six continents across all sports-related organizations, ranging from Fortune 500 companies and professional sports teams to public and private university athletics squads. The firm has handled a number searches for schools including the University of Pittsburgh, Colorado State University, Fresno State University, San Jose State, Kansas, Syracuse and Quinnipiac University.

As the college football season comes to an end for teams not competing in the post season, expect to see a lot of firing and hiring activity among coaches. And schools are expected to continue to turn search firms to fill the resulting vacancies.

Just a few days ago, the University of Oregon retained Atlanta-based Parker Executive Search to lead its search for a new head football coach. Parker’s sports practice has worked with a wide range of schools, including Notre Dame, Dartmouth, the University of Chicago, Villanova, Iowa State, Fordham, and the University of Central Florida, among others.

The University of Delaware retained Korn Ferry recently to lead its search for a new head coach for its football team. The search is being led by Jed Hughes, vice chairman of Korn Ferry’s sports recruiting practice. Dave Brock, who coached Delaware to a 19-22 record, was fired earlier in October. Mr. Hughes’ highest profile placements include New York Jets GM John Idzik; Mark Murphy, CEO of the Green Bay Packers; Larry Scott, commissioner of the Pac-12; Bob Bowlsby, commissioner of the Big 12; and Dave Brandon and Jim Harbaugh, the athletic director and the head football coach of the Michigan Wolverines, respectively.