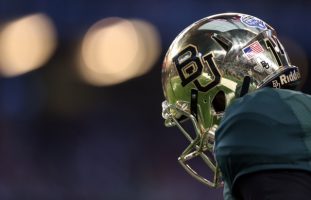 Coach Art Briles was fired by Baylor in May in the wake of a sexual assault scandal that also cost school president Ken Starr and athletic director Ian McCaw their jobs.

Mr. Rhule comes to Waco after four seasons as head coach at Temple University, where he led the Owls to consecutive 10-win seasons in 2015 and 2016 and the 2016 American Athletic Conference championship. It is the first time in Temple football history that it registered consecutive 10-win seasons and consecutive bowl game appearances. Prior to Temple, he served as an offensive line coach for the New York Giants in 2012, after coaching six years at Temple, first as the defensive line coach, before switching to quarterbacks and ultimately, to offensive coordinator in 2008. Prior to Temple, Mr. Rhule coached at Albright, Buffalo, UCLA and Western Carolina.

“We could not be more excited to welcome Matt, Julie and their children to the Baylor Family,” said Mack Rhoades, Baylor University vice president and director of intercollegiate athletics. “When we set out on our search for a new leader of our football program, we wanted a coach who shared our values, who had demonstrated success, who showed a true commitment to the overall student-athlete and who we believed could lead Baylor to a national championship. We found all of that and more in Matt and I know that he will be a perfect fit with the Baylor Family.”

“This is a great day for Baylor University and the beginning of a new chapter in our football program,” said interim president David Garland. “Matt is the absolute right man at the right time to lead us forward and I am confident that his values are our values and that his teams and student-athletes will make us all proud, on and off the field.”

“I am truly honored and humbled to join the Baylor Family,” said Mr. Rhule, “and I can’t thank president Garland and Mack Rhoades enough for this incredible opportunity. Baylor is a tremendous institution with a history of football success and I know the passion that so many have for the Bears will help bring the community together to reach even greater heights. I am excited to get started.”

Baylor University, known for rigorous academics and strong Christian values, is one of a small group of institutions in the country to receive an A for the strength of its core curriculum in a survey by the American Council of Trustees and Alumni. Undergraduates choose from 142 degree programs, including pre-health care, engineering, and business programs, while graduate students pursue options covering more than 75 master and 41 doctoral programs. Baylor is a founding member of the competitive Big 12 Conference and fields 19 varsity athletic teams.

Baylor recently hired Heidrick & Struggles to begin a national search effort to find the university’s 15th president. Thus far, he school’s presidential search committee has completed more than 80 hours of listening sessions – both on and off campus – with various groups of faculty, staff, students, alumni, friends and University administrators, who have provided their input regarding the professional and personal characteristics and experiences important to the university’s next president.

As the college football season comes to an end for teams not competing in the post season, expect to see a lot of firing and hiring activity among coaches. And schools are expected to continue to turn search firms to fill the resulting vacancies. Here is a look at a few assignments completed or underway from the Hunt Scanlon archives: