Menu
View our Events
Stay Connected:
Considerable increases in the chance of a promotion or raise bolster worker confidence index to highest level in five years. 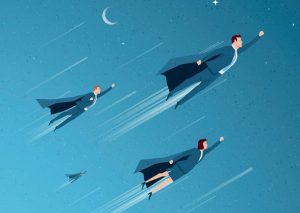 “It should be comforting for business leaders to see that their employees are feeling confident in the workplace,” said Andy Roane, vice president of recruitment process outsourcing for Yoh. “However, this sets up additional challenges for companies looking for talent during a time of relatively low unemployment. Happy, content workers are harder to recruit away from their current employer.”

“It’s critical that companies, regardless of their size or health of the business, make employee well-being a priority,” Mr. Roane said. “In order to retain and recruit the best employees in today’s competitive talent dynamic, they must take a proactive approach to crafting a work experience, start to finish, that’s tailored to the demands of today’s workers.” 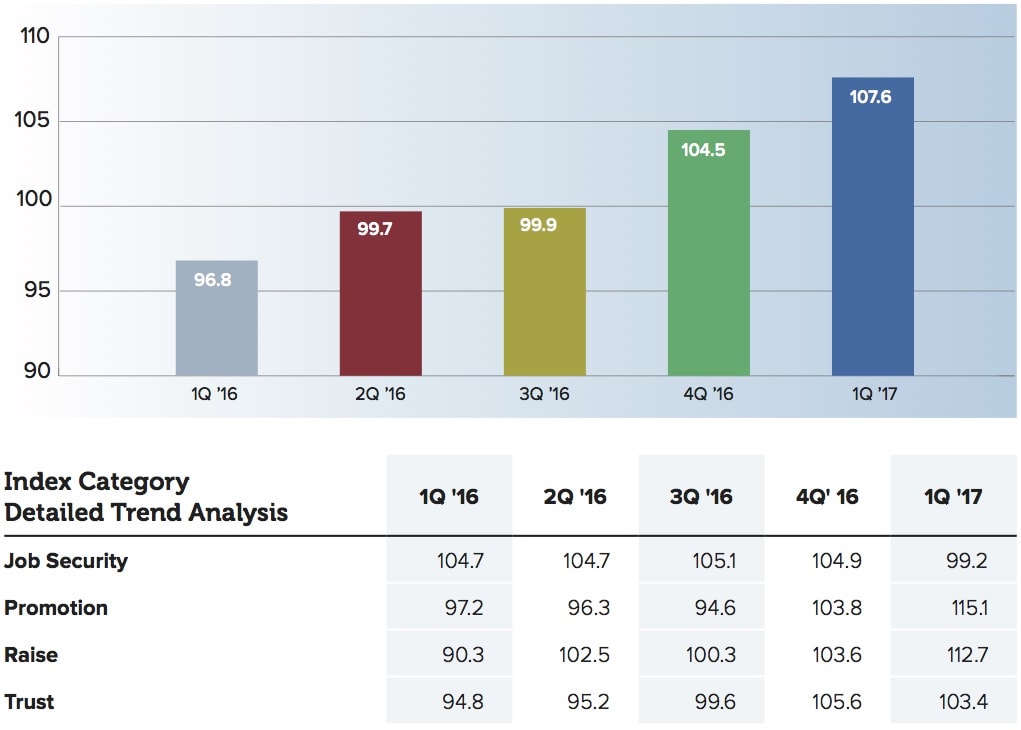 The report asked do you feel it likely that you will involuntarily lose your job or that your job will be eliminated in the next 12 months? Nearly 12 percent of respondents indicated that they felt that they were likely to lose their job, an increase of 1.8 percentage points from the fourth quarter and the second consecutive quarterly increase. Likelihood of job loss is 3.3 percentage points above the level from one year ago.

Both males and females felt less secure about their positions than they did in 2016. The percentage of males who felt that they would lose their job increased in the first quarter of 2017 to 13.7 percent from 12.7 percent in the prior quarter. Female concern over job security grew even more quickly, up 2.5 percentage points from last quarter to 9.9 percent.

In terms of race, whites remained the most confident they would not lose their jobs, with only 10.3 percent stating it was likely they would lose their job in the next 12 months, although this was up from 7.5 percent in the fourth quarter of 2016. While the likelihood of job loss for blacks increased over the last quarter by 3.5 percentage points, it remains slightly below year ago levels. Hispanics felt more secure about their jobs in the first quarter of 2017 than the fourth quarter, though less secure than they did Q1 2016.

Best Methods to Lure Active and Passive Job Candidates
Today’s challenge is no longer identifying and sourcing candidates, but getting their attention. According to one new study, the definition of active and passive candidate, and the perceived value of each, is evolving. Let’s take a closer look.

Males remain much more optimistic in the likelihood of receiving a promotion than females, with a gender gap of 10.2 percentage points. Nearly 28 percent of males indicated that they felt that it was likely they’ll receive a promotion vs. 17.4 percent of females. The gap between genders doubled over the last year. Over the last four quarters, males’ belief in the likelihood of promotion increased 6.3 percentage points, whereas females’ increased only 1.3 percent.

Millennials were the most inclined to anticipate a promotion, with nearly 40 percent of respondents in combined age brackets reporting that a promotion is likely. The middle age segment had the biggest increase in the belief of a promotion among all age groups, with an increase of 10.1 percentage points compared to year ago, and an increase of 7.5 points since the fourth quarter of 2016. The inverse relationship between the likelihood of a promotion and age remains, meaning the older someone gets, the less likely they are to feel they will get a promotion.

What Drives Employee Satisfaction
One challenge HR professionals continue to cite is creating and sustaining high degrees of employee engagement across their organizations and developing future leaders. Here’s what else makes people happy in their jobs.

The report also asked do you feel you’ll receive a raise of three percent or more after your next review? Almost one-third (30.8 percent) of survey respondents indicated that they anticipated a raise of three percent or more at their next review, increasing 2.5 percentage points since last quarter. This resulted in an increase in the likelihood of a raise index to 112.7 in the first quarter, up 9.2 points from Q4 2016 and a whopping 22.4 points from a year ago.

Males were more likely than females to anticipate getting a raise, 36.7 percent compared to 25.3 percent respectively—a difference of 11.3 percentage points. The gap between male and female expectations about getting a raise has more than doubled since the third quarter of 2015, though it held steady in the last quarter. Optimism increased by about 2.5 percentage points for both males and females in the first quarter of 2017.

As income increases, so does the belief in the likelihood of a raise. Overall, those with over $100,000 of annual household income were the most inclined to think they would get a raise, while those making under $35,000 were least optimistic. Since the first quarter of 2016, optimism of receiving a raise was highest for those making over $75,000, up over nine percentage points. The gap between higher income and lower income workers could be widening.

Minorities remain the most optimistic about the likelihood of getting a raise, as approximately 40 percent of both blacks and Hispanics anticipated a raise compared to only 26.9 percent of whites in the first quarter.

What Candidates Want. Shifting Priorities for Job Seekers
It’s clear that the changing global economy has created a demand for new jobs, new skills and new capabilities – and organizations are scrambling to find the best workers to fill these positions. A new report looks at the shifting priorities of job candidates.

Lastly, the HRO Today Magazine and Yoh report asked do you trust your company’s leadership to make sound decisions for the company and its employees and found that trust decreased slightly by 0.9 percentage points, down to 44.6 percent of respondents indicating that they trust their company’s leadership.

While the trust in company leadership index declined to 103.4 for the quarter, it is still nearly nine points higher than the first quarter of last year. While males are more likely to trust their company leadership than females (49.5 percent vs. 40.1 percent respectively), females’ trust level decreased by nearly two percent since last quarter, restoring the same magnitude of gap between the genders that was evident the same quarter last year.

Trust decreased for all income categories except for the highest earning respondents. 55.6 percent of those making over $100,000 a year reported increase of trust in company leadership, up 4.8 percent since the fourth quarter of 2016.