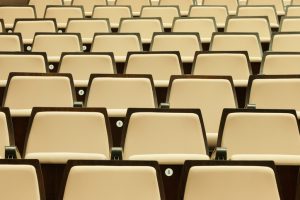 May 22, 2017 – The Arizona Theatre Company (ATC) board of directors has named David Ivers as its new artistic director. Executive recruitment firm AlbertHall&Associates conducted the nationwide search. ATC’s current artistic director, David Ira Goldstein, will remain with the company the end of June, when his 25-year tenure officially ends.

Mr. Ivers served as artistic director at the Utah Shakespeare Festival for seven years. He acted in and directed more than 50 productions with the company over two decades. Among his accomplishments, he helped lead a $40 million facilities expansion that included two new theatres, a new rehearsal hall, costume shop and administrative offices.

“The search process, guided and organized by consulting and executive recruiting firm AlbertHall&Associates, was extensive and, ultimately, incredibly rewarding with the hiring of David Ivers,” said ATC board chair Lynne Wood Dusenberry. “There were a number of truly wonderful candidates for the position, but David was clearly the right person to build upon David Ira Goldstein’s artistic legacy and guide Arizona Theatre Company to the next level of success.”

Mr. Ivers is looking forward to his new job and the possibilities it affords. “Because of the richness of the cultural offerings and heritage in both Tucson and Phoenix, I’m humbled and excited about Arizona Theatre Company’s impact, contribution and potential as we start the next half century,” he said. “ATC has been and should be the crown cultural jewel of Arizona and, though we bring great, thoughtful and quality theatre to two different communities, we serve the entire state.”

Now in its 50th season, Arizona Theatre Company is the preeminent fully professional theatre in Arizona. More than 130,000 people each year attend its performances at the historic Temple of Music and Art in Tucson, and the Herberger Theater Center in downtown Phoenix.

AlbertHall&Associates is an executive search firm dedicated to the leadership needs of arts, entertainment and non-profit organizations across North America. The firm is led by managing partner Thomas Hall, a non-profit leadership and management consultant working with clients across all disciplines of the sector. His industry experience includes nearly 25 years as managing director of San Diego’s Tony Award-winning Old Globe Theater.

Just recently, AlbertHall&Associates placed Hillary Hart as executive director of the Theatre Under the Stars (TUTS). The placement concluded an extensive 10-month national search. Theatre Under the Stars is a Houston based non-profit institution dedicated to enriching life through the experience of quality musical theatre and positively impacting lives beyond the stage through innovative education and community outreach initiatives.