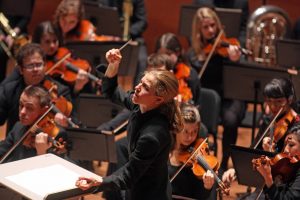 Mr. van Aalst has performed in the Sydney Youth Orchestra (violin) from 2001 to 2006 and served on the board of that organization from 2004 to 2008. In 2004, he joined a leading touring production company, where he managed over 250 productions while also seeking out funding from government grants and corporate sponsorship.

In 2008, he became orchestra manager of the Australian Chamber Orchestra, that country’s national touring orchestra. In addition to producing over 100 performances a year, touring Australia, Europe, Asia and the U.S., Mr. van Aalst managed the creation of two new festivals.

He relocated to London where he joined The Academy of St. Martin in the Fields. Originally orchestra manager, he was soon promoted to co-CEO and then CEO where he turned around the organization’s finances through a combination of touring income, creative programming and fundraising.

Named “a vital, artistically significant musical organization” by The Wall Street Journal, the New Jersey Symphony Orchestra embodies that vitality through its statewide presence and critically acclaimed performances, education partnerships and unparalleled access to music and the Orchestra’s superb musicians. Under the leadership of music director Jacques Lacombe, the NJSO presents classical, pops and family programs, as well as outdoor summer concerts and special events.

Other music organizations have been turning to executive search firms in recent months to find new leaders. Here’s a look at just a few: