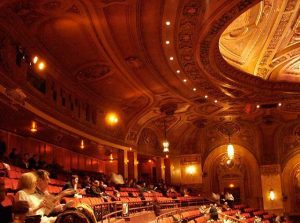 August 18, 2016 – Korn Ferry has recruited Michael Murphy as president of Shea’s Performing Arts Center. He replaces longtime Shea’s president Anthony Conte, who has decided to step down from the post.

Mr. Murphy is currently managing director of The Old Globe Theatre in San Diego, CA.  Prior to joining there in 2003, he worked as managing director of Austin Lyric Opera, director of administration of San Diego Opera and general manager of San Diego Repertory Theatre. He also held similar positions in New York at Theatre for a New Audience and the Joyce Theatre Foundation’s American Theatre Exchange. He serves on the executive committees of the National Alliance of Musical Theatre, League of Resident Theatres, and the Balboa Park Cultural Partnership, and on the boards of the National Corporate Theatre Fund and San Diego County Theatrical Trusts.

“We are thrilled to welcome Michael as president of Shea’s,” said John Zak, vice chair of Shea’s and head of the search committee. “Michael’s experience and passion for the theatre arts and his appreciation for the important role Shea’s plays as the anchor of a thriving downtown arts scene makes him a perfect fit to succeed Tony Conte.”

“Returning to Western New York and joining the extraordinary arts and culture community that makes Buffalo such a great place to live is a wonderful opportunity for me,” said Mr. Murphy. “The arts are tightly woven into the fabric of the region’s history and I’m honored and thrilled to be selected to work with the dedicated and talented Trustees, staff, and volunteers at Shea’s.”

Shea’s Performing Arts Center is a theater for touring Broadway musicals and special events in Buffalo, New York. Originally called Shea’s Buffalo, it was opened in 1926 to show silent movies and boasts one of the few theater organs in the U.S. that is still in operation in the theater for which it was designed.

Other performing arts organizations have been turning to executive search firms in recent months to find new leaders. Here’s a look at just a few: