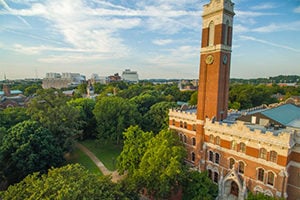 “A core value of this great university is a steadfast commitment to listening to, and learning from, a great diversity of perspectives to help drive us forward,” said Nicholas S. Zeppos, chancellor at Vanderbilt. “To that end, today and over the next several weeks I will undertake a variety of initiatives designed to gather input and spark dialogue about Vanderbilt athletics and what is needed to continue our progress.”

The university seeks a proven leader committed to build upon its foundation of creating an outstanding student-athlete experience grounded in rigorous academics and highly competitive athletics, said the school.

Among other efforts, Vanderbilt developed a new website designed to collect feedback from its community on what it wants in the new AD. “We are looking for someone to build on David’s legacy — someone who understands the value of learning and discovery and how that drives our mission of preparing student-athletes for success on and off the field,” Mr. Zeppos said. “Key to our choosing Korn Ferry to assist with our search is the firm’s demonstrated ability to recruit a pool of candidates with diverse experiences and backgrounds.”

Mr. Zeppos is embarking on a listening tour with coaches, students, alumni, faculty and staff, and the larger fan base. He is also scheduling a series of small-group meetings around the country with former players, longtime supporters of Vanderbilt athletics and other alumni leaders. All information gathered will inform the search process and provide information for the new athletics director.

Mr. Hughes, of Korn Ferry, is renowned for identifying, assessing and developing leaders for sports organizations. His relationships within sports and intercollegiate athletics are extensive, having spent 20 years coaching in professional and intercollegiate football and working for five Hall of Fame coaches. Jason Belzer of Forbes has called Mr. Hughes the most valuable connector of the sports industry. Mr. Bowlsby is also experienced in managing high-profile executive transitions at the collegiate level, joining Korn Ferry’s global sports practice in 2015.

Recently, Korn Ferry placed Carla Williams as the director of athletics at the University of Virginia. She becomes the first female African-American athletic director at a Power Five conference school and is the fifth active female AD at that level.

Eastman & Beaudine recently placed Michael Kelly as the new athletic director of the University of South Florida (USF). Mark Harlan stepped down from the post this spring. Mr. Kelly most recently served as COO for the College Football Playoff, where he directed the organization’s day-to-day operations and was instrumental in launching the playoff.

Turnkey Sports and Entertainment has placed Damin Evans as the new AD of the University of Maryland. Founder and CEO Len Perna, as well as managing director Gene DeFilippo, formerly Villanova’s athletic director, led the assignment. The previous AD, Kevin Anderson, took a six-month sabbatical and then resigned in April.