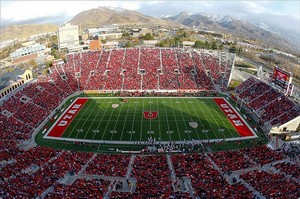 May 2, 2018 – University of Utah president Ruth V. Watkins has confirmed that Ventura Partners has been chosen to lead its search for a new athletic director. Chris Hill recently announced that he plans to retire this spring after 31 years on the job.

Chad Chatlos, sports practice leader at Ventura Partners, will work closely with Ms. Watkins and the search committee to find the new AD. The search committee is co-chaired by Patti Ross, the university’s chief strategy officer, and Manny Hendrix, associate director of development for the school’s athletic department. The committee will make recommendations to Ms. Watkins who will then select the final candidate. The search is expected to be completed by the end of June.

“We are excited that Utah selected our firm for this critical appointment and Chad Chatlos is uniquely qualified to partner with the search committee to lead a seamless and timely process,” said Bob Damon, a partner at Ventura.

“Our new athletic director will have the opportunity to make a significant contribution to the future direction and vitality of our university,” said Ms. Watkins. “I’m grateful to everyone on the committee for their time and willingness to participate in the search. Each member brings a unique perspective and I know each will bring valuable insight to the selection process.”

Utah offers 18 varsity sports – six for men, 11 for women, and one coeducational. In 2010, the school was invited to join the Pac-12 Conference, “a milestone that has proven to be transformational for our entire campus,” said Ms. Watkins.

Ventura Partners specializes in recruiting CFOs for private equity-owned companies, C-level executives for consumer and retail companies, and directors of athletics, coaches and administrators in professional sports organizations, colleges and universities. The firm, which was founded in 2010 by Julie Ford, maintains offices in Los Angeles, Chicago and Atlanta.

Mr. Chatlos specializes in senior executive searches across the sports industry with a focus on diverse roles in the intercollegiate athletics landscape. His clients include major sports leagues, teams, conferences and leading colleges and universities. He has completed Power Five athletic director and commissioner searches as well as head coaching searches for football, basketball, volleyball, softball, soccer, strength and conditioning, and more with marquee programs. In addition, he has led innovative searches in marketing, revenue-generating roles, eSports and player personnel positions.

Turnkey Sports and Entertainment has been enlisted by the University of Maryland to lead its search for a new athletic director. Founder and CEO Len Perna, as well as managing director Gene DeFilippo, formerly Villanova’s athletic director, are leading the assignment. The previous AD, Kevin Anderson, took a six-month sabbatical and then resigned in April.