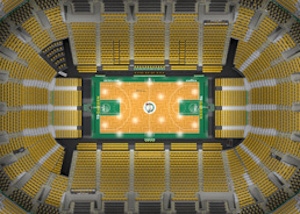 In her new role, Ms. Murray will maximize the event schedule strategy and growth, overseeing and supporting innovative technology initiatives to leverage visible and strategic vision for TD Garden and grow parent company Delaware North. In addition, she will be responsible for developing and managing all operational facility, event scheduling and management, operational functions and personnel related to ensure client satisfaction, retention and maximization of guest experience and profitability.

“When Amy Latimer, president of TD Garden, reached out to us to fill the role vacated by Hugh Lombardi’s departure, she clearly identified the need to think differently when sourcing candidates,” said Mr. Carmichael. “Yes, ideally, the successful candidate would have a great depth of understanding of how facilities are managed and operated, but Amy and the executives at Delaware North wanted someone who also had depth on the business side as well,” he added.

“Ms. Latimer reviewed numerous candidates we submitted during our search, some with traditional building operations experience (general manager types from world-class facilities worldwide) to some with unique leadership backgrounds and skill sets that centered more on customer-centric and cultural skills from leading businesses within the entertainment industry,” Mr. Carmichael added. “As Prodigy Sports does in every search we conduct, we developed an extremely diverse set of candidates, covering broad skill sets.”

Ms. Murray previously served as vice president of creative entertainment at The Walt Disney Company and has also spent the last seven years as an independent management consultant. She also serves as president of her own management consulting services company. Prior, she spent most of her career at Cirque Du Soleil, serving as vice president, tour planning and partnerships; assistant general manager, touring shows; tour services director; and additional roles throughout her time there. Ms. Murray also spent over seven years with Tennis Canada as special projects manager and tournament coordinator.

“Louise proved to be an excellent fit for TDG despite a background that doesn’t fit a traditional facility management role,” said Mr. Carmichael. “The past five years with Disney she guided the strategic direction, creative, development, and production of distinctive live entertainment for premier brands at Walt Disney World, and numerous other parks and resorts around the world. She brings a wealth of experience with one of the most iconic brands in the world with a core, unmatched competency of customer excellence.”

TD Garden is a multi-purpose arena in Boston named after its sponsor, TD Bank. It is the home arena for the Boston Bruins of the National Hockey League and Boston Celtics of the National Basketball Association. It is owned by Delaware North, whose CEO, Jeremy Jacobs, also owns the Bruins.

With over 60 years of experience in the sports & entertainment business, Prodigy Sports has established itself as one of the search industry’s leading specialist boutiques. The firm has placed hundreds of candidates into a variety of business functions and roles within organizations, representing all disciplines, including senior management, sales, marketing, operations, and administration.