Menu
View our Events
Stay Connected:
Artificial intelligence and other emerging technologies are already changing businesses around the world. In many ways, that’s good news. But it also poses some tough questions – and challenges. Let’s take a look back. 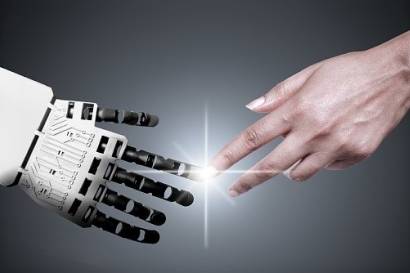 December 19, 2017 – One of our most important missions at Hunt Scanlon Media is to report on the trends that are altering the executive recruitment industry, and in many cases, the world of business. Among the most consequential transitions we’ve reported on this past year has been the rise of artificial intelligence – and what it means for the future of work and the future of the recruiting sector.

As our coverage has shown, these are exciting times for technology like automation and robotics and machine-learning. AI’s effect on growth, strategy, talent management and recruitment are already taking shape. But while the possibilities bring great hope, they also instill considerable uncertainty, and fear, with the biggest concern being what these changes will mean for jobs.

According to one report we told you about, as many as 375 million workers around the globe in the next dozen years will find themselves in new occupational categories that will require new skill-sets. Of course, that is to say nothing of the millions who may find themselves without a job altogether.

How organizations respond will be critical. So, too, will the advice executive recruiters offer. Experts told us throughout the year that strategic planning is essential, new organizational models will be needed and new roles will be developed that are non-existent today. A chief robotics officer, for one, will help shape everything from research to recruitment and retention. And with the need for AI talent growing, finding the right people for AI jobs – and retaining them amid a time of talent scarcity – becomes all the more vital.

In 2017, we gave you a glimpse into the future as it began to unfold. Here are the best of our stories about artificial intelligence from this year.

Artificial Intelligence to Transform Workplace Sooner Than Expected
We are entering a massive workplace shift that will be marked by rapid advances in automation and artificial intelligence. New research from McKinsey & Co. finds that between 75 million and 375 million workers globally will have to switch occupational …

Here’s Why Artificial Intelligence Raises Hopes, and Fears, Among HR Leaders
As artificial intelligence continues to make inroads into the working world, hiring managers are showing a combination of excitement for its potential and angst about its effects, according to a new study by the Allegis Group.

Three Trends That Will Shape the Future of Talent
The potential for job losses due to advances in technology is not a new concern among the global workforce. But over the past few years, fears of technology-driven job losses have emerged with advances in “smart automation” – the combination of artificial intelligence, robotics and other digital technologies.

Recruiters Face a Double Threat from Automation, But There’s Good News
Automation is already heavily impacting many jobs, especially those in manufacturing and agriculture. Of five million manufacturing jobs lost since 2000, machines have replaced 4.4 million of them, according to researchers at Ball State University.

DHR International Looks at the Rise of Robotics and Its Effect On the Workplace
Will your company survive the workforce disruption triggered by the rise of the robot, powered by a new wave of artificial intelligence? The so-called Fourth Industrial Revolution, “4IR” as it is known, is upon us, and it’s the advent of robotics that …

Why Data Analytics Is the New Game Changer for Search Firms
As workforce management paradigms shift to meet 21st century talent needs, HR leaders and executive recruiters are leveraging new tools and capitalizing on analytics to adapt their strategies and address changing trends. Anyone in charge of selecting a new leader has a daunting task in front of them.

Will AI Enhance Jobs, or Destroy Them?
For all the fear that artificial intelligence will displace workers, a new report has shown that high numbers of employees believe it will actually help rather than hurt their future prospects. 48% of U.K. business leaders surveyed for the study said that AI is likely to benefit them by bringing more flexibility to their work.

Robots Are Coming for Your Job. Here’s How, Why and When –
The potential for job losses due to advances in technology is not a new concern. But over the past few years, fears of technology-driven job losses have emerged with advances in ‘smart automation’ – the combination of artificial intelligence, robotics and other digital technologies.

How Automation Will Alter the Jobs Landscape
Rarely a day goes by without news of digitization, artificial intelligence and virtual reality impacting the workplace. Business leaders, politicians and economists want to quantify technology’s impact on employment — but no one knows for sure what the outcome will be.

Staying Ahead of Rivals, One Digital Footprint At a Time
Of course, the convergence of the static world with one that is online – which digital leaders oversee with increasingly sophisticated strategies and state-of-the-art technologies – is nothing new. But in the following interview, Camille Fetter takes aim at the shifting landscape and discusses the impact digital…

Will Most Talent Acquisition Roles Be Eliminated Over the Next Decade? Reshaping the World of Work In the Digital Age CEOs See More Value In Technology Than People