Menu
View our Events
Stay Connected:
Artificial intelligence and other emerging technologies are already changing businesses around the world. In many ways, that’s good news. But it also poses some tough questions – and challenges. A new report helps guide the way into the future. 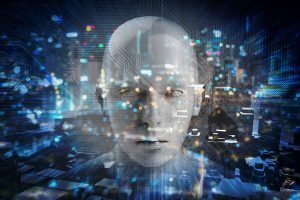 August 10, 2017 – Will your company survive the workforce disruption triggered by the rise of the robot, powered by a new wave of artificial intelligence?

The so-called Fourth Industrial Revolution, “4IR” as it is known, is upon us, and it’s the advent of robotics that promises to reshape global manufacturing as we know it.

Steve Stine, DHR International’s managing partner for Asia Pacific, has issued a new white paper, “The Rise of Robotics and Its Collision with the Workforce,” that is shedding light on this hot topic.

The advent of artificial intelligence, computer vision, navigation, MEMS sensor, and semiconductor technologies will drive innovation in the design and deployment of industrial robots in ways never before seen, said the report. This is an exciting time for manufacturers that are under constant pressure to optimize production to remain competitive. But it also brings risk.

For the past 30 years, companies shifted manufacturing to low-cost labor markets like China, Vietnam, Bangladesh and Indonesia to help manage the bottom line. More recently, however, wage inflation, a shortage of skilled workers, labor disputes, and an aging population have given companies cause to contemplate a wholesale transformation from human to robot labor.

Job loss is a politically charged topic, especially in the U.S., where lawmakers blame low-cost labor markets for the erosion of American manufacturing, according to the report. Certainly jobs have moved off-shore in recent decades, but it appears that robots are somewhat to blame, the report said.

A recent M.I.T. and Boston University report indicated that more than 670,000 U.S. jobs have been lost, not overseas, but because of robots displacing human labor. The trend is set to accelerate, with advances across the board in robotics, computer processing and artificial intelligence.

From large countries at the forefront of robot economic integration — such as China, Japan, Korea, the U.S., and Germany — to smaller markets such as Italy and Thailand, the effects of the robot revolution are already visible.

Ready to work for equality and justice? CEO Rachel B. Tiven and her crack team at Lambda Legal – the nation’s largest organization committed to achieving full recognition of the civil rights of lesbian, gay, bisexual, transgender and queer (LGBTQ) people – has come to Ezayo seeking a Director of People and Culture. Now’s your chance to become a talent change leader. Apply Now!

Today, Asia-Pacific is the fastest growing robotics market globally, led in large part by the intensity of manufacturing in China, Korea, and Japan, said DHR.

According to the latest IDC Worldwide Commercial Robotics Spending Guide, the region is responsible for over two-thirds of the worldwide spend on robotics technologies and related services. This is expected to grow to more than 70 percent by 2020.

Further evidence of the strength of the region is found in IDC’s 2016 Manufacturing Insights Survey. Over 44 percent of the Asia-Pacific manufacturing companies interviewed plan to adopt robotics by 2018, an impressive increase of 70 percent in just two years.

At a country level, China emerged as the global leader in industrial robot use four years ago, and has maintained its lead ever since, said the white paper. The government’s “Made in China 2025” strategic initiative identified automation as a key national priority and placed robotics research, production and adoption as a top industrial priority. 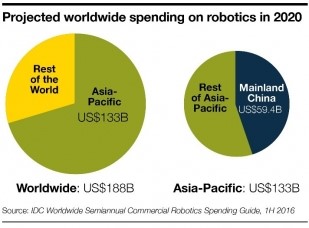 China’s annual spend on robotics and related services is projected to hit a staggering $59.4 billion by 2020, more than double 2016’s approximate spend of $24.6 billion.

As a result, China is on track to represent nearly half of Asia-Pacific’s estimated $133 billion spend on robotics and related services by 2020.

While China’s economic prowess can be largely attributed to its manufacturing strength in the last 25 years, its competitive edge is at risk, thanks in large part to escalating labor costs, the report pointed out. In the last 10 years, average annual wages have increased at a compound annual growth of 12 percent, significantly outstripping GDP and productivity growth over the same period.

Mr. Stine’s report said that while estimates vary, if one assumes that one robot is capable of replacing five to six human workers and that China will lose one million workers every year going forward, the country must add 160,000 to 200,000 multipurpose industrial robots each year just to maintain its current labor participation rate. Factor in automation upgrades, new-generation robotics, and standard depreciation, and the number per annum will likely run closer to 250,000 to 275,000 new robots per year.

The automotive industry has been a forerunner in robotics. In the early 1960s, General Motors installed its first so-called “Unimate” robots in its New Jersey manufacturing facility. Since then, the industry has remained the largest single industrial segment with a reliance on robots.

Robot “density” is a commonly used indicator in the industrial sector. And accordingly, China’s automotive industry leads the pack with a density of 392 robots per 10,000 employees in 2015, compared to a density of just 24 robots for the country’s composite manufacturing sector, said the DHR report. This is soon to change as scores of other manufacturing sub-sectors are snapping up industrial robotics solutions to augment and automate material management, core warehousing, logistics and assembly.

So, with this proliferation of ubiquitous automation, robotics, and artificial intelligence, how should the organization respond? The strategic, technical, operational and people issues will require careful consideration and planning. That might well explain the growing emergence of the role of chief robotics officer (CRO). While the scope and responsibilities of the CRO will vary from industry-to-industry, it is clear that integration of the role of robotics in an organization from manufacturing front-end to data management and delivery back-end, will be key.

According to DHR, some lead areas of responsibility are likely to include:

Astonishing technological developments in artificial intelligence, computer vision, navigation, MEMS sensor, and semiconductor technologies will continue to drive robotic innovation, elevating the capability, performance, autonomy, ease of use, and cost-effectiveness of industrial and service robots, the report said. Indeed, robotics is – and will remain – a central force in transforming our global industrial complex.

As is true in so many businesses today, disruption is inevitable. And while much of the focus is on the highly-charged issue of job security, the benefits of robotics in the design, development and output of new products and services holds promise of delivering to our manufacturing base improvements in operational agility, responsiveness and improved customer experience.

Are You Ready to Ride the Robotics Wave?

Successful adoption of robotics as part of an organization’s strategic charter will require some careful consideration and hard questions, said the DHR report. Among them:

Will Most Talent Acquisition Roles Be Eliminated Over the Next Decade?
While technology will never be able to replace the human factor in human resources, it will likely take over certain functions on talent acquisition. 72% of employers expect that some roles within talent acquisition will become completely automated…

While the rate of robotics adoption will vary across markets and sectors, one point is certain: The tension inherent in the supply and demand of robotics talent will pose a challenge to both pioneers and laggards in the robotics evolution.

For early adopters, investment in recruiting, training and developing new talent capable of guiding and incorporating robotics into an organization will prove critical. Once recruited, holding onto key talent could prove even more difficult. As with data scientists and their role in the emergence of big data and analytics, so will the retention of robotics design and engineering talent be of central importance  in manufacturing. Balancing these investments with efforts to retrain, reskill, and redeploy employees who’ve been displaced, will demand that leaders assume finesse and diplomacy sufficient to navigate the politics and lawsuits oftentimes associated with this level of structural change.

DHR said that while the manufacturing sector will be the first to grapple with these key innovations, to say nothing of people transformation issues, the service sector should also be prepared. Just as vending machines displaced soda stands some 50 years ago, it’s likely that one day soon you find your latte handed to you by a robot in an apron.