Menu
View our Events
Stay Connected:
Technology has long been seen as a threat to jobs. But when employees were asked about it, they disagreed with long held assumptions. Here’s why. 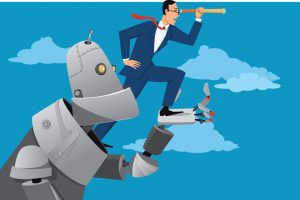 May 26, 2017 – For all the fear that artificial intelligence will displace workers, a new report has shown that high numbers of employees believe it will actually help rather than hurt their future prospects. Forty eight percent of U.K. business leaders surveyed for the study said that AI is likely to benefit them by bringing more flexibility to their work.

The staffing firm Adecco polled more than 1,000 board and senior level employees for its ‘Humans vs. Robots’ report. Among other findings, two thirds (65 percent) of the leaders said that technology has generally delivered more jobs than it has taken away. From a broader perspective, the report also said that more than half of those surveyed (54 percent) think that worldwide over the next 10 years technology is going to produce even more opportunities than it jettisons.

“Far from the widespread fear that automation will make employees redundant, our research shows that the workplace could create opportunities for more flexible and fulfilling work,” said Alex Fleming, managing director for Adecco U.K. and Ireland. “Many organizations and employees are buying into the idea of flexible working, but struggling to implement the reality. Our research suggests that robots could be a significant part of the solution.”

Dr. Carl Benedikt Frey, co-director of the Oxford Martin Programme on Technology and Employment, concurred, describing a future in which intelligent machines heighten human capabilities. “In many ways, robots could enhance careers rather than destroy them,” he said. “The introduction of automation in the workplace will usher in a time where our jobs will become more creative and involve more social interaction. Although robots will render some occupations obsolete, as technology has in the past, humans and robots will also complement each other in many tasks, creating new types of jobs.”

This Side of the Pond

Computers are going to make their jobs easier in the next decade, said the vast majority (87 percent) of the leaders polled. Fifty seven percent of those individuals took it a step further, expecting that computers will make their jobs “a lot easier.” Sixty eight percent of the respondents in the IT and telecom sector agreed with that sentiment.

Josh Withers, founder and managing director, North America, of True Search in Haddonfield, NJ, said venture capital firms are asking about AI and machine learning in every deal they consider. “We are also seeing increased demand, particularly among companies looking to automate clerical duties and routine paperwork,” he said. “These companies are major global players and there is significant customer interest.”

Many of True Search’s clients, however, worry that that AI talent is in short supply everywhere except perhaps for businesses like Google and Facebook, which pay big premiums for such talent, said Mr. Withers. “Over time, however, we think supply will better align with demand as universities offer more programs that gain traction,” he said. “In fact, more than ever students and up-and-coming software engineers are utilizing AI early and often. We expect a bigger wave of products and talent coming soon.”

Will Most Talent Acquisition Roles Be Eliminated Over the Next Decade?
While technology will never be able to replace the human factor in human resources, it will likely take over certain functions on talent acquisition. 72 percent of employers expect that some roles within talent acquisition will become completely automated within the next 10 years.

Rahul Kapur, managing director at ZRG Partners in Rochelle Park, NJ, said that across industries his firm’s clients are in large part embracing automation. There is a proactive mindset at work, he said, that was lacking 20 years ago when the Internet was emerging. “In some industries, such as manufacturing, the impact on the workforce is seen as more profound and direct; robotics and AI will impact existing jobs through automation,” Mr. Kapur said.

“In other industries, however, our clients are actually embracing robotics faster than they previously did with the internet in the mid to late 90s and mobility in the past decade,” he noted. “Most leaders we work with aren’t falling into the same trap that left some behind in those eras; instead, they are seeking ways to get their company and their workforce ahead of the innovation curve.”

In many ways, the shift toward the latest technology is just beginning, said Clark Beecher, managing partner and co-founder of Beecher Reagan Advisors in New York. And the results, so far at least, are mixed. “Socially, executives resist the notion of AI taking human jobs,” Mr. Beecher said. “However, to compete going forward you will have to adopt AI. You will see it first around the automation of process jobs. I think there is a silver lining. AI will create new management position and high paying white collar jobs.”

How Automation Will Alter the Jobs Landscape
Rarely a day goes by without news of digitization, artificial intelligence and virtual reality impacting the workplace. Business leaders, politicians and economists want to quantify technology’s impact on employment — but no one knows for sure what the outcome will be.

Many of those who responded to the Adecco survey were optimistic that technology would boost flexibility in their work. Mr. Withers, of True Search, explained that AI, for instance, will automate the more mundane aspects of a job. For example, he pointed to the executive search industry, where research could be automated. “This would free up people to work on the more strategic and high touch parts of the workflow,” he said. “I think various industries will figure out the best ways to supplement workforces to create efficiencies throughout their organizations.”

Mr. Kapur, of ZRG, noted that right now, innovations like mobility, social media and the cloud are having the greatest impact on workforce flexibility. Yet AI will continue to change how people work. “We already have seen a shift to a much more flexible workforce,” he said. “Even companies with historically traditional work environments, centered on the having workers in the office, are already moving to more shared space, work at home arrangements, etc. The changes that people have in their personal lives are things they want in their work lives, and that includes mobility, location-agnostic environments, and time flexibility.”

The trends of the day will only further this, said Mr. Kapur. Virtual reality, for example, will become more than a novelty: It will become a business collaboration tool. “This will enhance the virtual meeting experience, allowing people three-dimensional interactions that replace travel, commuting and the cost of space plus other ancillary qualitative and quantitative costs,” said Mr. Kapur. “It also has the potential to combine with robotics to allow for a safer experience for a manufacturing technician but allowing that worker to perform his or her duties outside of the dangers of a factory.”

Reshaping the World of Work In the Digital Age
Business and human resource leaders should rethink almost all of their management and HR practices as the proliferation of digital technologies transform the way organizations work, according to predictions for 2017 from Bersin by Deloitte.

One finding from the Adecco report that cannot be ignored is the importance of preparing employees for the future. “Upskilling,” or teaching employees new skills, will be essential to the shift to AI and other technology, said 95 percent of the leaders. The workplace of the future will depend on such training more than any other factor, said close to two-thirds (62 percent) of them.

Mr. Withers said he has seen widespread recognition that the workforce needs to evolve.  “Our client O’Reilly Media is helping to drive this change with their learning platform,” he said. “As a firm, True, and our umbrella company True Talent Advisory, are continuously innovating in the human capital space so robust learning and development programs and strategic hires at all levels are always top of mind.”

This concept is not lost on ZRG Partners. Emerging technology is creating new types of jobs, explained Mr. Kapur, and moving forward will be impossible without employees who have the skills to perform those jobs. “For example, as banks leverage robotics for the more standard transactional elements and to analyze the patterns and behaviors of customers, the need to manage the experience and capability robots provide, assess and react to the analytics, and ensure cybersecurity of the technology all expand,” said Mr. Kapur. “Across all industries, our clients see robotics as the impetus to change how they spend on their workforce, and these digital and technical capabilities will continue to grow.”

CEOs See More Value In Technology Than People
CEOs face the challenge of making strategic decisions not only about where to invest now but also about where to lay the foundations for their organizations’ future success. That increasingly has required them to seek answers to critical questions about the future of work.

Like the respondents in the Adecco survey, Mr. Kapur said that technology in many ways forces people to be more creative and … well, human. “Robotics can facilitate, but not replace, interaction and relationship with the customer,” he said. “Again, this is an opportunity to retrain and upskill workers who, instead of performing the transactional elements of the customer experience, now must focus on creativity, interpersonal and emotional intelligence, and technical understanding.”

That’s a concept that Mr. Beecher wholeheartedly embraces. Technology is great – no one disagrees – but time and again, success comes back to relationships and how one deals with customers. Now more than ever, it is people, not machines, that will make a difference. “Upskilling is a new term for an old topic,” said Mr. Beecher. “Upskilling is training, developing and mentoring people to grow professionally. As I mentioned, the skills needed in the new world of AI are management and critical thinking. Also, people skills will be in high demand. Connecting with your customer/clients become even more important.”