Menu
View our Events
Stay Connected:
Within the next five years, robots, artificial intelligence, automation and other emerging technologies could massively change recruiting as we know it. So much so that recruiters’ jobs will likely depend on how well they adapt. 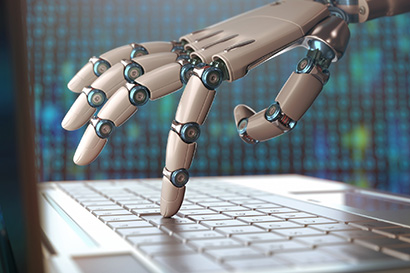 September 18, 2017 – Automation is already heavily impacting many jobs, especially those in manufacturing and agriculture. Of five million manufacturing jobs lost since 2000, machines have replaced 4.4 million of them, according to researchers at Ball State University.

Experts expect these same forces to hit white-collar jobs. After all, technology is cheaper than human labor, increases productivity, and often works better. The impact could be staggering. An Oxford University study found that robots and “smart” computers could replace up to half the U.S. workforce within the next decade or two. Consulting and accounting firm PwC, meanwhile, has said that 38 percent of today’s jobs could be eliminated in the next 15 years.

“Whatever figure we look at, many U.S. jobs are going to be threatened by emerging technologies,” ENGAGE Talent CEO Joseph Hanna said. “There’s no reason to expect that recruiters will be immune.”

Mr. Hanna’s firm is on a journey to solve a relatively difficult data and artificial intelligence challenge that’s cropped up and is now seen as one of the most pressing dilemmas of 21st century hiring: predicting people’s job security and likelihood to change jobs based on their professional background, career progression, and events impacting their companies and industries. It is a new frontier, but one that is expected to take center stage as recruiters and talent acquisition leaders race to solve it.

For ENGAGE Talent, the first application of its science is to enable recruiters to conduct market research, identify talent pools to target, and build a pipeline of passive candidates who are more likely to engage in a job change discussion. “Our science is based on three decades of validated academic and industry research of the events that lead to turnover,” said Mr. Hanna. “It relies on long term studies of career progression and the market forces impacting engagement and attrition.”

A Double Threat for Recruiters

There is some good news: “Recruiter” didn’t make the Oxford University study’s list of the top 10 jobs threatened by computer automation; and just as automation threatens many jobs, it will also create others, opening up new opportunities. The worry, however, is that jobs lost due to automation will greatly outnumber jobs gained. If so, recruiters will face a double threat from automation.

First, if employers’ need for labor is lower, there will be fewer jobs for recruiters to fill, and thus less need for recruiters. Recruiters who specialize in certain hard-hit sectors—such as banking and finance—might especially be affected. Thirty percent of financial and banking sector jobs could be eliminated by 2025, according to Citigroup.

DHR International Looks at the Rise of Robotics and Its Effect On the Workplace
Will your company survive the workforce disruption triggered by the rise of the robot, powered by a new wave of artificial intelligence? The so-called Fourth Industrial Revolution, “4IR” as it is known, is upon us.

Second, robots and artificial intelligence will directly impact recruiters’ jobs. We anticipate that 80 percent of the tasks that recruiters perform today will be automated.

That’s right, 80 percent. Even if that number proves a bit high, the ramifications are obvious. Many recruiting jobs will be eliminated because the same work would require fewer people. To survive, recruiters will need to do the 20 percent of tasks that can’t be automated very, very well. Those who fail to do so won’t be successful, and may very well find themselves out of a job.

The Automation of Recruiting

What aspects of recruiting will be automated? Basically anything that doesn’t involve direct, emotional interaction with candidates is likely to be automated, including:

What’s going to be left for recruiters to do? Tasks that relate to human emotional and intellectual connection – Mr. Robot won’t be able to handle those. So you will need, even more than now, to excel at:

That last bullet point might surprise you. After all, technologies that are designed to assess cultural fit already exist. However, those technologies have a long way to go. We rate them a three on a scale of one to 10. We expect that people – recruiters – will continue to best predict cultural fit.

“The good news is that automation will eliminate the mundane, repetitive tasks, allowing recruiters to focus on more rewarding parts of the job, including strategy and assessment,” Mr. Hanna said.

People Skills: The Skills of the Future?

The need for recruiters to perfect their people skills is not unusual. Experts believe it will be a trend in many industries.

“What can’t be replaced in any organization imaginable in the future is precisely what seems overlooked today: liberal arts skills, such as creativity, empathy, listening, and vision,” Tom Perrault writes in Harvard Business Review. “These skills, not digital or technological ones, will hold the keys to a company’s future success.”

ENGAGE Research Identifies Top 2017 Employee Tenure Trends and a Tightening Labor Market
An already tight labor market has likely only continued to tighten over the past 18 months, an analysis of ENGAGE Talent tenure data shows. The study by ENGAGE data scientists concluded that the current median job tenure is 3.67 years.

“Manual and routine tasks are more susceptible to automation, while social skills are relatively less automatable,” wrote John Hawksworth, chief economist at PwC. “That said, no industry is entirely immune from future advances in robotics and AI.”

Of course, it will be essential as a recruiter to successfully adapt to new technologies, or else you won’t be able to remain relevant. And, as the new jobs that arise from automation become in-demand, it will pay off to be able to successfully recruit great talent for those jobs.

But for now, we know big changes are coming to recruiting. It’s best to be aware that they are coming, to be prepared for them, and to be ready to adapt.