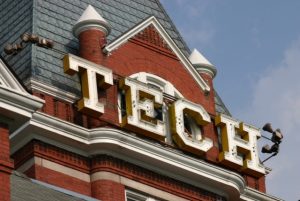 September 22, 2016 – Sports and entertainment-focused executive recruiter Turnkey Search has been retained by Georgia Tech to lead its search for a new director of athletics. Mike Bobinski, the school’s past athletic director, has left his position to take on the same role at Purdue University. DHR managing partner and global sports practice leader, Glenn Sugiyama, led that assignment.

The hunt for Georgia Tech’s AD is being led by senior executive director Gene DeFilippo, a former athletic director at Boston College, Villanova and University of Kentucky, along with Len Perna, founder, president and chief executive officer of Turnkey Search. They will be assisted by recruiting associate Kyle Brown.

“It’s a privilege to have the opportunity to work with Georgia Tech on this search,” said Mr. DeFilippo. “We’ve hit the ground running to identify the perfect candidate to take the reins at Tech’s athletic department and build on the many successes the program has already achieved.”

“We’re looking forward to working with Turnkey Search on an efficient process in the coming weeks and months,” said G.P. Peterson, president of Georgia Tech. “Our next director of athletics will be a strong leader tasked with building on the Institute’s history of successfully combining athletic achievement with academic excellence.”

One of the ACC’s most well-rounded athletic departments, the Georgia Tech Athletic Association supports more than 400 active student-athletes utilizing a $75 million budget. Academically, 165 of Tech’s student-athletes made the 2015-16 ACC Academic Honor Roll, and more than half of the institution’s student-athletes earned a 3.0 or higher GPA that same spring.

Just recently, Turnkey Search recruited Mark Coyle as director of athletics at the University of Minnesota. The University paid Turnkey Search $150,000 plus expenses to recruit and vet candidates for the position. To find the new candidate, the school used a 16-person search committee comprised of faculty members, current and former athletes, statewide business leaders and a head coach.

Georgia Tech and the University of Minnesota are just two of an expanding number of schools turning to executive search firms to find athletics directors. Here’s a sampling of recent assignments from the Hunt Scanlon Media archives: