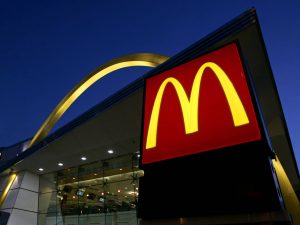 Under Ms. Harris’ leadership, McDonald’s has been widely recognized for its commitment to diversity, including winning the coveted Catalyst Award for its global women’s initiative; achieving a score of 100 in the Human Rights Campaign’s Corporate Equality Index; and being named in Fortune’s “Top 50 Places for Minorities to Work,” Black Enterprise’s “Top 40 Companies for Diversity,” and Latina Style’s “Best Companies for Latinas.”

Looking Through a New Lens

In a highly unusual succession arrangement, Ms. Harris and Ms. Lewis will work together to provide a seamless transition over the next several months. “I agree, it is highly unusual to have this sort of succession setup and most of the time we don’t recommend it because in some ways it can affect the success of the new person coming in, particularly if the newcomer wants to make strategic changes,” said Mr. Carrington.

“But, in this case, I think it will work quite well,” he added. “What we have now is an organization that is open to looking at diversity through the lens of a new leader. To that end, we succeeded as a search firm in our mission.”

As global chief diversity officer, Ms. Lewis will oversee the development and implementation of diversity and inclusion strategies and community engagement for McDonald’s and its restaurants around the globe. In the months ahead, she and Ms. Harris will work together to set McDonald’s on its new course.

“We know Wendy will build upon McDonald’s rich history of diversity and inclusion and ensure we leverage this advantage to fuel our growth and innovation,” said David Fairhurst, McDonald’s EVP and chief people officer. “We thank Pat for four decades of outstanding service and congratulate her on a well-deserved retirement.”

Ms. Lewis has ranked among MLB’s highest rated black executives. At Major League Baseball, she developed new initiatives to advance the level of MLB’s workforce and supplier diversity efforts and industry-wide diversity training. She oversaw MLB’s Executive Development Program and The Diverse Business Partners Program, considered the premier supplier diversity program in sports. Since its formation, more than $1 billion has been spent with thousands of minority-owned and women-owned businesses. Ms. Lewis was also responsible for the creation of MLB’s ‘Diversity Business Summit,’ the premier employment conference and supplier diversity trade fair.

In this ‘Talent Talks’ podcast episode, Willie Carrington reexamines the search he just concluded to find McDonald’s next global chief diversity officer. What led him to search the rosters at MLB, the challenges of replacing a long-seated leader, and a bird’s eye look at the unusual succession plan now being played out inside McDonald’s C-suite – It’s all here in this engaging and highly informative podcast. Listen Now.

“MLB was not a top-of-mind thought at first among any of us,” said Mr. Carrington. “But when we looked underneath the organization, and peeled back the layers, we realized, ‘Oh, MLB is made up of a bunch of franchises; secondly, MLB franchisees are independent owners although they are affiliated with Major League Baseball.’ So there’s this multitude of relationships taking place in that world – and decisions being made in reference to guidelines being set by an overriding body. Well, that’s exactly what McDonald’s is in many respects.” The similarities became obvious, he noted, as he and his team pushed further along with their due diligence.

McDonald’s itself made the search task both easy and difficult, said Mr. Carrington. “They said, ‘We aren’t restricting the search to our industry – namely, hospitality and food service – we just want you to look at the whole body of candidates possibly available.’” The problem, Mr. Carrington said, is “that mandate easily translates into very large numbers of candidates from different industries and functions – and we therefore must consider a lot more candidates. So, that broad approach made my job easier, but harder.”

In the end, Mr. Carrington decided not to broadly promote the job. “We knew that might generate just too much interest and that could overwhelm us.” So, he said, “we kept the search very close.” He ended up with a strong body of candidates with broad experiences. In addition to Ms. Lewis, four other top candidates were fielded to McDonald’s. The search committee whittled that short list further down to three, all of whom were invited back for final interviews. In the end, MLB’s Ms. Lewis got the nod.

“It was a classic search. All assignments like this are difficult because each company has a peculiar desire to shape the position of chief diversity officer exactly for themselves,” said Mr. Carrington. “And that, in many respects, prevents many candidates from being qualified.” In other words, the more unique the position specification is, the fewer potential candidates fit the bill.

“McDonald’s has a strong culture of promoting from the bottom up,” Mr. Carrington added. Therefore, any search of this magnitude outside the confines of the company can also make it a difficult process to steer.

What was the biggest challenge of the entire search? “We were replacing someone who was revered and had been with McDonald’s for four decades,” said Mr. Carrington.  Ms. Harris represented the institution, its thinking, its history, its culture and its knowledge base. “That frightened away some people,” said Mr. Carrington.

“So, ‘You don’t replace a Patricia Harris,’ is the way I approached this. In effect, that mindset convinced me that we needed to find someone who could bring a new sense of direction to McDonald’s and to build upon what has been created. Ms. Harris took some giant steps and made deep imprints at McDonald’s that were almost set in stone. And so, the person coming in is not erasing those big footprints, in as much as adding to them. That’s the approach I took,” said Mr. Carrington.

Diversity, Mr. Carrington said, is not one of those things that’s going to be resolved in a few years time. “We say, rather, that it’s a march of a thousand years.” He said diversity is one of those “nebulous areas” that changes with time and circumstance, and gets affected by so many things in the market.

Headquartered in Chicago, with offices in Washington, D.C., and Memphis, Carrington & Carrington specializes in the recruitment and placement of African Americans, Latinos, women, LGBT and other diverse professionals. The firm places middle management and senior level executives across various industries and functional areas. The firm was founded by Mr. Carrington 37 years ago and today ranks as one of the most respected African American-owned search firms in the nation.

Mr. Carrington has played and continues to play a significant role in increasing the representation of diverse professionals in major business sectors, including banking, finance, manufacturing, and utilities. His belief, he said, has always been a simple one: “Strength through diversity and inclusion.” That personal and professional credo has helped Mr. Carrington keep his client’s businesses competitive by keeping their talent pipelines diverse.

“Chief diversity officers are extremely important across the spectrum,” said Edie Fraser, CEO of STEMconnector and its Million Women Mentors (MWM) Initiative. She also serves as vice chairman of Diversified Search. “Their roles have shifted to insuring diverse talent as a primary role although they oversee outreach with organizations and are also often dotted lined to marketing and to supplier diversity for procurement.”

Diversity officers, she said, are today “considered part of the business team.” And institutions of all stripes are lining up to bring them on board.