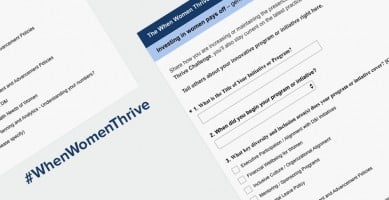 February 22, 2016 – Women are under-represented in the workforce globally, and if organizations maintain the current rate of progress, female representation will reach only 40 percent globally in the professional and managerial ranks by 2025, according to Mercer’s second annual ‘When Women Thrive’ global report.

Among the key trends revealed in the report is that women’s representation within organizations declines as career levels rise – from support staff through to the executive level.

“The traditional methods of advancing women aren’t moving the needle, and under-representation of women around the world has become an economic and social travesty,” said Pat Milligan, Mercer’s global leader of ‘When Women Thrive.’ “While leaders have been focusing on women at the top, they’re largely ignoring the female talent pipelines so critical to maintaining progress.”

“This is a call-to-action – every organization has a choice to stay with the status quo or drive their growth, communities and economies through the power of women,” said Ms. Milligan.

Mercer’s report finds that although women are 1.5 times more likely than men to be hired at the executive level, they are also leaving organizations from the highest rank at 1.3 times the rate of men, undermining gains at the top.

The report also found that women make up 40 percent of the average company’s workforce. Globally, they represent 33 percent of managers, 26 percent of senior managers, and 20 percent of executives.

In terms of regional rankings, Latin America is projected to increase women’s representation from 36 percent now to 49 percent in 2025; followed by Australia/New Zealand moving from 35 percent to 40 percent; U.S./Canada improving by just one percent from 39 percent to 40 percent; Europe remaining flat at 37 percent; and Asia ranking last at 28 percent, up from just 25 percent.

“In 10 years, organizations won’t even be close to gender equality in most regions of the world,” said Ms. Milligan. “If CEOs want to drive their growth tomorrow through diversity, they need to take action today.”

The research, which included input from nearly 600 organizations around the world, employing 3.2 million people (and including 1.3 million women), identifies a host of key drivers known to improve diversity and inclusion efforts.

“It’s not enough to create a band aid program,” said Brian Levine, Mercer’s innovation leader for global workforce analytics. “Most companies aren’t focused on the complete talent pipeline nor are they focused on the supporting practices and cultural change critical to ensure that women will be successful in their organizations.”

Only nine percent of organizations surveyed globally offer women-focused retirement and savings programs with the U.S./Canada ranking first (14 percent), despite Mercer’s research proving that such efforts lead to greater representation of women.

For more information on the Mercer report, check out this short video:

A look at one industry that coincidentally happens to be in charge of talent acquisition shows something quite different than what the Mercer report found. According to data collected by Hunt Scanlon Media, women in the executive search industry have made considerable progress over the last quarter century, and they continue to do so on a global basis.

A massive restructuring has been underway in the executive search business for much of the last decade, from the products and services being delivered to who’s delivering them.

One result has been that more women are discovering how well-suited they are to the identification and assessment of corporate leaders, and they have been penetrating the business from top to bottom. Women, it turns out, have been found to be highly adept at building and maintaining relationships with clients and candidates, an ‘external affiliating’ skill set perhaps they more uniquely possess than their male counterparts.

“That personal touch is one factor that is only going to become more critical,” said Hunt Scanlon president Christopher W. Hunt. “Expect women to have an ever expanding role in who gets what top job, and where.”

Elaine Filimon, who heads boutique search firm Filimon Partners in Arlington, Virginia, says that 15 to 20 years ago female role models in the search business were hard to come by. But as more women have gotten into the business, many of them starting boutique firms of their own, they in turn have introduced more women into the recruiting field. That, she believes, lies at the heart of the exponential growth rates of women in the industry.

“What’s more, there are more female executives today on the client side,” said Ms. Filimon. “So women in search feel far more comfortable, and less threatened, interacting with a professional of the same gender.”

According to the latest research compiled by Hunt Scanlon Media over the last quarter century, just 17 percent of the total consultant ranks of the ‘Big Five’ global search firms were female in 1991. That number doubled recently to 37 percent.

What’s more, while these industry leading firms claimed 907 total consultants 23 years ago, Hunt Scanlon’s latest figures show there are now nearly 1,995. During that time, the number of female consultants rose from 156 to 732. So, while the top five search firms doubled in overall consultant workforce, their female consultant ranks increased five-fold during this period.

“It’s all about relationships and women in many cases are particularly gifted at being able to build upon that,” said Judith M. von Seldeneck, founder and chairman of Diversified Search. “The recruiting business requires strong organizational skills. It requires intuitiveness and an ability to really understand what’s going on in cultures and in understanding the business drivers.” Ms. von Seldeneck said these are things that women do really well.

“They’re used to making families work and relationships work,” said added. “They’re the ones that are the glue that holds it all together, and that’s the same kind of glue that you need to be a top-notch search consultant.”

Check Out These Related Articles On Women In Business and Executive Search: