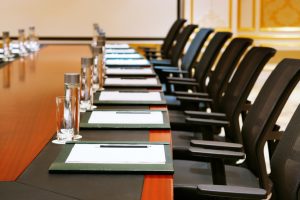 May 24, 2016 – For the seventh consecutive year, the percent of directors of Hispanic origin elected to Fortune 500 boards was sharply lower than the overall representation of Hispanics in the U.S. population, according to the Heidrick & Struggles 2016 board monitor.

Of 399 new directors appointed by Fortune 500 companies in 2015, only 16 were Hispanic — a measly four percent. Over the past seven years, an average of 4.7 percent of new directors have been Hispanic. That dire statistic reveals there has been no discernible upward trend. Nothing. As the Hispanic share of the U.S. population has grown during those years, the gap of under-representation in the boardroom has therefore widened.

“The percentage of Hispanic directors appointed to boards has not improved over the past seven years,” said Bonnie Gwin, vice chairman and co-managing partner of Heidrick & Struggles’ global CEO & board practice. “We live in a hyper-connected world, and global and domestic markets are changing at a rapid pace — the boardroom needs to reflect that level of change, too.”

“The United States has the second-largest Spanish-speaking population in the world, only Mexico’s is greater. U.S. Latinos collectively represent the world’s 14th largest economy, yet Hispanic directors continue to be largely absent from the corporate boardroom in America,” said Cid Wilson, president and CEO of the Hispanic Association on Corporate Responsibility (HACR). “The business case for appointing Hispanic directors has become even more compelling today. Companies need to do more to recruit Latinos into the boardroom if they are to compete successfully for the growing Latino consumers and future talent.”

Despite this clear social and economic impact, there are only nine Hispanic CEOs today in the Fortune 500, and that is likely leading to a shortage of Hispanic candidates being considered for board seats.

“The focus on board candidates who are sitting or retired CEOs slows the advancement of diversity in the boardroom, because the pool of current and former CEOs is not sufficiently diverse,” Ms. Gwin said. 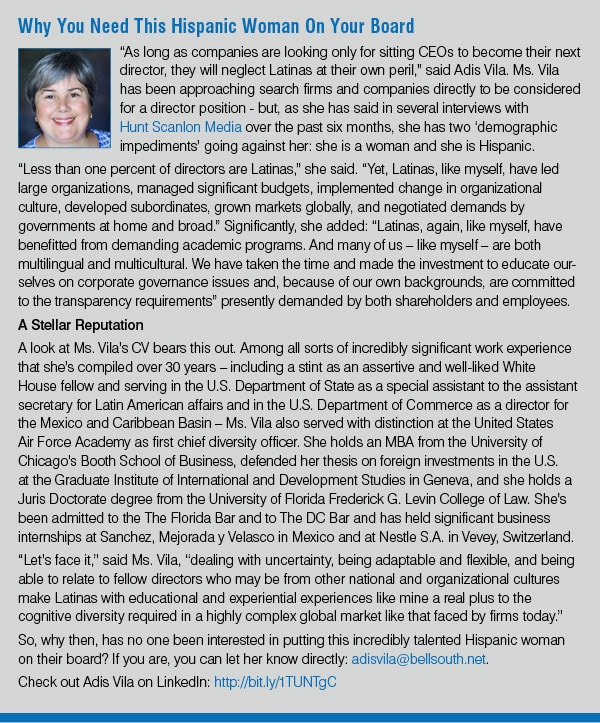 Little to No Progress for Women

Heidrick’s report also found that women accounted for 29.8 percent of new directors in 2015, up only slightly from 29.2 percent in 2014. “Any progress seen there is simply a rounding error,” said Scott A. Scanlon, founding chairman and CEO of Hunt Scanlon Media. Yes, it is true that the percentage of new female directors has been increasing steadily each year from 18 percent in 2009. But it was just last year that Heidrick & Struggles projected that women would account for 50 percent of new directors for the first time in 2024. With this most recent data the search firm is now projecting that women will not reach parity with men in numbers of new directors until 2026.

Colleen Hulce, founder and CEO of search firm Hulce Associates based in Marina Del Ray, CA, said the major emphasis has been on recruiting females to boards for the last several years. But, she said, “there is still tokenism at play to the extent that once a board has one or two women there’s the sense, ‘That’s enough, we are now diverse,’ when the reality, of course, is that the gender is still under-represented.”

“Experienced general managers, finance executives, and functional leaders can make significant contributions in the boardroom,” said Ms. Gwin. “For example, as companies have looked beyond the CEO ranks to add highly qualified female board directors, that has contributed to a steady, albeit slow, increase in the percentage of women among newly appointed directors.”

Much the Same for African Americans and Asians

In Other Countries It’s Even Worse

Despite slowing progress in the U.S., other countries have fared far worse when it comes to gaining new women directors.

Women make up just 10.2 percent of all directors across boardrooms in Asia Pacific, according to a recent study by Korn Ferry and the National University of Singapore (NUS) Business School’s Center for Governance, Institutions and Organizations (CGIO). The research showed some countries with very low female board representation, including: South Korea (women only occupying 2.6 percent of boards seats); Japan (3.3 percent); and Singapore (7.7 percent). Most of the countries reviewed in the report showed little or no improvement in gender diversity, with the exception of Australia, Malaysia and India.

“There is no doubt that a gender-balanced and diverse board can add real value to operational and financial performance,” said Alicia Yi, managing director, board & CEO services at Korn Ferry. “We have a long way to go when it comes to fully embracing diversity. Thus, a stronger push is needed to bring corporate boards to the next level in the region.”

Within Latin America, women hold only 6.5 percent of board positions, according to Egon Zehnder’s ‘2016 Latin American Board Diversity Analysis’ report. Low female board representation was widespread through the region with only Columbia (14 percent) having more than 10 percent of women board directors. All other countries had eight percent or less.

“When compared to Europe, the U.S. and Canada, Latin America lags behind in the percentages of sitting women board directors and in the rate of annual appointment,” said Cristina Manterola, a Santiago-based Egon Zehnder consultant and regional leader of the firm’s global diversity & inclusion council. “While it appears that the idea of gender diversity in the boardroom may be gaining some traction in Latin America, businesses must accelerate the cultivation of ready women candidates and increase the pool of board-ready women nominees as other regions have done at an aggressive rate.”

Check Out These Related Articles On Countries That ARE Making Progress: