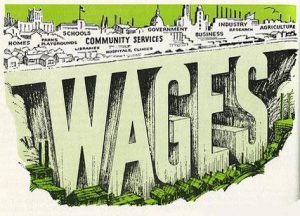 December 12, 2016 – A forecast just issued by the Hay Group division of Korn Ferry reveals that, adjusted for inflation, workers around the world are expected to see real wage increases of 2.3 percent, down slightly from last year’s 2.7 percent. The study found that North America is predicted to see slower salary increases than other global regions, with only a 2.8 percent projected increase – the same as last year. Adjusted for inflation, the real wage increase is 1.4 percent.

In the U.S., a three percent salary increase is predicted. Adjusted for the 1.1 percent inflation rate, the real wage increase is 1.9 percent. Canadian workers will meanwhile see salaries increase by 2.5 percent and with inflation at 1.6 percent, will experience real wage growth of 0.9 percent.

In Asia, salaries are forecast to increase by 6.1 percent – down 0.3 percent from last year and 0.7 percent from the year prior. Real wages are expected to rise by 4.3 percent – the highest globally. The largest real wage increases are forecast in Vietnam (7.2 percent), Thailand (5.6 percent), Indonesia (4.9 percent) and India (4.8 percent). The biggest change in Asia is in China, where real wages increases are down nearly 2.5 percent, from 6.3 percent in 2016 to four percent in 2017 – reflecting lower growth predictions for the year ahead.

Despite the turmoil following the Brexit decision, the U.K. is faring fairly well, with predicted raises staying at 2.5 percent (the same as the last three years). Adjusted for inflation, real wages are to increase by 1.9 percent in 2017, which is slightly higher than the Western European average. Workers in France and Germany are forecast to see real wage rises of 1.5 percent and 2.2 percent respectively.

“Although not as high as last year when we saw a three-year high, there are still positive real wage gains across the globe,” said Benjamin Frost, Korn Ferry Hay Group global pay manager. “In addition to predicted salary increases, inflation is relatively low in most countries, which has a positive impact on real wages.”

Workers in Latin America are forecast to see the largest headline salary rises in 2017 at seven percent. However, due to high inflation in the region (5.9 percent), they are expected to see real wage increases of only 1.1 percent. In Colombia, workers can expect to see a 6.8 percent raise, but with an inflation rate of 7.6 percent, real wages will be down 0.8 percent. In Brazil, the expected salary increase is 8.8 percent, and with 8.4 percent inflation, the real increase is 0.4 percent.

2017 looks positive for workers in the Middle East. Despite plunging oil prices and economic and political turmoil throughout the region, salaries are forecast to rise by 4.5 percent. With inflation at two percent, real wages will rise 2.5 percent.

Although top-line salaries will increase 6.4 percent in Africa, high inflation means the real increase is only 0.7 percent. High inflation in Egypt means it is one of two countries in the region set to see a cut in real wages at -3.0 percent, which is worse than the year prior, at -0.4 percent. Algeria is the other nation in Africa to see negative real wage increases, at -1.1 percent.

“Asia continues to drive growth in wages globally as companies look set to increase pay across the board,” said Mr. Frost. “However, the global labor market is in flux as slower economic growth in mature economies keeps a check on pay rises. In emerging economies, upskilling workers is crucial for companies to maintain a competitive advantage – and those skilled employees can expect to see wages rise as talent shortages in certain regions drive salaries up.”

Other Studies With Similar Findings

According to a survey released by Willis Towers Watson, pay raises for U.S. employees are expected to hold steady at three percent in 2017. The survey also found that employers will continue to reward their best performers with significantly larger pay raises as they look for ways to retain their top talent and strengthen existing pay-for-performance cultures.

In addition, the Willis Towers Watson report found virtually all respondents (98 percent) plan to give employees raises next year, with salaries for exempt non-management employees to increase three percent. That’s the same increase they received in each of the past three years.

From the employee perspective, workers are confident looking ahead when it comes to the job market, job security and pay raises, according to Glassdoor’s ‘Employment Confidence Survey.’ Nearly half (46 percent) of U.S. employees expect a pay raise or cost-of-living increase in the next 12 months.

But workers still feel that they need to change jobs to get a decent pay raise. More than half of employees globally (56 percent) believe they must switch companies in order to make a meaningful change in their compensation, according to the ‘Global Salary Transparency Survey‘ released by Glassdoor.