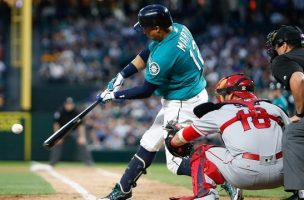 September 21, 2016 – As the baseball season winds down and teams look to restock their C-suite executives, Reffett Associates has just placed Trevor Gooby as vice president of ballpark operations for the Seattle Mariners. The search was conducted by managing partner Bill Reffett and executive recruiter Jennifer McCorey.

Mr. Gooby will be responsible for the overall operations strategy for Safeco Field, to include guest services, premium services, non-baseball events, event sales and marketing, engineering and maintenance, safety, security, grounds keeping, and housekeeping. Additionally, he will be responsible for all game day operations, and for insuring that the Club provides an exceptional game day experience for its guests. He will report to Mariners’ president Kevin Mather.

“When we evaluated Trevor’s outstanding career and experience, it was clear that he represented a great organizational fit,” said Mr. Reffett.  “He has worked with quality organizations who project the same kind of values that the Mariners embody.”

Mr. Gooby has almost 20 years of baseball operations experience, working first with the Los Angeles Dodgers, and most recently with the Pittsburgh Pirates. His responsibilities have spanned general management, operations, sales, communications, and international operations.

The Mariners recently retained Reffett Associates to lead the organization’s search for a new senior vice president of human resources, succeeding Marianne Short, who has announced her retirement. The Mariners are conducting a nationwide search for a senior executive who possesses experience in the entertainment, hospitality, and sports industries. Managing director, Marshall Reffett, of the firm’s Seattle office, is leading the search with assistance from Angel Rodriguez, a managing director in Dallas.

“Over the years, the Mariners have been a stellar participant in building a stronger, vibrant Seattle,” said Mr. Reffett. “As they make the transition to fully local ownership, we are pleased to have been selected by them to help establish the building blocks of a dynamic high-performing organization.”

Having owned the Seattle Mariners since 1992, the Nintendo Corporation announced last April its intention to sell its majority ownership stake to First Avenue Entertainment LLP. Nintendo retained a 10 percent ownership interest in the Mariners, and the remainder of the ownership was sold to the members of the new group. Mariners CEO Howard Lincoln was replaced by John Stanton, a former owner of the Seattle SuperSonics. Since 1999, their home ballpark has been Safeco Field.

Teaming Up With Search Firms

The Minnesota Twin retained the services of Korn Ferry to replace general manager Terry Ryan. The firm has a history of working with Major League Baseball, having placed Rob Manfred into the commissioner’s post. At the end of last season, MLB hired the executive search firm to provide league-wide talent support services, which includes assisting candidates who reach the interview process for baseball operations positions.

The Atlanta Braves organization turned to Millman Search Group to recruit a general manager for the mixed-use development property adjacent to SunTrust Park, home of the Braves. The complex will be the first-ever mixed-use community to open in tandem with a major league venue.