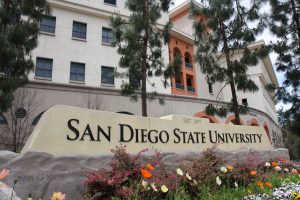 June 21, 2017 – Executive search firm R. William Funk & Associates has been selected by the California State University system to conduct the search for the next president of San Diego State University (SDSU). The search will be led by R. William Funk, president of the recruitment firm. He will be assisted by R. William “Willie” Funk III and Raquel Schmitz, associates with the firm. Chief of staff Krisha Creal will help with coordination.

SDSU president Elliot Hirshman, who has held the job since 2011, announced in March that he would be departing to accept the presidency at Stevenson University in Maryland. His tenure in San Diego ends on June 30.

The search for the school’s ninth president promises to be wide ranging and is expected to include candidates from outside of academia. “Chancellor Tim White has indicated that he and the board of trustees want the very best candidates possible and that individuals from both inside and outside the academy will be considered,” said the elder Mr. Funk.

Sally Roush, who had spent 31 years in various roles at SDSU, was named interim president until a permanent successor is selected. Among her roles, she was director of personnel services and senior vice president for business and financial affairs. She retired in 2013.

One of the major challenges that looms for the university is a decision on what to do about a stadium for its football team after the NFL’s San Diego Chargers depart for Los Angeles next year. Qualcomm Stadium, home of the Chargers and where the SDSU Aztecs have played since 1967, will be shuttered. The city and school have been struggling to decide how best to save the stadium for SDSU, a costly venture for the university. And though that issue will belong to Ms. Roush in the short term, it may ultimately become the next president’s problem.

On other fronts, Dr. Hirshman leaves the school in good standing, said Mr. Funk. During his tenure, SDSU moved up 37 places in the US News & World Report’s listing of top universities in the nation, to 146th, a tie with five other schools. It ranked 74th among public universities.

SDSU, founded in 1897, has a student enrollment of 35,000 and close to 300,000 living alumni. It boasts of a 74 percent six-year graduation rate. Its budget hovers around $900 million, including auxiliaries. The school recently completed a capital campaign that raised $800 million, far exceeding the $750 million goal.

“The next president will inherit an institution that is on an upward trajectory and has done well in recent years,” said Mr. Funk. “Applications for admission are at record levels, and the university continues to have a very vibrant research profile. We truly feel we have an outstanding leadership opportunity to offer to prospective candidates. And, of course, recruiting to San Diego and its associated quality of life makes our job easier.”

The new president is expected to be in place for the beginning of the 2018-19 academic year.

Mr. Funk said he and his colleagues are in the early stages of their work. “We are still getting to know the university and this process will continue when we meet with the campus constituents who will share their insights with us and the search committee when they return from summer break,” he said. “We do know that SDSU is one of the most diverse campuses in the country and its new leader is expected to be committed to diversity and inclusion. And, like all public institution presidents, the new leader will have to strategically consider how to do more with less in a difficult funding environment.”

William Funk & Associates is an executive search firm specializing in higher education executive recruitment. The firm, located in Dallas, TX, has conducted more than 400 searches for university and college presidents and chancellors over the last 35 years. It just recently placed Steven Leath as its 19th president of Auburn University.