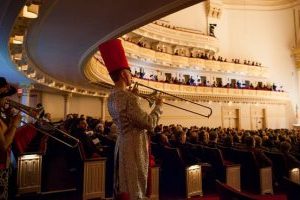 December 8, 2016 – Executive search firm Isaacson, Miller has been retained by The Juilliard School to lead the search for its seventh president. For the last 32 years, Joseph Polisi has served as the organization’s president. The school hopes to have a new leader in place by next summer. Isaacson, Miller chairman John Isaacson is leading the search with vice president Sheryl Ash and associate Cortney Tunis.

The president post at Juilliard reports to the organization’s board of trustees, serves as a member of the board, and works closely with its senior leadership team. The next president will inherit a talented and committed team of artistic, academic, and administrative leaders, and will be expected to put in place the administrative systems and structures that will best support high level thinking, and better leverage Juilliard’s many assets.

The new leader will encourage collaboration among the school’s senior leadership and will ensure a stable and productive relationship with Lincoln Center and other partners in the Lincoln Center Community. He or she must bring an understanding of the evolution of the arts marketplace. The prevailing wisdom in arts education has been that the audience for the arts is shrinking; an alternative view is that artistic experience is now more distributed. The next president of Juilliard, according to the position specification, will imagine ways to educate students for a new world of opportunities, “one in which the arts paradigm is shifting, and will weave the thread of excellence into that vision.”

A Visionary Leader Is Sought

The right candidate will have a deep respect for the traditions that have shaped Juilliard coupled with a vision for its future. Soft skills include “approachability,” “compassion,” and “a palpable enthusiasm for, and understanding of, the work of Juilliard’s students and faculty across art forms.”

“Juilliard seeks a sophisticated and inspiring leader, warm and genuine with exacting standards, with a vision for what arts education can and should be in the 21st century and a willingness to take calculated risks to achieve great ends,” said Mr. Isaacson. “The new leader must have a profound artistic sensibility and sensitivity. An understanding of excellence in the arts, and a personal commitment to the importance of the arts in society.”

In addition to a passion for the performing arts and appropriate administrative/management experience, “the successful candidate will be an enterprising leader who puts student success and well-being above all else, and deeply values Juilliard’s transformational impact on young aspiring artists and performing arts audiences around the globe,” added Ms. Ash.

“It is a very broad search,” said Mr. Isaacson. “Candidates could come from any number of leadership roles, most likely in education or the arts, but also potentially in other fields if the candidate meets the qualifications above.”

Juilliard was founded in the early 20th century in New York City. It became one of the best performing arts academies in the country and in the world. Today, the school enrolls 499 undergraduate and 359 graduate students in a variety of degree and diploma programs in the performing arts. Juilliard is a highly selective institution, admitting only seven percent of its applicants this year.

A Specialist In Identifying Transformational Leaders

A nationally recognized search firm focused on recruiting transformational leaders for mission-driven organizations, Isaacson, Miller has conducted some 5,600 placements over 34 years. This year the firm was recognized as one of the top 50 search firms in the Americas by Hunt Scanlon Media.

More than half of the search firm’s historical placements, some 2,800 assignments, have been in the academic sector, consisting of university presidents, college chancellors and deans. It has filled top leadership posts at Wellesley College, Washington State University, Miami University, Howard University, Bowdoin College, Dartmouth, NYU, Virginia State University, and the University of North Carolina, among a host of others. Just recently, the firm placed Vincent Edward Price as the 10th president of Duke University. Mr. Price, an academic who is widely known for embracing diversity, served as provost of the University of Pennsylvania. Mr. Isaacson also led that search along with vice president Jane Gruenebaum and vice president John Muckle. Over the past five years, Isaacson, Miller has filled a number of other important leadership posts at Duke, including provost; president of the Duke University Health System; dean of the Nicholas School of the Environment; dean of its School of Medicine; and dean of Trinity College of Arts & Sciences.

“The market for executive search in universities and colleges has expanded dramatically over the last 25 years,” said Isaacson, Miller president Vivian Brocard. The market expansion is a direct result of increased pressure on the economic model in higher education, she said.

“That pressure comes not only from competition, but also from reduced state funding, rising pressures on tuition, escalating student debt, and decreasing federal research funding.” All this, while the importance of leadership escalates steadily. “As a result,” said Ms. Brocard, “universities use every method available to reduce the risk of failure and increase the likelihood of success; hence, the dramatic rise in the use of search.”

Check Out These Related Articles On Searches for Music and Arts Organizations: