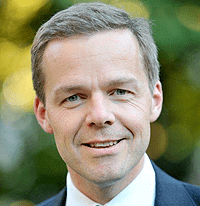 May 11, 2016 – Heidrick & Struggles has named Sylvain Dhenin (pictured) as head of Continental Europe for its global CEO and board practice. He is based in the firm’s Zurich office and will report to Bonnie Gwin and Jeff Sanders, CEO practice group co-managing partners. Mr. Dhenin will continue in his leadership role as managing partner of Western Europe.

Mr. Dhenin joined Heidrick last year. Previously, he was vice chairman of CTPartners, where he served as head of its European, Middle East and Asia Pacific operations. While there, he led a significant expansion of the firm’s Europe business. Mr. Dhenin also served as managing partner of Whitehead Mann, leading its operations in France. He began his career at Danone, the multinational food products company.

Over the course of his career, Mr. Dhenin has recruited CEOs, C-suite executives and non-executive directors for some of the world’s leading companies. He has extensive experience in a broad range of industries, including industrial, financial services, pharmaceutical, technology, media & telecommunications, professional services and private equity.

“Talent is the No. 1 concern facing CEOs and boards today. They need a global advisor who can triangulate performance, risk and opportunity,” said Ms. Gwin. “Europe is an important region for our firm and Sylvain is a natural leader to accelerate our C-level presence in the market. He has a track record of success in the region and globally in building relationships that support long-term client growth and impact,” said Mr. Sanders.

Ms. Gwin and Mr. Sanders were recently appointed co-managing partners of Heidrick’s global CEO & board practice. Based in New York, Ms. Gwin previously served as managing partner of the firm’s board practice in North America where she focused on succession planning and searches for both directors and CEOs across a wide range of industries. Mr. Sanders, who joined Heidrick in 1997, is co-located in the New York and San Francisco offices of the firm and has led its North American CEO practice for the past eight years.

Heidrick’s CEO & board practice has recently filled some high profile positions for a number of leading companies, including:

Check Out These Related Articles On Search Firms Bulking Up Their CEO Practices: