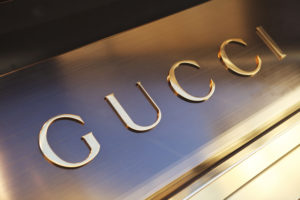 August 1, 2019 – To meet the needs of an increasingly diverse society, many organizations have developed executive positions to guide their diversity agendas. Chief diversity officers have responsibility for guiding efforts to conceptualize, define, assess, nurture and cultivate diversity. Duties may include affirmative action and equal employment opportunity, or the constituent needs of minorities, women and other social identity groups.

Surprisingly, just 20 percent of Fortune 500 companies now employ diversity officers. But according to executive search consultants who specialize in recruiting them, there is an intense hunt underway as more and more top companies seek these key C-suite leaders. 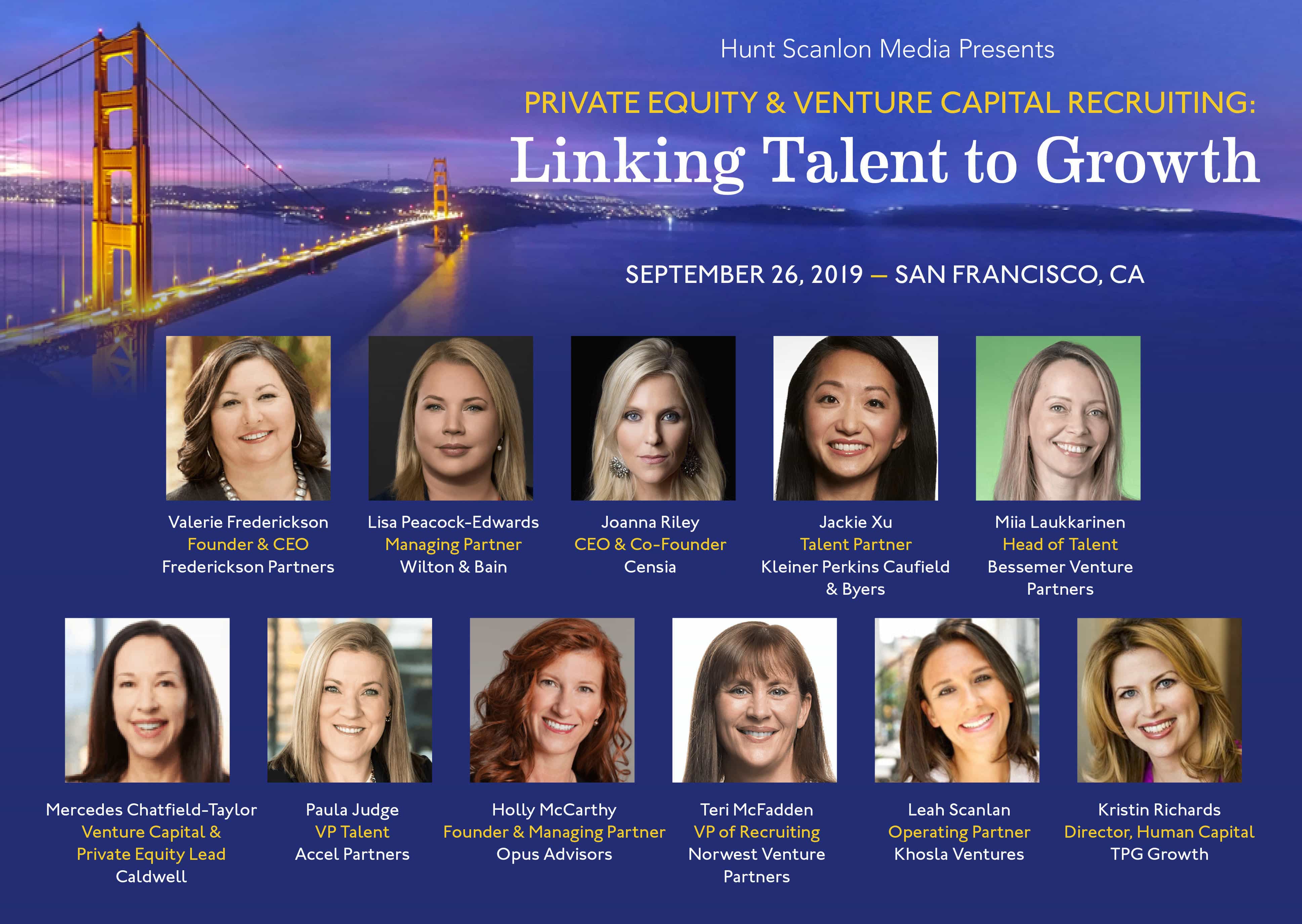 For private equity and venture capital firms and their talent solutions partners, properly allocating talent is as important as allocating capital. Talent is the oil that runs the machine – and more often than not it is through the lens of human capital where transformational change takes place.

For these Top 10 Women Talent Leaders, diverse and inclusive leadership starts at the top and permeates every layer of the workplace.

Sign up & come meet them in person! We are selling out soon!

Recently, executive search firm Hanold Associates recruited Renée Tirado as the new global head of diversity, equity and inclusion at Gucci. Neela Seenandan and Jason Hanold, co-CEOs and co-managing partners, led the assignment. Hunt Scanlon Media first reported the onset of the search in March, as the hunt for diversity chiefs intensified this past spring.

“We had a very collaborative, determined and decisive client in Gucci,” said Mr. Hanold. “We were able to offer candidates the option of starting in either Milan or New York, and the opportunity for global impact was very attractive to a strong slate of contenders. Gucci’s leadership played a hands-on role in helping to drive the search through their transparency and authenticity.”

At the start of the year, Gucci announced its intention to invest $10 million to promote diversity via a variety of initiatives, and that it was keen to overhaul its corporate culture on the issue. This followed the company igniting a worldwide uproar for selling a sweater that many said resembled blackface because of its design.

“Since 2015, [Gucci creative director] Alessandro [Michele] and I have worked to put culture — self-expression and inclusivity — at the center of what we do,” said Marco Bizzarri, CEO of Gucci. “This appointment is a fundamental building block to further our commitment and support the initiatives already in place. As a learning organization, we have challenged ourselves over the last few months to accelerate our vision to develop a strong organization. I am confident that Renée will help us create the meaningful change we want to see not only in our company but in the fashion industry. Renée believes that diversity and equity should be a daily way of being.”

In her new role, Ms. Tirado will devise, develop and deploy a global strategy to advocate inclusion and equity within the company, while increasing the diversity of its workforce, in close connection with Gucci’s initiatives.

“I am honored to join a company that puts these non-negotiable values at the forefront of their business model, not as ‘a nice to have’ but as a key component of its business strategy,” said Ms. Tirado.

“There is strong demand for these types of leaders,” said Mr. Hanold. His firm has just taken on the search to find an SVP of diversity, inclusion and social responsibility for MGM Resorts International. MGM is the largest employer in Nevada and a global force in entertainment and gaming. 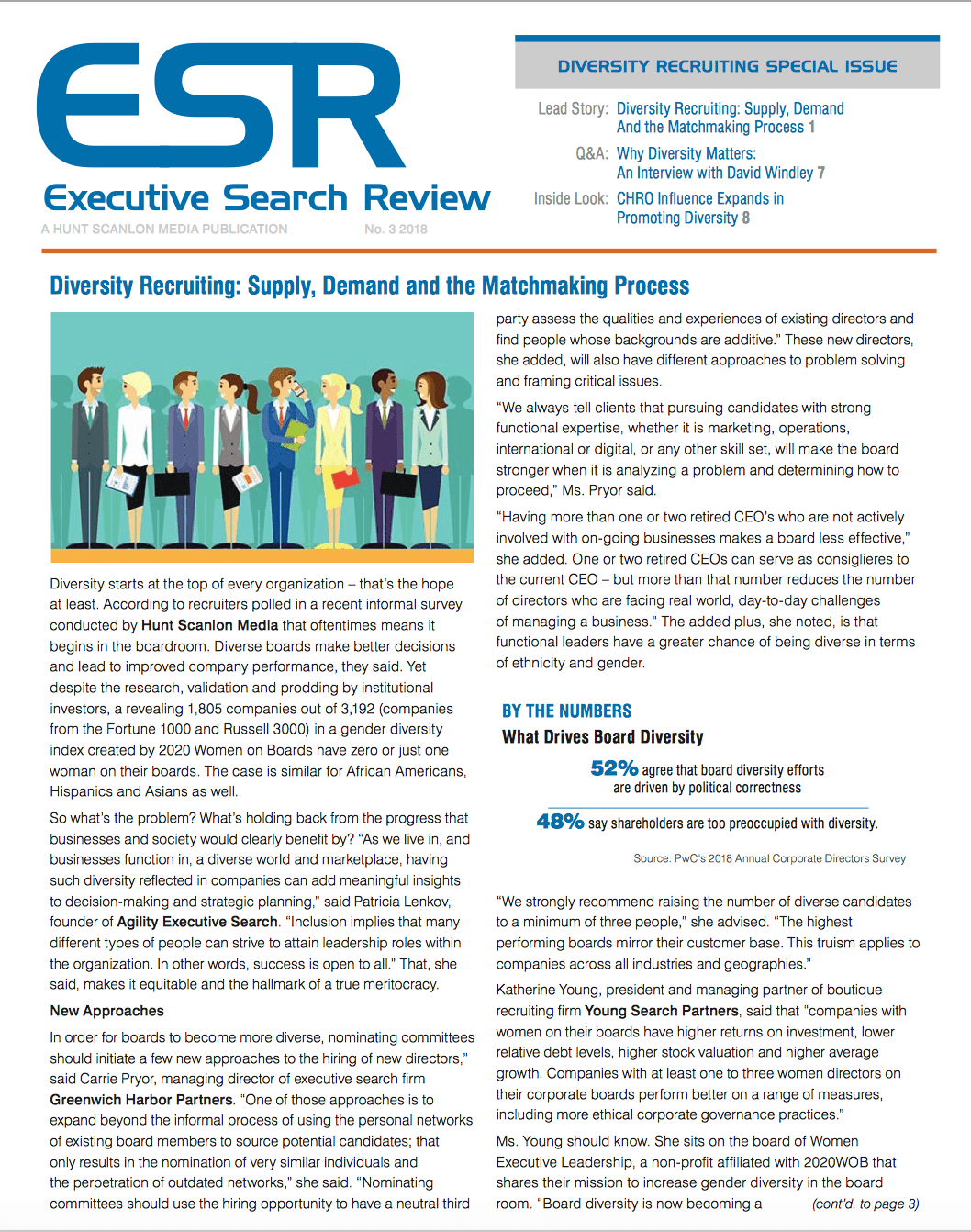 Hunt Scanlon Media recently released its latest issue of ESR. This time around, an in-depth look at diversity recruiting – what drives it, why it’s not a social crusade, and how it matters in every workplace. According to the newsletter, diversity starts at the top – and that oftentimes means it begins in the boardroom. Diverse boards make better decisions and lead to improved company performance. But boards are failing to reflect society as a whole. What’s the problem? Hunt Scanlon Media offers some answers.

As you might expect, building cultures that will not tolerate discrimination but instead promote diversity – and recruiting talent that reflects this – is the challenge facing every recruiter and talent acquisition leader today. The #MeToo movement is, of course, leaving its mark on recruiting – and in this issue that is examined as well. Five incoming chief diversity officers making a big difference by putting a special emphasis on diversity are also highlighted. Get the free issue now!

Ms. Seenandan is focused on leading senior-level professional services and HR leadership assignments at Hanold. She joined the firm from Nielsen where she was senior vice president of human resources responsible for the North America consumer. She was responsible for driving the strategic talent agenda including recruiting, compensation, talent management, and diversity and inclusion.

Mr. Hanold founded his search firm in 2010. Previously, he served as a managing director with Russell Reynolds Associates, where he led the firm’s global human resources officer practice and was a member of the board of directors and CEO practices. Before that he held talent and recruiting positions with Whirlpool, McKinsey & Company, Deloitte and State Farm.

Establish a Diversity Baseline and the Money Will Follow Why is There No Room for Hispanics On Corporate Boards? Path to Profitability: The Business Case for Board Diversity Women Gaining Top Jobs at Elite Recruiting Firms