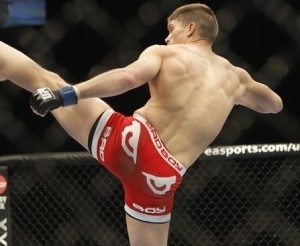 December 4, 2015 – Executive search firm Hanold Associates has been selected by the Ultimate Fighting Championship (UFC) organization to lead its search for a new chief human resources officer (CHRO). The position will be based at UFC headquarters in Las Vegas. CEO Jason Hanold and partner Michael Leming are leading the search.

Mr. Leming recently joined forces with Hanold Associates from Nike where over the past 15 years he led the recruiting efforts at the most senior levels of the organization holding the title of chief talent scout. Mr. Leming is based out of Hanold’s Portland office.

At UFC, the CHRO position is newly created and will be an important member of UFC’s leadership team with a vision for prioritizing people as a crucial strategy for market growth and differentiation. The CHRO will be accountable for leadership and management of the talent strategies and HR function at the company in alignment with the long-range vision and goals for the entire organization.

“Demand remains strong, especially in mid-market, but different companies are looking for folks from varied backgrounds depending on their business scenario,” said Mr. Hanold. “A significant number of these chief HR officer searches reflect newly created roles, where a company often times already is well-branded, such as with Patagonia and UFC, but is ready to build sophistication into their talent practices while scaling and shaping their organizational culture.”

Started in 1993 as a professional mixed martial arts (MMA) organization, the Ultimate Fighting Championship (UFC) is now the fastest growing sports organization in the world. It produces more than 40 live events annually and is now the largest pay-per-view event provider in the world, broadcast in over 100 countries to nearly 800 million TV households worldwide in 28 different languages.

Headquartered in Chicago, Hanold Associates is a boutique search firm specializing in HR officer assignments and serving a wide-ranging list of clients, including Nike, Amazon, McKinsey & Co., eBay, Fossil, Carnival Corporation, Outward Bound and Vail Resorts. The firm has been recognized as one of America’s fastest growing private companies by Inc. Magazine, posting a 253 percent growth rate over the past three years.

According to a report released by Aon Hewitt, more than half of CHROs say they are not career HR professionals. Of these, approximately one third had no background in HR prior to assuming their current CHRO position.

“More CHRO positions are opening up to those who have not previously served as the senior-most HR leader, which is terrific news for our HR function which has had infusion distinctive talent join in the past decade,” said Mr. Hanold.

“Today’s CHROs face an enormous challenge. As catalysts for change, their goal is to evolve companies away from hierarchical command & control models toward more collaborative models that drive innovation, engagement and customer service,” said Mark Oppenheimer, managing partner for the Americas at Marlin Hawk and a noted CHRO expert.