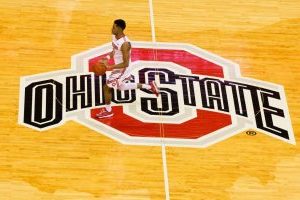 The Buckeyes, however, clearly felt it was time to go in a new direction. “While this may have been a surprise to many, it’s the right thing for our program at this time,” said Ohio State athletic director Gene Smith, who noted that a coaching change was necessary. While in Chicago for Big Ten meetings, Mr. Smith spoke to Ohio State president Michael Drake and secured permission to use the funds necessary to attract the coaching candidates he wanted.

Mr. Holtmann has been with Butler University for four seasons, the last three as head coach during which he had a 70-31 record. The Bulldogs reached the NCAA tournament in each of his three seasons in charge, winning 25 games and advancing to the Sweet 16 last season. Before Butler, Mr. Holtmann spent three seasons as the coach at Gardner-Webb.

“Chris is a tremendous basketball coach, but more importantly, he is a great man who has led our program well and embodied the Butler Way during his time with us,” said Barry Collier, athletic director at Butler.

“When we met with our student-athletes on the team we promised them we would work hard to get this right,” said Mr. Smith. “As we vetted the background of candidates, Chris Holtmann’s name continued to surface. He emerged as our No. 1 candidate. Chris is focused on academics, is a high-integrity person, a relentless recruiter with Midwestern ties and a proven winner.”

Mr. Holtmann, for his part, said he found it difficult to resist the impassioned Buckeye fans. “A passionate fan base that absolutely loves and craves a winner. That combination was simply too hard to pass up,” said Mr. Holtmann. “We’re going to be really aggressive and passionate as a staff about adding Ohio State guys to this program. I’ve recruited Ohio for over 20 years and it has outstanding players and coaching. It will be paramount to our success.”

Fogler Consulting was established in 2006 by Eddie Fogler, a former National Coach of the Year with 30 years of Division I coaching experience. Since then, universities and colleges have turned to him for insight into the world of collegiate basketball coaching, and for top talent. Since launching his business, Mr. Fogler has placed more than 30 college coaches across the nation at all levels of Division I basketball in an unusual search specialty that seems to have high growth potential.

A review of just some of Fogler Consulting’s clients reads like a Who’s Who of leading American colleges and universities: Vanderbilt, Boston College, Texas Tech, Rutgers, Penn State, Georgia Tech, Michigan, Auburn and South Carolina, just to name a few.

Korn Ferry landed Patrick Ewing as the head basketball coach for Georgetown University. Mr. Ewing comes back to his alma mater after serving for 15 years as an assistant head coach in the NBA. Korn Ferry’s sports practice is led by Jed Hughes, who has distinguished himself as an expert in identifying, assessing, and developing leaders for sports organizations.

DHR International recruited Jeff Brohm as head football coach for Purdue. He becomes the 36th head coach in program history. The search was led by DHR managing partner and global sports practice leader Glenn Sugiyama. DHR’s sports practice is a global specialty for the firm with capabilities that serve clients in six continents across all sports-related organizations.