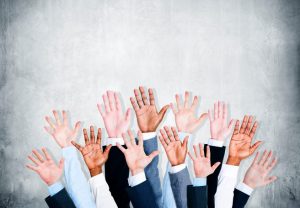 May 26, 2016 – Across the executive ranks, five times more men than women were appointed to new positions, according to a just released report issued by TRANSEARCH International. The landmark study, which looked at more than 3,000 C-level appointments representing 10 industry groups across North America, found that only one fourth of newly appointed senior level executives were diverse candidates. Executive recruiters asked about the findings by Hunt Scanlon Media said they were perplexed, as all of them reported including diverse candidate slates for executive level assignments as almost an afterthought.

Among newly appointed executives who were diverse candidates, more than two thirds were hired from outside the organization. Diverse candidates also had a greater likelihood of being hired rather than promoted, when compared to an executive in the overall population.

The study also found that across all executive positions, the CEO and CFO roles exhibited the lowest ratio of diverse appointments. Here’s a closer look at some of the findings:

Similarly, only one fifth of newly appointed CFOs were diverse candidates. The CFO position nearly matched the CEO’s low ratio of female appointments. Across all executive positions, the CFO role exhibited the lowest ratio of newly appointed executives who were racially or ethnically diverse. This could be the result of what CFO Magazine reported recently — that nearly 50 percent of organizations consider diversity ‘no bigger a concern’ now than it was six years ago. Of course, a function dominated by white men might think along those lines.

Nearly one third of newly appointed CIOs were diverse candidates, a higher ratio than with CEOs and CFOs. But across all industries, nearly five times more men than women were appointed CIO. Across all executive positions, the CIO role exhibited the highest ratio of newly appointed executives who were racially or ethnically diverse. Mid-sized organizations tended to have a lower ratio of diverse executives than did larger and smaller organizations.

Just less than half of newly appointed CMOs were diverse candidates, one of the highest ratios of diverse appointments across all executive positions. Along with HR (see below), the CMO position exhibited one of the highest ratios of newly appointed female executives. Despite strong overall diversity numbers, not quite one of five newly appointed CMOs were racially or ethnically diverse. When it came to the CMO, larger organizations tended to have a higher ratio of racially or ethnically diverse executives than did mid-sized and smaller organizations. 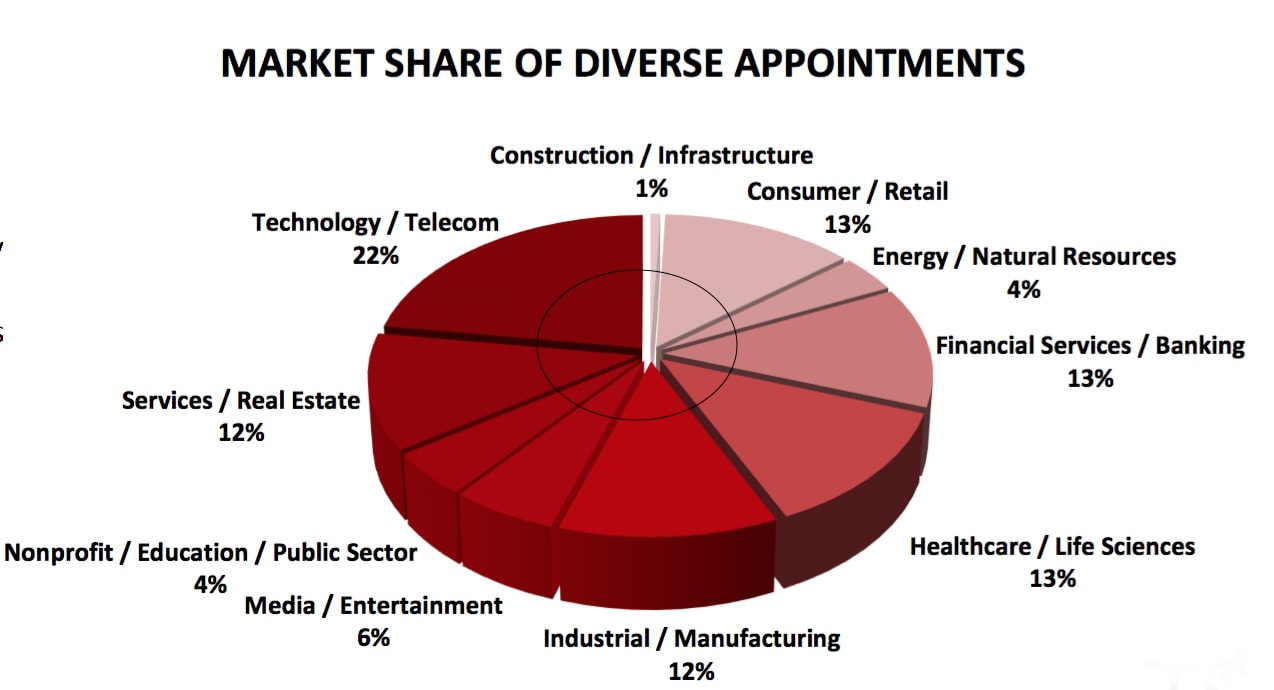 “The spirit of this research and its report is to add new perspective to an important conversation that’s already well underway in boardrooms and workplaces throughout America,” said Mike Morrow, managing director with TRANSEARCH. “We hope the research contributes to a stronger dialogue around building well-balanced teams and successful enterprises.”

After Silicon Valley released data about its diversity employment, partners at TRANSEARCH wondered about the diversity mix of executives across corporate America, said Steve Tennessen, a director with TRANSEARCH. “We also wanted to examine various C-suite positions in a way we had not seen before. We hope this report motivates organizations to look through a different lens at their track record of appointing diverse executives, and how change may influence their business.”

An approach to diversity that fits one organization may not fit another, said Mr. Morrow. “Many organizations have sought to increase their mix of diversity employment by implementing mentorship programs – with sponsors in the C-suite – that recruit, develop and retain minority employees.” Others, he added, have cultivated formal alliances with networking associations, professional advocacy groups, and related non-profits.

A Look at Diversity Metrics In Global Banking

According to the firm’s research, it is becomingly increasingly apparent that banks across the market are now taking very active steps to improve diversity across all of their senior executive levels.

Diversity reporting has shifted up a gear at the world’s biggest banks, with two thirds (65 percent) of the top 20 banks now measuring how diverse their workforce is in their annual reports, according to DHR’s research.

DHR reported that shareholders and other stakeholders are increasingly keen to see information on diversity included within annual reports. The search firm found that only 20 percent of the annual reports analyzed did not mention diversity at all. Its findings show how seriously most global banks are now taking diversity as a means of improving recruitment and retention through inclusivity, creating a more representative and well-balanced workforce, fostering greater innovation and ultimately helping to boost corporate performance.

“The depth of information provided tends to be far greater in Europe – most likely due to intense political pressure to redress gender imbalances in the boardroom increasing the focus on diversity generally,” said Stéphane Rambosson, managing partner of the European financial services practice at DHR. “This doesn’t mean that U.S. and Canadian banks are necessarily any less committed to diversity than their European cousins – more that policies and progress are just not being communicated to the same degree.”

DHR’s analysis reveals that more than half (55 percent) of the banks studied measured the number or proportion of women occupying senior positions (director level and upwards) in their annual reports, with over a third (35 percent) comparing it to previous years’ levels.

“Addressing diversity is no longer optional for world leading businesses. In the global banking sector, diversity reporting is rapidly becoming the norm,” said Mr. Rambosson. For  stakeholders, he said, this is not about buzzwords and box ticking: shareholders — as well as policymakers, the media, customers and staff — do expect to see a lack of diversity being tackled.

“Reporting on diversity as a metric, as opposed to actually hiring diverse senior level and C-suite executives, are two entirely different things,” said Scott A. Scanlon, founding chairman and CEO of Hunt Scanlon Media. “How and when companies align their diversity metrics with their actual hiring demographic is what we all need to be focused on. Otherwise, it’s just more lip service.”

Why is There No Room for Hispanics On Corporate Boards? Path to Profitability: The Business Case for Board Diversity Women Gaining Top Jobs at Elite Recruiting Firms Carrington & Carrington Recruits Chief Diversity Officer for UPMC Global Boards Step Up Efforts to Broaden Roles for Women Search Firm Launched to Serve Black Colleges Empowering Female Leaders One Country at a Time Why Women Matter In the Talent Game Nordic Countries Outpace Global Regions for Female Directors Women Static In Workforce But Gain As Top Talent Advisors Are We Approaching a ‘Tipping Point’ In Gender Leadership Equality? Boards Seek Diversity With Help of Executive Recruiters