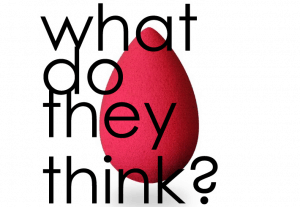 Institutional investors and shareholder activists are also playing a more powerful role shaping corporate governance. But no one more than board directors have to keep up with all of these changes in order to be effective at governing.

PwC’s just-released 2016 ‘Annual Corporate Directors’ survey uncovered 10 key findings that have a major impact on how boards perform. Let’s take a closer look at the findings:

Sitting on a board of directors requires preparation, attention to detail, and having the right skills for the job. But more directors are saying someone on their board should be replaced — a sentiment that directors have had since 2012. The most common reasons why: they’re not prepared for meetings and they lack the right expertise. Some directors also cite aging as the reason, while others say someone is overstepping the boundaries of his or her oversight role.

So what can boards do to right the ship? Self-evaluations are one tool boards can use to rethink their board composition and address a director’s poor performance. But 51 percent of directors say their boards didn’t make any changes as a result of their last self-evaluation process.

Most board members don’t look far beyond the boardroom for new directors. In most cases, they still turn to what they know: themselves. In fact, the most common source is fellow board member recommendations. This likely contributes to the “same old, same old” criticism that some observers have of boards, as well as concerns about a lack of board diversity.

Many, of course, use search firms and management recommendations as sources for recruiting efforts. But a shift is starting to happen. Calls for board diversity and investor influence on board composition have prompted some boards to use less traditional sources to find new directors.

Nearly all directors (96 percent) agree that diversity is important. But how important it is and how much it helps depends on whom you ask. Female directors have a much stronger opinion about the benefits of board diversity than male directors. 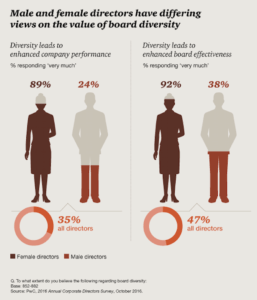 Women make up 20 percent of S&P 500 boards, up only five percentage points in a decade, according to the Spencer Stuart Board Index. The majority of directors today say anywhere from one fifth to one half of the board should be female. But 10 percent of directors—overwhelmingly male—believe that the optimal percentage should be what it is today or less. This seems to suggest that it may take much longer to reach gender parity on boards. 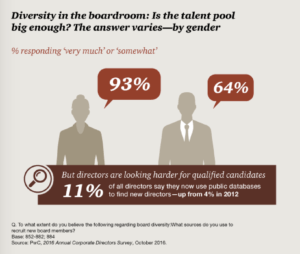 One of the main difficulties in adding diversity to the board is that many boards look to current or former CEOs as potential director candidates. But only four percent of S&P 500 CEOs are female, according to a poll by Catalyst, and only one percent of the Fortune 500 CEOs are African-American.

So where can boards find qualified diverse candidates? First, the pool of potential director candidates needs to expand. And then boards will have to look in different places. There are often many untapped, highly qualified, and diverse candidates a few steps below the C-suite—people who drive strategies, run large segments of the business, and function like CEOs.

But female directors think there are far more qualified diverse potential directors out there than male directors do. Still, boards are starting to use public databases in their talent search—an indication that they may be looking for diverse qualities in those new candidates.

For years, we have heard how overloaded directors were with their board work. That no longer seems to be the case. Directors aren’t concerned with their workload, according to the vast majority of respondents to the PwC survey. The same goes for committee work. But directors still spent an average of 248 hours on their board work in 2015.

CEO succession is arguably the most important responsibility of the board. The CEO develops the company’s strategy, drives execution, and sets the tone at the top. The board has oversight of all of this—and having the right person at the helm is critical. But not all boards prioritize CEO succession planning, and about half of directors say they want to spend more time on the topic. 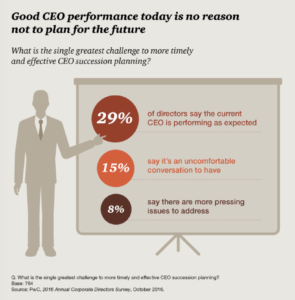 Directors say that the current CEO’s performance is the biggest challenge to more timely and effective CEO succession planning—the CEO’s good performance. But complacency with performance should not be a barrier to succession planning. In fact, the CEO turnover rate at the world’s largest 2,500 companies was 16.6 percent in 2015, the highest in 16 years, according to PwC’s ‘Strategy & CEO Success‘ study. While some of that turnover was planned or due to M&A activity, some of it wasn’t. Emergency situations happen—a family crisis, a scandal, illness, or even death—so companies and boards need to be prepared.

Direct engagement between boards and investors has become much more commonplace over the past few years. In fact, 54 percent of directors said their boards engage directly with their investors. And more directors are open to discussing topics that, just a few years ago, might have been off-limits—including board composition and company strategy. But not all directors think the engagement is useful—21 percent of directors said they didn’t receive any valuable insights from directly engaging with investors. Directors are also skeptical that engagement actually impacts investor behavior.

Companies face many challenges and disruptions in today’s changing business environment. So having a board made up of the right people with the right experience and expertise is critical. Many investors have become more vocal about who’s sitting in the boardroom. They want more information about a company’s director nominees, and they want boards to think about tenure and diversity. Directors have paid attention, and many have changed their board composition as a result.

A company’s capital allocation plan gets to the very center of the long- versus short-term investment debate. And most investors agree that companies need to have a balanced capital allocation plan. But when the $170 billion of activist assets under management combines with the more $1.4 trillion in cash on companies’ balance sheets, the picture changes. Companies sitting on excess cash often find themselves a target of activism—with activists pushing them to return that cash to shareholders. Other investors are also starting to voice opinions about how companies use their resources.

No company is immune to shareholder activism. Some activists go after companies with financial performance vulnerabilities, such as missing quarterly numbers, a stagnant stock price, or comparatively weak revenue growth. Others might target the board’s corporate governance issues. While many companies look for strategies to stay out of activists’ cross hairs, they may not be able to stay under their radar. As of September 2016, there were 263 activist campaigns in the U.S. Some critics charge that activists are too focused on short-term results, and 96 percent of directors agree. Even so, many directors concede that shareholder activism can ultimately be good for business, compelling companies to evaluate strategy and improve capital allocation.

Boards are also responding to the threat of shareholder activism. About half of directors said their board regularly communicated with the company’s biggest investors and used a stock-monitoring service to get updates on ownership changes. Actively engaging with investors and understanding who owns the company’s stock can help companies and boards stay a step ahead of activists.

Check Out These Related Articles On Search Firms Filling Board Positions: