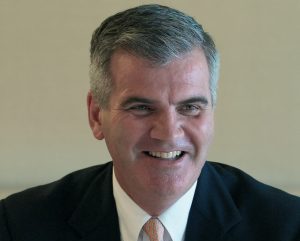 June 17, 2016 – Scrutiny on CEO succession has reached a new intensity. Combine regulatory and activist pressure for more detailed – and better disclosed – succession plans with a handful of high profile CEO illnesses, and you’ve got a recipe for deeper and deeper dives into how new CEOs are selected.

In a disrupted business environment, the notion of “what the next CEO should look like” is less straightforward than ever before – further complicating companies’ efforts. Recently, we spoke to George Davis, head of the CEO practice at leadership advisory firm Egon Zehnder, to delve into how his clients are tackling this challenge.

In the following interview, George discusses emerging themes in the CEO succession space, and how the role itself is evolving in increasingly complex and uncertain conditions. George lays out key concerns facing boards as they plan for CEO transitions in scenarios including succession planning & internal candidate development, external search, and crisis or interim succession. He identifies pitfalls for organizations – where succession can go wrong – as well as detailing how smart organizations are using strategic succession as a competitive advantage.

George Davis has been with Egon Zehnder for more than 20 years. He leads the firm’s global CEO practice, specializing in CEO search and succession. George previously led the global board practice, advising boards on board effectiveness, director succession and searches for board members, non-executive chairs, and chief executive officers.

You would be shocked how many aren’t. Recent research tells us that only one in 50 companies discloses any real detail about their succession processes – which leads us to believe that while many companies are ‘ticking the box’ and nominally putting a succession plan in place, many of those plans are not robust. They may not be continually refreshed, for instance, or they may not take into account emergency situations.

How is CEO succession changing in today’s disrupted world?

Let’s start with the most basic piece of the puzzle – companies increasingly need to look for a different kind of CEO. With Millennials now poised to make up a majority of the workforce at companies in fields as diverse as consumer packaged goods, public accounting and car rentals, their desire to work in organizations that can offer them a sense of purpose, integrity, and engagement – “PIE” – necessitates a new breed of chief executives. The next generation of CEOs will have to be more of a ‘servant leader’ in a more distributed leadership model, vs. the top down, ‘command and control’ CEO leadership model of old, in order to lead a workforce that studies tell us want to be coached, not directed. Finding this kind of leader requires a very different sort of process than what might have gone on even a few years ago. Companies need to dive far deeper into CEO candidates’ ability to stand at the helm of company cultures that are going to change very fast. Beyond current culture fit, which is still very important, they will need to take a deep look at candidates’ level of engagement – the ability to understand, and work with, the deepest motivations of others. 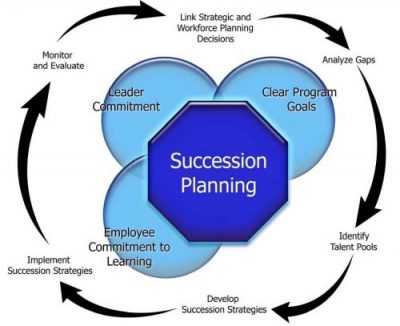 Where do you see CEO succession planning go wrong? What are some of the major pitfalls you’ve come across?

Managing the reactions – and indeed, the emotions – of internal candidates is of extraordinary importance. In the days of working for one company for decades and receiving a gold watch when you retired, you didn’t have to worry about internal candidates being disappointed and leaving if they were not selected, or not selected fast enough. Today, executive talent markets are such that you have to go into succession planning explicitly thinking about the retention of internal candidates. The good news is, this entails thoughtful development strategies which are of huge value to the organization across the board. Confidentiality and general communications management can be another challenge. Companies can’t afford to spook or confuse key stakeholders, but at the same time they are increasingly focused on understanding how their internal candidates stack up to the external market. Getting the information they need to make crucial decisions – without ‘letting the cat out of the bag,’ so to speak – is a tightrope that companies are walking with care.

What are the real hot button issues for companies embarking on CEO succession planning today? What’s keeping boards up at night?

The disrupted environment has put more pressure on the same issue that boards have always faced: How do we know we’re making the right decision? CEO choices are higher risk / higher reward than ever before. In a world of global mobility, increasingly fluid moves between converging industries, and more sophisticated internal development programs, organizations feel in some ways they have a broader range of choice than ever before. But the downside of this is uncertainty that the new CEO can lead them through a more and more uncertain future. To mitigate this risk, boards are demanding more sophisticated market benchmarking, and more in-depth assessments, including assessing a leader’s future potential, in addition to leadership competencies and past experience. 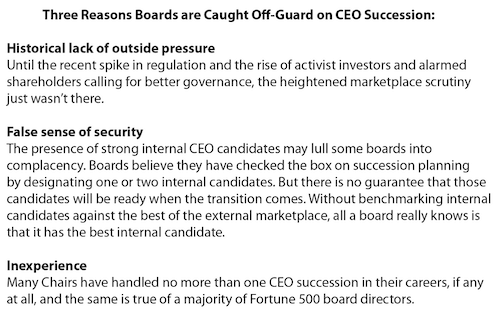 Your clients who approach the CEO succession process intelligently – what are they doing right?

It’s simple stuff, really. They are starting earlier and earlier, and engaging more deeply. They are asking themselves searching questions about what scenarios might be possible, instead of putting all their chips on one potential future. They are looking at their internal candidates more holistically, with reference to peers outside and a strong emphasis on development, so they don’t feel anxiety on the cusp of appointing someone. And finally, they are delving into the essence of their candidates, and looking beyond just the wins someone has chalked up. They want to see curiosity, determination and resilience. They know the days ahead are challenging.