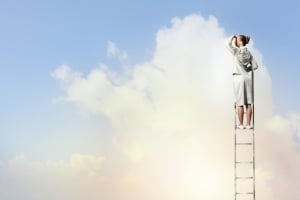 August 15, 2016 – The percentage of women in most C-suite positions is dramatically lower than their male counterparts, according to a new look at data of U.S. companies by Korn Ferry.

The study found that across all of the C-suite positions, the most senior post is held by the smallest percentage of women, with only five percent serving as CEO. This percentage remains flat from 2015.

Less than one percent of CEOs in the life sciences industry are women. (This excludes some healthcare providers and hospital systems, which are often non-profit organizations that may not publicly disclose financial information). The highest percentage of female CEOs are in the consumer industry (nine percent), followed by energy (six percent), financial and technology (both five percent), industrial (four percent) and life sciences (less than one percent).

“Study after study shows that diverse senior teams provide better corporate results,” said Peggy Hazard, managing principal at Korn Ferry. “Having more women at the top is a priority for our clients. However, the needle is not moving as quickly as any of us would like to see.”

Just 12 percent of CFOs across industries are women. The industry with the most is the consumer sector at 15 percent. Those industries tied for having the least female CFOs are financial and life sciences at nine percent.

“While the percentage of female CFOs is still small and more progress is needed, fortunately, interest in promoting and recruiting women into the role of CFO continues to rise,” said Bryan Proctor, Korn Ferry global financial officer practice leader. “A common barrier of female advancement to the top spot continues to be a lack of critical opportunities to demonstrate leadership, such as international assignments and operational roles. While the organization is responsible for offering these career-advancing assignments and opportunities to high potential females, we have found that qualified women who proactively seek out these roles and experiences are increasingly being recognized and rewarded.”

The CIO role fares only a bit better than the CFO role, with 19 percent of women holding the CIO seat across all industries.

“Having gender equality in the CIO role is already top of mind for CEOs and boards. We expect this focus to continue for years to come as the CIO creates greater strategic impact across organizations,” said Craig Stephenson, Korn Ferry managing director, North America CIO practice. “We are working with clients to change their view from focusing on just the CIO to the entire technology function to facilitate broader cultural evolution. We believe this achieves a higher percentage of women across the function and an accepting culture to ensure organizations retain and attract the best talent. There is a significant opportunity for women who are successful technology leaders to create even greater impact in an organization, in the role of CIO and in the boardroom.”

While the percentages are higher than the CEO, CFO and CIO, less than a third (29 percent) of CMOs are women.

“The marketing field is facing a conundrum. In more junior positions, there is a level playing field between men and women, but the percentages of women plummet at the highest levels in the function,” said Caren Fleit, Korn Ferry senior client partner and leader, global marketing center of expertise. “Organizations need to create an environment to not only attract, but retain these high-potential female professionals. That includes mentorship programs, flexible working environments and clear paths for advancement.”

The CHRO role is the only C-suite post where there is gender parity, with 55 percent of CHROs across industries being women.

“In our research, we find that women rank higher on key competencies needed in the CHRO role such as collaboration and negotiation skills, the ability to balance multiple constituencies and an appreciation for the dynamics of the overall business,” said Joseph McCabe, vice chairman of Korn Ferry’s global human resources practice. “Interestingly other Korn Ferry research shows a distinct correlation between CEO and CHRO competencies, but women are still not making it to the very top spot at the rate they should.” 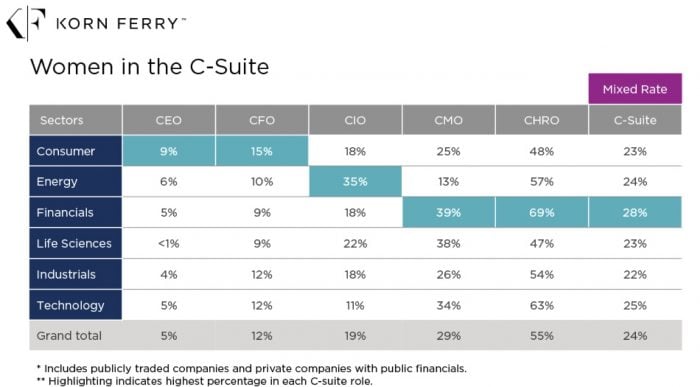 When considering the percentage of C-suite women by industry, the financial sector comes in the highest, at 28 percent, followed by technology (25 percent), energy (24 percent) consumer and life sciences (tied at 23 percent) and industrial (22 percent).

“In every industry we analyzed, there’s a tremendous need for improvement to bring more women to the C-suite,” said Ms. Hazard. “This is a joint responsibility of women to seek out experiences and development that can help them lead and succeed, and for organizations to create an environment where women feel empowered to progress in their careers at all levels.”

One bright spot: Though they remain outnumbered in the top ranks in many companies by their male counterparts, female chief executive officers (CEOs) seem to be outpacing their male colleagues in terms of salary, according to research by the Associated Press and the executive compensation data firm Equilar.

Last year, median pay for female chiefs increased to $15.9 million, a 21 percent gain from 2013, according to both companies. This was compared with their male counterparts’ median pay that was $10.4 million, which was a decrease of 0.8 percent from 2013. Still, of the 200 top paid CEOs in America, just 13 are women.

Check Out These Related Articles About Women In the C-Suite: