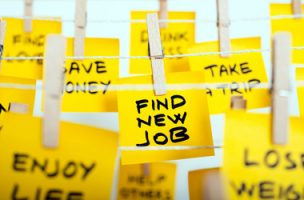 December 21, 2016 – As the New Year approaches, organizations can expect their employees to be weighing options for a career change.

According to the latest WorkSphere survey from Spherion, New Year’s resolutions for 62 percent of American workers includes making a professional change, and while this can include things like overall performance improvement, learning a new professional skill, negotiating a higher salary, embarking on a new career or starting a new business, it seems that finding a new job is at the top of most lists.

The Spherion survey, recently conducted with market research data collection firm Research Now, also found that workers who plan to start a new job or career in 2017 cite higher pay (56 percent), a desire to try something new (45 percent) and better work/life balance (44 percent) as the primary reasons they’re looking wide and deep for new opportunities. Conversely, 72 percent of the workers who do not plan to find a new job or start a new career in 2017 say they are satisfied with their current work arrangement.

Employees are virtually split on whether the New Year will bring improved job prospects. More than one fourth (27 percent) of workers think that 2017 will be a better year for jobs than 2016, while only slightly fewer (24 percent) disagree. And, despite recent optimism surrounding the current economic outlook, one third of all workers (33 percent) and nearly 40 percent of Millennials (workers ages 18-34) are more worried about the economy and its impact on their career than they were at this time last year. In addition, 20 percent of workers say that the 2016 presidential election results have impacted their 2017 professional plans.

“With the New Year approaching, it’s the perfect time for employees to take a step back and determine if they are truly happy with the trajectory of their careers, and whether they would like to make any changes to improve their current professional situations,” said Sandy Mazur, Spherion division president. “It’s equally important, however, for employers to take notice of employees’ priorities for the New Year to better meet their expectations and maximize the potential for retention and job happiness.”

Not surprisingly, “making more money” tops the list of career-related resolutions for all workers in 2017 (28 percent). However, a salary increase isn’t the only adjustment workers will consider making in the New Year. According to the survey, 40 percent of workers are interested in relocating for professional reasons, and the same is true for 62 percent of Millennials. Furthermore, 90 percent of workers who have job or career-related resolutions are interested in changing industries.

Spherion uncovered several other noteworthy trends around workers’ plans for the New Year:

West Coast is the Best Coast, According to Workers

According to another recent report, ‘Competition for Talent in the U.S.,’ released by iCIMS, 63 percent of full time employees are looking or will be for a new job. Employees spanning all generations are looking at industries outside of the current one they are working within for new opportunities. The top industries candidates are considering migrating to include technology & software, entertainment, communications, banking & finance and consulting. According to the report, 71 percent of Millennials, 66 percent of Gen Xers and 44 percent of Baby Boomers are presently looking to move to another company.

“According to our survey, not only are employees willing to leave a company, but 77 percent are willing to switch industries and a shocking 56 percent would give up their full-time job to join the gig economy,” said Susan Vitale, chief marketing officer at iCIMS. “Being aware of the underlying factors for these changes is essential, as recruiters and HR professionals try to navigate the new landscape of workers.”

With so many workers looking to find new opportunities in the New Year, it comes at a time when many companies also happen to be looking for new talent.

Eighty four percent of HR leaders say they are hiring for full time positions, according to a recent report by recruiting services company LaSalle Network. The survey also found that 70 percent of respondents feel optimistic about the economy. Leaders within the healthcare, technology, and education industries were more optimistic about their hiring plans.

“In the wake of recent political events the majority of U.S. employers are now cautiously optimistic and intend to increase or keep their headcount stable for the next three months,” said Kip Wright, senior vice president, Manpower North America. “This a positive sign for job seekers and the economy at the start of 2017.” But not all skills are created equal. “We continue to see significant differences between industries and employers demanding increasingly specific skills to fill positions. Ensuring people can prosper and businesses can compete depends on developing a U.S. workforce that is prepared for the jobs of today, tomorrow and the future.”