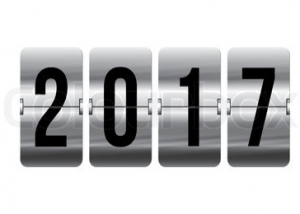 December 13, 2016 – U.S. employers are cautiously optimistic about hiring plans going into the first quarter of 2017, according to the latest ‘Manpower Employment Outlook Survey,’ released today by ManpowerGroup.

Once the data is adjusted to allow for seasonal variation, the Net Employment Outlook for the first quarter is +16 percent, a decline of two percentage points compared to the previous quarter. Anticipated hiring in the first quarter 2017 is relatively stable compared to one year ago. Employers in all 13 industry sectors covered are planning to increase their payrolls, with employers in leisure & hospitality continuing to report the strongest hiring intentions.

Of the more than 11,000 U.S. employers surveyed, 19 percent anticipate increasing staff levels in the first quarter of 2017. This is a three percent decrease from Q4 2016, and a one percent decrease from the first quarter of 2016. Six percent of employers expect workforce reductions and 73 percent expect no change in hiring plans. The final two percent of employers are undecided about their hiring intentions.

When compared with the final quarter of 2016, nationwide hiring activity is slightly stronger in the financial activities and durable goods manufacturing sectors.

“In the wake of recent political events the majority of U.S. employers are now cautiously optimistic and intend to increase or keep their headcount stable for the next three months,” said Kip Wright, senior vice president, Manpower North America. “This a positive sign for job seekers and the economy at the start of 2017.” But not all skills are created equal. “We continue to see significant differences between industries and employers demanding increasingly specific skills to fill positions. Ensuring people can prosper and businesses can compete depends on developing a U.S. workforce that is prepared for the jobs of today, tomorrow and the future.”

Payrolls are expected to grow by 17 percent at Midwest employers during the first quarter, while six percent anticipate a decrease in employment levels, resulting in a Net Employment Outlook of +11 percent. Once the data is adjusted to account for seasonal variation, hiring plans remain relatively stable quarter-over-quarter but are slightly weaker when compared with the first quarter of 2016.

Employers in 19 percent of the Northeast businesses surveyed anticipate an increase in staffing levels during the first quarter. Meanwhile, six percent of employers in the region expect payrolls to decline, and 72 percent anticipate no change, resulting in a Net Employment Outlook of +13 percent. When the data is adjusted to allow for seasonal variation, hiring plans for the Northeast remain relatively stable, both quarter-over-quarter and year-over-year, and the seasonally adjusted Net Employment Outlook for the region is the strongest reported in almost 10 years.

In the South, 20 percent of employers surveyed anticipate an increase in staffing levels during the first quarter of 2017, while five percent expect payrolls to decline. The resulting Net Employment Outlook stands at +15 percent. Once the data is adjusted to remove seasonal variations, hiring plans are slightly weaker compared with the final quarter of 2016 and remain relatively stable when compared with Q1 2016.

Hiring prospects are slightly stronger in two industry sectors across the South when compared with the fourth quarter of 2016: the information and durable goods manufacturing sectors.

Employers in 21 percent of the businesses surveyed in the West of the U.S. anticipate an increase in staffing levels during the first quarter of 2017. With six percent of employers in the region expecting payrolls to decline, the resulting Net Employment Outlook stands at +15 percent. Once the data is adjusted to allow for seasonal variation, hiring prospects remain relatively stable quarter-over-quarter and are unchanged when compared with the first quarter of 2016.

Job seekers in the region from both the professional & business services and transportation & utilities sectors can expect moderately stronger hiring activity in the next three months when compared with the final quarter of 2016. In addition, hiring plans are slightly stronger in the financial activities, leisure & hospitality, durable goods manufacturing and other services sectors. Hiring intentions remain relatively stable in two industry sectors when compared with the fourth quarter of 2016: Construction and nondurable goods manufacturing. 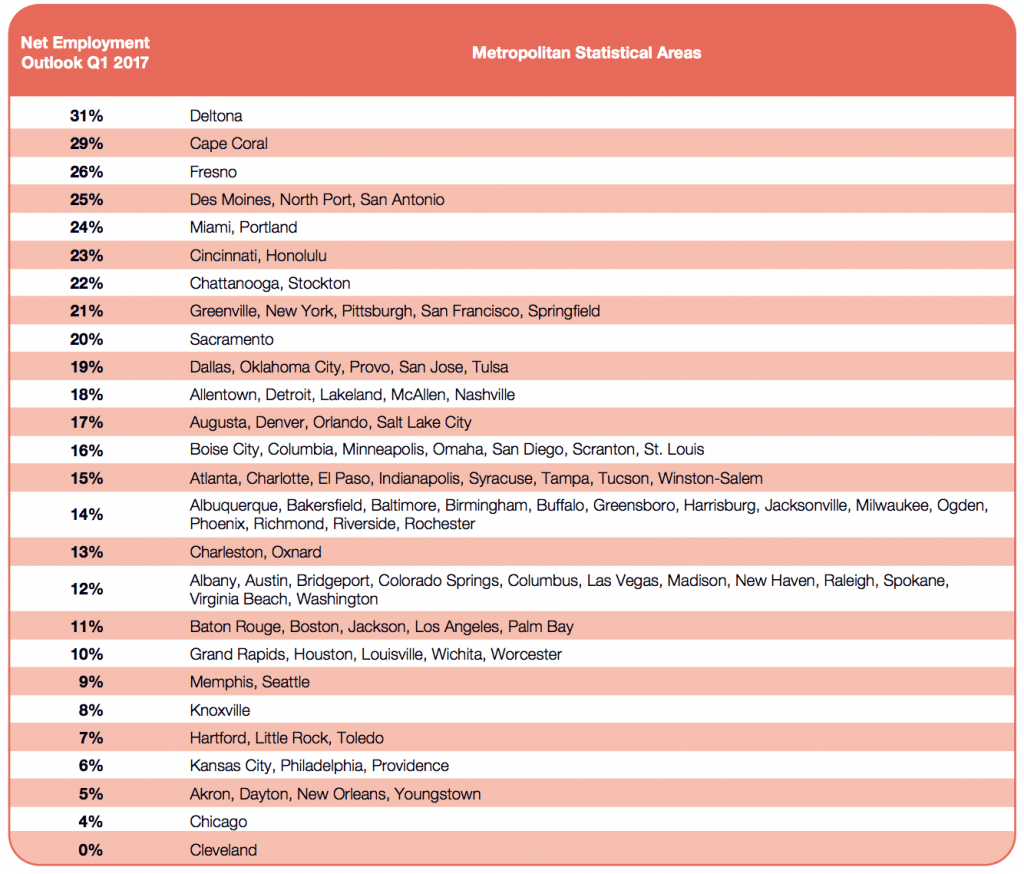 Employers added 178,000 jobs last month as the U.S. unemployment rate fell to its lowest level in nine years standing at 4.6 percent. Within professional and business services, employment rose by 63,000 in November and has risen by 571,000 over the year. Over the month, accounting and bookkeeping services added 18,000 jobs. Employment continued to trend up in administrative and support services (+36,000), computer systems design and related services (+5,000), and management and technical consulting services (+4,000). Healthcare employment rose by 28,000 in November. Within the industry, employment growth occurred in ambulatory healthcare services (+22,000). Over the past 12 months, healthcare has added 407,000 jobs.

ManpowerGroup interviewed nearly 59,000 employers across 43 countries and territories to forecast labor market activity in the first quarter of 2017. All participants were asked, “How do you anticipate total employment at your location to change in the three months to the end of March 2017 as compared to the current quarter?”

The research indicates job seekers across the globe will likely find some opportunities through the first three months of 2017. Hiring activity is expected to continue in the majority of the world’s labor markets and most outlooks remain relatively stable or improve from three months ago and last year at this time. Altogether, employers in 40 of 43 countries and territories intend to add to their payrolls by varying degrees at the start of 2017, and the survey reveals few signs that uncertainty associated with the Brexit vote or the U.S. election will result in any significant labor market volatility. Instead, employers appear content to keep a watchful eye on marketplace conditions and adjust workforce levels according to their business needs.

Overall, forecasts are mixed in comparison to the Q4 2016 and Q1 2016 surveys. Hiring plans improve in 19 of 43 countries and territories when compared quarter-over-quarter, decline in 17, and are unchanged in seven. Outlooks strengthen in 20 countries and territories year-over-year, weaken in 18, and are unchanged in four. First quarter hiring confidence is strongest in Taiwan, India, Japan, Hungary and Slovenia. The weakest forecasts are reported in Brazil, Switzerland and Italy.

Job gains are expected in nine of the 10 countries surveyed in the Americas. Hiring confidence strengthens in four countries, declines in four, and is unchanged in two when compared to the final three months of 2016. Year-over-year, hiring prospects improve in four countries but weaken in the remaining six. The strongest first quarter hiring plans are reported in both Guatemala and the U.S., while employers in Brazil expect payrolls to shrink for the eighth consecutive quarter and report the weakest hiring plans across the region as well as across the globe.

Employers expect staffing levels to increase by varying degrees in 23 of 25 countries in the Europe, Middle East & Africa (EMEA) region. When compared quarter-over-quarter, hiring plans improve in 12 countries, weaken in 10 and are unchanged in three. In a year-over-year comparison, outlooks improve in 15 countries, decline in seven and are unchanged in two. The region’s most optimistic first quarter hiring plans are reported in Hungary and Slovenia with employers in both countries expecting the strongest labor market activity since the surveys were launched in their respective countries. Conversely, the weakest employer sentiment is reported in Switzerland where the outlook slips into negative territory for the first time in two years and in Italy where labor market activity is expected to be flat in the first three months of the year.

Employers in all eight Asia Pacific countries and territories expect workforce gains in the January-March time frame. When first quarter forecasts are compared with the final three months of 2016, hiring plans strengthen in three countries/territories, weaken in three and are unchanged in two. In a year-over-year comparison hiring is expected to accelerate only in New Zealand, slow in five other countries/territories and remain unchanged in two. Taiwanese employers expect the strongest hiring pace in the region as well as across the globe. Meanwhile, Chinese employers report the region’s most cautious hiring plans.