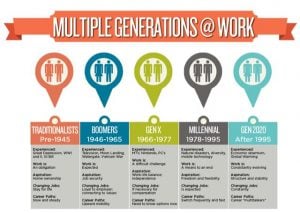 September 27, 2016 – Baby Boomers, those born between 1946 and 1964, are still some the most motivated and driven members of the workforce, according to a newly released survey by the Futurestep division of Korn Ferry.

Interestingly, the survey revealed that Baby Boomers will be working for far longer following the global recession. As a result, businesses should expect to have them in the workplace for at least five years longer and that might be dovetailing nicely with how this demographic group works with, and encourages, the Millennial generation following it.

In a survey of global executives that looked at the role of Baby Boomers, 55 percent said that they are willing to work longer hours than other generations, and were considered the second most productive generation after Gen X. Nearly a third (31 percent) felt they needed less feedback than millennials or Gen X employees, demonstrating how Boomers are also seen as reliable, in addition to hardworking.

“It’s clear from the results that the Baby Boomer generation still forms an integral part of the backbone of businesses today,” said Jeanne MacDonald, Futurestep president of global talent acquisition solutions. “There has been so much talk about Millennials in the workplace and their impact that many organizations forget that Baby Boomers are still a vital part of the workforce. Our survey has revealed that they are dedicated, hardworking and reliable, while still having a desire to drive progress.”

When asked more broadly about Baby Boomers in the workplace, more than half (54 percent) said that offering them the ‘opportunity to make an impact on the business’ was the best way to retain Boomer talent. This far outstrips the ambition of other generations; with just over a quarter (28 percent) of executives surveyed indicating that making an impact at work was the key motivator for Millennials, highlighting just how integral Baby Boomers are to businesses. The survey also revealed that employers are eager to take advantage of the experience Baby Boomers have, with 50 percent considering ‘experience and expertise’ as the main reason for bringing them into a business.

“Our survey has shown that Boomers are every bit as ambitious and passionate as other generations,” said Ms. MacDonald. “Couple this drive with extensive experience and you are presented with a force to be reckoned with in the workplace. With this in mind, employers need to ensure that they attract and retain the best talent across all generations in order to drive business success and futureproof their organization.”

The survey also reveals that the Great Recession has had an impact on the retirement plans of Baby Boomers. Eighty one percent of executives surveyed now believe that Boomers will retire at least five years later than they had planned prior to the recession, with 31 percent saying they will retire 10 years later or more. In addition, 43 percent of respondents say Baby Boomers in their organization will retire at age 66 or older.

“In my experience, many boomers have been financially challenged by the economic malaise of the 70s and three significant economic disruptions in 1988, 2001 and 2009,” said Hilary Pearl, founding partner of Pearl Associates, an executive coaching and organizational consulting firm.

“They have watched their housing and overall asset value decline. Because of workforce automation and the technology revolution, many traditional jobs have disappeared while emerging jobs required new skills — and boomers have had to raise their game,” she said. “Boomers, who define their personal identity through professional success, make great employees,” with personal values of self-reliance, hard work and achievement balanced by a preference for collaborative problem solving, decision making and team work.

“While many in the Baby Boomer generation are working longer to provide more financial security after seeing their retirement account balances tumble during the Great Recession, their desire to extend their careers is not entirely financially motivated,” Ms. MacDonald agreed. “What is often overlooked is the fact the majority of the people in this generation are highly motivated, enjoy what they do and they provide great experience and value within the global workforce.”

A Closer Look Into the Study

When asked what matters most to Baby Boomers, 41 percent said job stability, 24 percent replied ability to make a difference, 14 percent said work / life balance, 11 percent income and 10 percent responded visibility and buy-in into the mission / vision of the organization.

Work ethic among this age group also remains strong compared to other generations, with 55 percent of Baby Boomers saying they are much more willing to work longer hours and weekends. Twenty percent said they are somewhat more willing and only five percent responded much less willing.

When asked what will make you choose one job over another the responses varied. Twenty nine cited location / ability to stay near family, while 22 percent said management responsibilities were the key factors. Nineteen percent said visibility and buy-in into the mission / vision of the organization, 16 percent responded said title and pay, and 14 percent said they were looking for a clear path for advancement.

Fifty four percent of Baby Boomers say the best way to retain talent from this age group is to provide an opportunity to make an impact, while 22 percent say creating a culture that aligns with their values. Management responsibilities, ensuring work / life balance and regular pay raises / promotions followed at 10 percent, eight percent and six percent, respectively.

A Look From the Employer Side

When companies were asked what was the main reason for hiring Baby Boomer talent, 50 percent of employers said past experience and expertise, 24 percent said their ability to help cultivate and manage younger workers, while 17 percent responded with work ethic and the remaining nine percent said the impact they have upon workplace culture.

When looking at which generation is the most productive, an overwhelming amount of respondents (62 percent) said Gen X, followed by Baby Boomers (28 percent), Millennials (10 percent), and Gen Z (one percent).

A separate recently-released study by Future Workplace and Beyond found that 83 percent of respondents have seen Millennials managing Gen X and Baby Boomers in their office. However, 45 percent of Baby Boomers and Gen X respondents feel that Millennials’ lack of managerial experience could have a negative impact on a company’s culture. In addition, over one third of Millennial respondents said that it’s difficult managing older generations.

“As more Baby Boomers retire, Millennials are moving into leadership positions and are faced with managing older generations, which they were never trained to do,” said Dan Schawbel, partner and research director at Future Workplace. “Millennials need to respect and support the needs and careers of Gen X and Baby Boomers if they want to learn, develop and eventually become the executives corporate America requires to move forward.”

The Futurestep report asked companies if they felt Baby Boomers will have the relevant tech / digital skills needed in the next five years. Forty nine percent said they only had some of the tech skills needed, 29 percent said their Baby Boomer employees stay up-to-date on the latest tech / digital skills, while 22 percent rely on younger generations to fulfil technology demands.

“Our observations support the Korn Ferry survey. There appears to be an interesting dynamic developing in the workplace: some baby boomers are retiring, causing — in some cases — the need to find a replacement,” said Tom Gilman, CEO of search firm Gilman Partners. “Others want to work a more flexible schedule, creating the need to have practices to support such efforts. And still others want to keep working full time which may limit advancement opportunities for younger workers while also requiring employers to effectively manage a three generational workforce. It’s an interesting time!”

Millennials Cite Impact As Critical Factor In Choosing Next Job What Companies Are Looking for In Younger Workers Social Media Now No. 1 Global Platform for Finding Talent Struggling to Hire Millennials? Here's How To Get Them Onboard