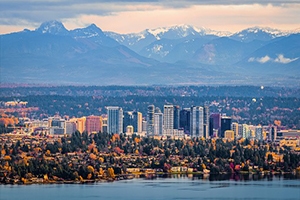 April 27, 2018 – Stanton Chase International is continuing with its growth strategy, recently opening a new office in Seattle. David Kimbro, a senior executive search veteran of almost 20 years, has joined the firm as managing director of the new location.

“We are honored to have David’s leadership in our new Seattle office,” said Daniel Casteel, managing director of the Nashville office and regional vice president for North America. “Seattle is a prime location, and we believe this addition will greatly benefit our domestic and international clients. David’s extensive network, particularly in the technology, financial services, consumer and industrial industries will certainly be an added benefit.”

With broad experience in functional leadership across the C-suite, Mr. Kimbro’s clients range from start-ups to large public companies. Previously, he was a managing partner with Seattle-based recruiting firm Spexsearch. Before that, he was a senior partner with Allen Austin, and prior to that was a managing director with Herd Freed Hartz. Earlier in his career he worked for Laurel Group as well as Korn Ferry.

“Stanton Chase’s collaborative business model among the offices provides a distinct advantage to our clients, and I believe the expansion into Seattle will provide further benefits for all stakeholders,” said Mr. Kimbro.

Seattle’s economy is driven by a mix of older industrial companies, and “new economy” internet and technology companies, service, design and clean technology companies. The city is a hotbed for start-up businesses, especially in green building and clean technologies, being ranked as America’s No. 1 “smarter city” based on its government policies and green economy. Four companies on the Fortune 500 list of America’s largest companies, based on total revenue, are headquartered in Seattle: Internet retailer Amazon, coffee chain Starbucks, department store Nordstrom and freight forwarder Expeditors International of Washington.

Stanton Chase began the year by opening an new office in Washington, D.C. Jeff Perkins was appointed managing director of the location. Mr. Perkins has vast experience in leadership consulting and executive development as CEO of Huntbridge, a leadership consulting firm that provides hand-crafted solutions for talent leaders.

Stanton Chase has appointed new leaders in several of practices over the past year. In December, the firm added Scott Clark as managing director in its industrial, engineering and construction practices. An experienced human resources executive, Mr. Clark has placed hundreds of senior executives in a variety of functions across these sectors.

In September, Peter Deragon, the managing director of the Los Angeles office of the firm, was named global sector leader for the carriers, third party & contract logistics practice. Mr. Deragon, who is also the North American leader for the financial services practice group, has more than 30 years of experience in operations management, institutional sales and executive search consulting.

In August, the firm named Hans Nilsson as aviation & aerospace global sector leader. He will work out of the firm’s offices in Zurich and Miami. Mr. Nilsson has more than 25 years of industrial and management consulting experience in the aviation, aerospace, transportation and technology industries.

Cathy Logue, managing director of the firm’s Toronto office, was also named leader of the CFO & financial executives practice group. She has over 25 years of executive and leadership search experience with a primary focus on senior leadership roles within the technology, fintech and media & communications sectors.