Stay Connected:
Founded in 1731 by Benjamin Franklin, America's oldest cultural institution turned to a non-profit recruiting specialist to find its next leader. Let's go inside the search. 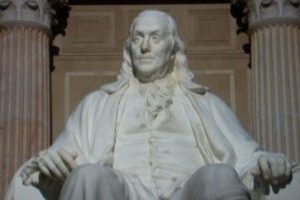 Founded in 1731 by Benjamin Franklin, it is America’s oldest cultural institution and served as the Library of Congress from the Revolutionary War to 1800. The mission of The Library Company is to foster scholarship in and increase public understanding of American history before 1900 by preserving, interpreting, making available, and augmenting the valuable materials in its care, thus providing meaningful stewardship of the legacy of Benjamin Franklin.

Dr. Barsanti has had a distinguished career in the Philadelphia cultural community that includes positions at the Rosenbach Museum and Library, the Pew Center for Arts and Heritage, and the Free Library of Philadelphia Foundation. He is also an adjunct professor at Drexel University and serves on the board of trustees of the Independence Charter School.

His experience has been broad in fundraising, program development, membership, marketing, and operations. Additionally, he founded Throwaway Horse, a company devoted to fostering a deeper understanding of literary masterworks by joining the visual aid of graphic novels with the aid of the internet and social media. He has worked closely on its flagship project, ULYSSES “SEEN,” a graphic novel adaptation of James Joyce’s Ulysses that brings the novel’s deeper mysteries to a new set of readers.

“We are thrilled to have Mike join The Library Company’s highly acclaimed staff of scholars, curators, and professional administrators,” said Howell Rosenberg, chairman of the board of trustees of The Library Company of Philadelphia. “Mike’s business and academic work will be among the keys to success that he will bring to us and we are thankful that we were able to attract such a high level professional.”

“Most important, we hired the person that has the highest probability of success and we did it on time and on budget,” said Charles Landreth, library treasurer and chairman of the search committee. “Phillips Oppenheim understood that we need a new kind of leader; not a ‘librarian’ but a scholar who can run a business and who can not only write a strategic plan but can execute it and raise enough money that will ensure the next 300 years of The Library Company of Philadelphia.”

“Phillips Oppenheim did their job as advertised,” Mr. Landreth noted. “They coached us through a position description, they provided preliminary screening of candidates and they offered advice and counsel as we moved to the final interviews.”

“On Benjamin Franklin’s 311th birthday, we can take pride in how his library has endured, and the idea it is based upon –improving a community through the sharing of knowledge — has never been more relevant,” said Dr. Barsanti. “I am eager to carry forward Dr. Franklin’s great experiment and bring it to new learners from all walks of life, ensuring its continued relevance and its adaptation to a changing world.”

The firm has recently recruited senior leaders for other non-profit organizations, including Matthew Teitelbaum as executive director of the Boston Museum of Fine Arts; Salvador Salort-Pons as director, president and CEO of the Detroit Institute of Arts (DIA); Linda McNeil Tantawi as CEO for the Greater New York City Affiliate of Susan G. Komen for the Cure; and Judge Judy Harris Kluger as executive director of Sanctuary for Families. The firm was also recently picked by the Apollo Theater to lead its search for a new executive producer. Executive search consultant Sandi Haynes is leading that search.

Just recently, Phillips Oppenheim was given the honor of leading the prestigious director search for the Barack Obama Presidential Museum in Chicago. Principal Sarah James and partner Becky Klein are heading the assignment.

Ms. Meade, one of the recruiters who handled the library search, joined Phillips Oppenheim 12 years ago after a career as a government affairs executive in the financial services industry. Through her work, she has developed a network of relationships with legislators, as well as members of trade associations and leaders within numerous corporations, political and nonprofit organizations.

Ms. Jones, who co-led the assignment, has been a principal, on a project basis, with Phillips Oppenheim for 25 years. Before that, she spent 10 years at Harvard University as an administrator where she designed and ran the first Career Services Office at the John F. Kennedy School of Government.

Like most other sectors, libraries are anticipating high turnover as aging baby boomers continue their migration into retirement. A recent American Library Association study projected that 28 percent of U.S.-based working librarians are expected to retire by 2020.

As a result, search firms that service the sector are busier than ever. Here is a brief look at what other search firms are doing to help find library leadership around the nation taken from the Hunt Scanlon Media archives:

Check Out These Related Articles On Searches for Historical Organizations: