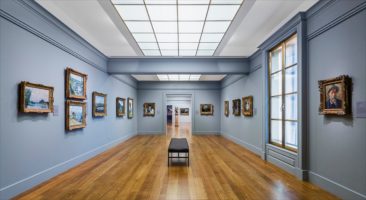 June 15, 2016 – Korn Ferry has recruited Olivier Meslay as the new director of the Clark Art Institute. He becomes the organizations fifth director and succeeds Michael Conforti, who led the institution for more than 20 years.

Naree Viner led the assignment. Ms. Viner is an expert in museum leadership recruitment and has placed directors in the last six months at the Milwaukee Art Museum, the Harvard Art Museum, the Wadsworth Atheneum, The Menil Collection and the Museum of the City of New York. She is currently leading the director search for the Smart Museum of Art at the University of Chicago.

Mr. Meslay, an accomplished museum professional and noted scholar, currently serves as associate director of curatorial affairs, senior curator of European and American art, and The Barbara Thomas Lemmon Curator of European Art at the Dallas Museum of Art (DMA). He brings more than 35 years of international experience to his role. Mr. Meslay was unanimously elected to the position during a special session of the Clark’s board.

“We are thrilled to welcome Olivier Meslay as our new director,” said Andreas Halvorsen, chairman of the Institute’s board of trustees. “Olivier’s vision, international experience, and exceptional academic and curatorial qualifications match the Clark’s ambitious aspirations. He comes to the Clark with a deep appreciation for our academic mission, an expert understanding of our museum program, and an energetic perspective on ways to enhance our dual mission and extend the Clark’s reach and impact.”

Since assuming his current position in 2012, Mr. Meslay has overseen the DMA’s European and American art collection of more than 4,000 paintings, sculptures, and works on paper, and has managed the museum’s curatorial department, conservation program, and art research library. He has also served as the DMA’s curatorial representative with the French American Museum Exchange (FRAME), a collaborative organization of 30 American and French museums. Mr. Meslay also served as the DMA’s interim director from 2011–2012, managing a staff of 250 employees, directing an extensive fundraising program, and coordinating donor relations that have provided continuing support for the museum.

“Olivier first came to know the Clark as a fellow in our research and academic program in 2000, and it was clear from the very beginning that he had a deep affinity for the Clark and for the unique relationship between our museum and research programs,” said Francis Oakley, the Clark’s interim director. “It is heartening to see such a long relationship culminate in this way. Olivier’s passion for the Clark and for Williamstown and the Berkshires, combined with his extraordinary scholarship and leadership, hold great promise for the future.”

Mr. Meslay, who will take over in August, said: “I think my vision over the next years is to maintain the identity of the Clark in this new environment. I don’t have to think about any building or expansion. I have only to think about adding to it without changing the magical aspect of the place.”

The Clark Art Institute, located in Williamstown, MA, is one of a small number of institutions globally that is both an art museum and a center for research, critical discussion, and higher education in the visual arts. Opened in 1955, The Clark houses exceptional European and American paintings and sculpture, extensive collections of master prints and drawings, English silver, and early photography.

Korn Ferry has recently conducted a number of searches for museum leaders. The firm recruited Martha Tedeschi as director of the Harvard Art Museums as well as Rebecca Rabinow as the new director of The Menil Collection in Houston.

Check Out These Related Articles On Executive Recruiting for Museums: